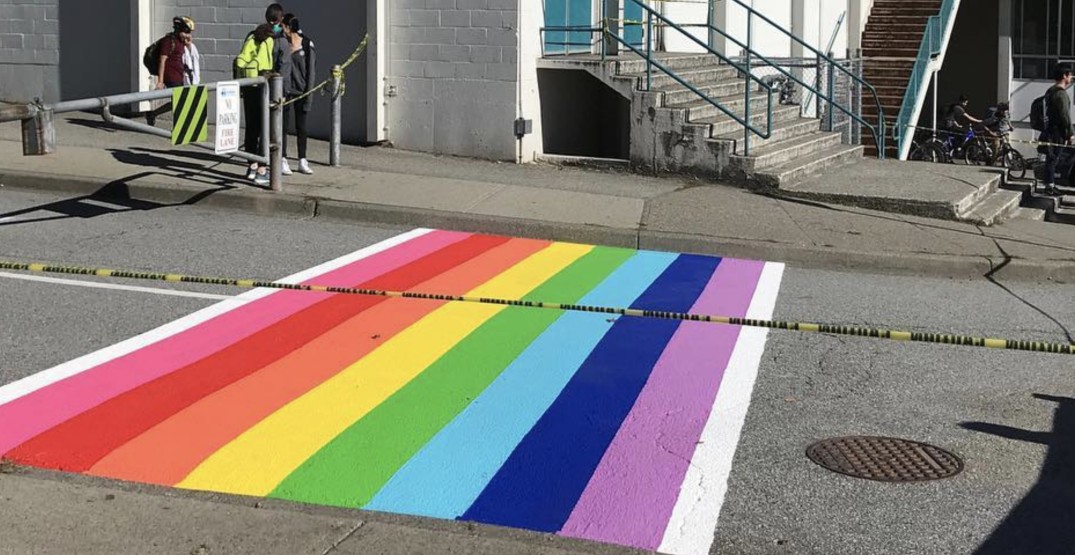 Four teens will go through the Burnaby RCMP’s Restorative Justice Program after vandalizing a rainbow crosswalk at Moscrop Secondary School.

According to Burnaby RCMP, officers responded to a complaint of offensive graffiti spray painted on the school’s rainbow crosswalk on November 26.

The rainbow crosswalk symbolizes support for the LGBTQ community and was completed at the school last month.

According to Cpl. Daniela Panesar of the Burnaby RCMP, the two teen boys and two teen girls were involved in the incident.

“Each has admitted their role in defacing the crosswalk,” said Panesar, in a statement, noting that one of the teens returned to the crosswalk and tried to remove the offensive slur.

“A member of Burnaby RCMP’s Youth Investigative Team has taken over this investigation and has spoken with each teen and parents. All were made aware of how serious an incident this was and what the possible criminal justice outcomes could be,” said Panesar.

Due to the fact that each teen admitted to their actions, showed remorse, and had no previous history with police, they will go through the RCMP’s Restorative Justice Program.

“This program will allow each of the teens to take responsibility for their actions and to be actively involved in repairing the harm they have caused,” noted Panesar.

This is not the first time there has been an act of vandalism on an LGBTQ rainbow crosswalk in Metro Vancouver.

Last year,  someone used their car to create dark skid marks on the crosswalk in Fort Langley and this past summer paint was splattered over Surrey’s rainbow crosswalk.