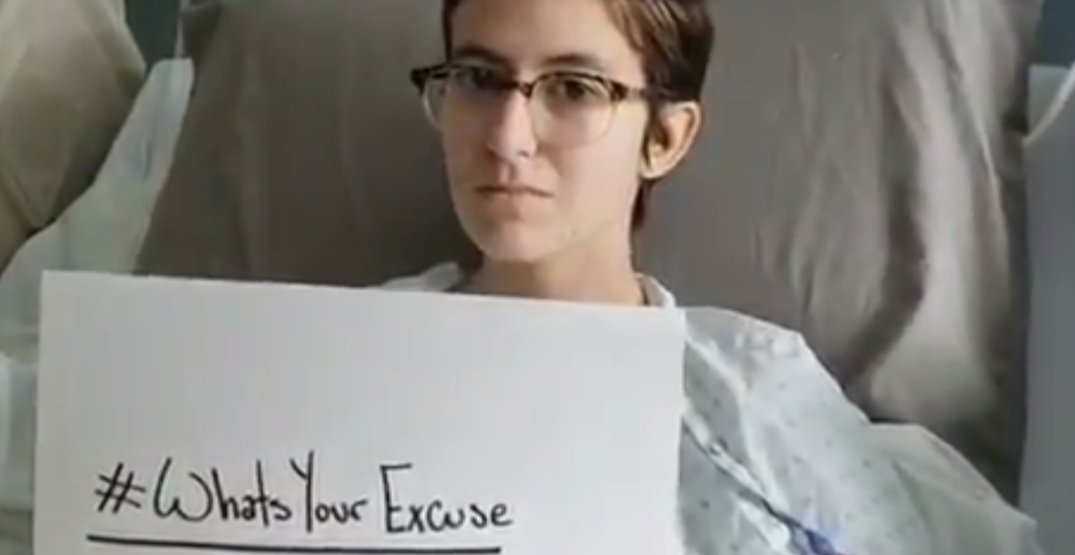 Maddison Yetman had been looking forward to voting in her first federal election since junior high school, but she never expected it to be her last.

The 18-year-old from Winnipeg recently received a cancer diagnosis and was told she has days or weeks to live.

She decided to use some of her precious last moments to encourage others to head to the polls on October 21.

The video shows Yetman holding up cards with hand-written messages saying she managed to vote despite having terminal cancer. The final card reads: “#WhatsYourExcuse.”

Six hours after the video was posted, it had been viewed about 47,000 times.

Brent Williamson said his niece is a motivated, creative and politically minded young woman. So, it came as no surprise when she asked him to help create the video.

“At her young age she understood how important our democracy is and our political system, and really wanted to play a part in it,” he said.

Yetman had been feeling a bit sick for a few days, with achy bones and sore joints, when her family got together for brunch on October 6. They took her to a medical clinic when her symptoms worsened. Soon after, she was admitted into the Health Sciences Centre’s cancer ward.

Within five days, Yetman learned she has a type of cancer called sarcoma. It has spread  through her body, into her blood and bone marrow.

She was given days to weeks to live, Williamson said.

However, it was still important for Yetman to take part in the democratic process. She cast her vote from her hospital bed.

“She has time left on this Earth that is measurable in hours and she took time to vote,” Williamson said. “And yet 30 to 35% of Canadians won’t bother to go vote.”

Yetman tweeted about her voting experience, and that’s when her family began talking about making the video.

It took a handful of white cards, a black marker, 10 minutes, a couple of takes and lots of laughter, Williamson said.

Yetman is glad her message is being shared, her uncle said. She now wants to focus on the time she has left with family and friends.

“Time is precious. You never know when people are going to be taken away,” Williamson said.