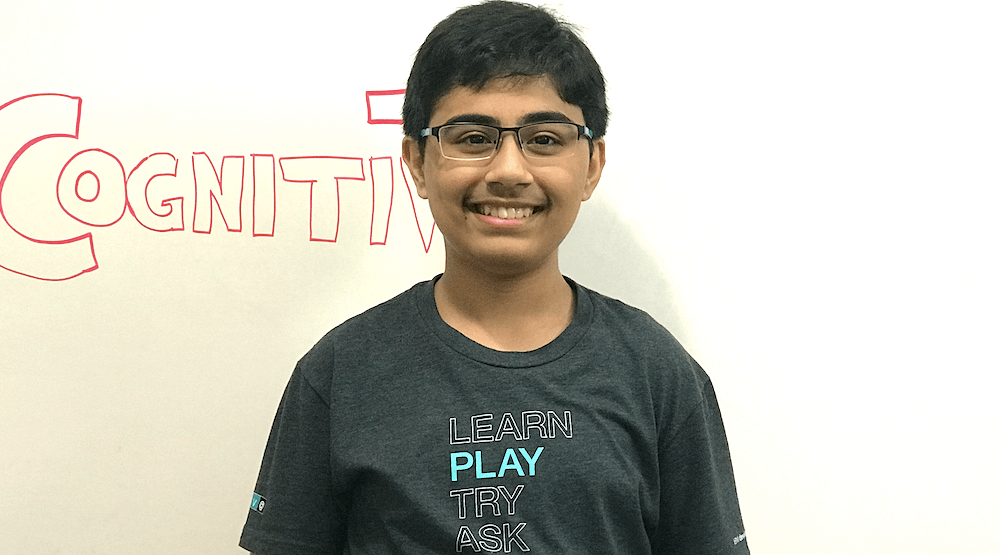 13-year-old tech-whiz Tanmay Bakshi will be speaking at the #BCTech Summit (Image: Submitted)

At 13-years-old, Tanmay Bakshi has a resume that would put most adults to shame.

And on March 15, Bakshi will be coming to Vancouver as a keynote speaker at the #BCTECH Summit’s Youth Innovation Day.

‘It really just fascinated me’

The #BCTECH Summit is not the 13-year-old’s first speaking gig. From England to India, Bakshi has toured the world to share his knowledge about tech and programming.

Bakshi says his interest in tech started when he was in kindergarten.

“It actually all began when I was five years old,” Bakshi told Daily Hive, adding that his curiosity grew from his father, who also worked as a computer programmer.

“It really just fascinated me (…) how computers could just do anything,” Bakshi said.

From then on, Bakshi’s interest in all things computer-related continued to grow, and in 2013 he developed his own app.

“When I was nine-years-old, my very first app, TTables, was accepted onto the Apple App store,” Bakshi said.

Bakshi’s TTables is a multiplication app designed to help kids with math.

Now, the teen is taking his app development to the next level, incorporating artificial intelligence and more advanced operating systems into his work.

“I’m not just doing any regular app development, I’m really focusing on including really powerful technologies in my (apps),” he said.

From IBM to table tennis

In 2015, Bakshi came across a documentary about IBM’s supercomputer Watson, and from there, he became intrigued by machine learning.

“Since then, I really thank Watson for starting my journey into the machine learning cognitive world,” said Bakshi.

He has also taken his knowledge to YouTube where he gives tutorials on various programming systems and subjects such as math and science.

With his talks, books, and YouTube channel, Bakshi says he hopes to teach coding to at least 100,000 beginners around the globe.

There’s no doubt Bakshi is probably one of the busiest 13-year-olds in the world.

To keep up with his demanding tech career, the young teen is homeschooled, making it easier to balance his schedule.

But when he’s not speaking in front of thousands of people, or figuring out a new coding program, Bakshi likes to kick back and have fun like a regular kid.

“Table tennis is my favourite indoor sport and I love biking,” he said, adding that baking and watching movies are some of his other favourite pastimes.

Ultimately though, Bakshi’s true passion is computers and teaching others how the world of tech can open endless possibilities.

“For me, I have set out on a journey (to) learn as much as I possibly can and share all the knowledge that I learn about,” he said.

Bakshi is now preparing to take the stage at the #BCTECH Summit’s Youth Innovation Day and he says he’s looking forward to connecting with young people.

“Youth are really looking for those opportunities in technology,” he said.

BC has made a strong effort to incorporate tech into education. In 2016, Premier Christy Clark announced public school students in BC would learn how to code as part of the province’s new curriculum.

“That is absolutely great news,” said Bakshi, adding that the curriculum makes it easy for students to learn exactly how and where to code.

Bakshi says he will touch on education and cognitive computing in his keynote speech, by using Watson’s computing platform.

“My keynote will essentially focus on what I believe to be really important for our youth … which would be cognitive computing and artificial intelligence,” he said. “I think it will be a great summit for youth.”

For Bakshi, speaking at Youth Innovation Day is a way for him to connect with others about a subject he loves.

“Not only am I learning as much as I possibly can, but I also want to share all (of my) knowledge,” said Bakshi.

“The more knowledge I create, the more videos, books, and talks that I make, the more people reach out to me and I am able to help them learn.”