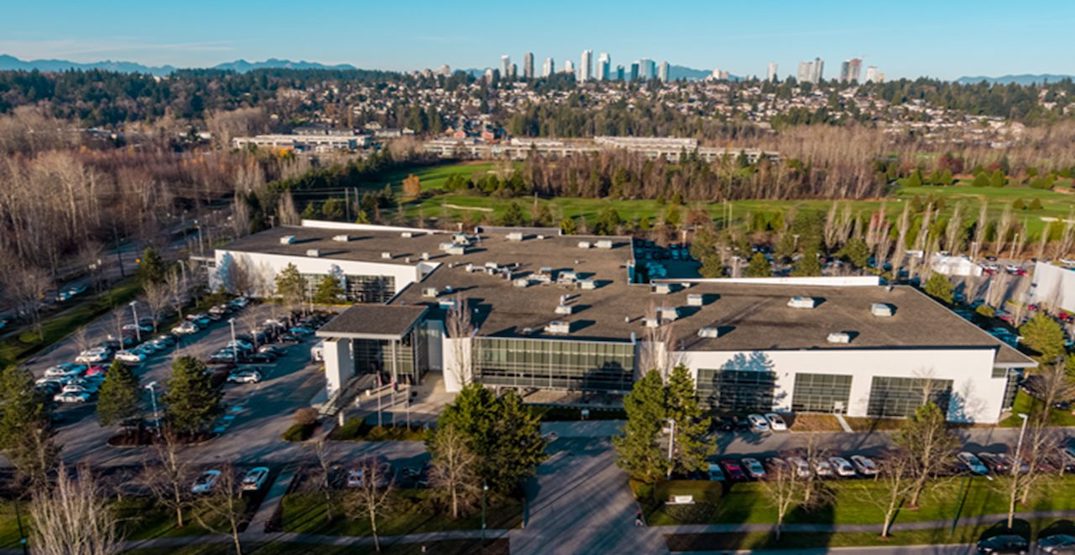 A major office and industrial property currently used as the Canadian headquarters office of Best Buy will become the new headquarters and manufacturing facility for Svante.

The carbon capture company has announced plans to take over the entirety of the 141,000 sq ft complex at 8800 Glenlyon Parkway, located in the Big Bend industrial area in South Burnaby, for its new Centre of Excellence for Carbon Capture Use and Storage (CCUS), according to JLL’s 2021 second-quarter commercial real estate report.

This will allow Svante to scale up its manufacturing operations to produce its commercial-scale structured absorbent filters, which can recover up to 95% of the carbon dioxide emissions produced from the use of fossil fuels in electricity generation and industrial processes — effectively preventing carbon dioxide from entering the atmosphere. As well, the facility offers the ability to test its proprietary rapid absorption machine designs.

As previously reported by Daily Hive Urbanized, Best Buy is vacating its longtime home in Burnaby for a new downsized office at 426 West 6th Avenue near SkyTrain Olympic Village Station. Best Buy will occupy 77,500 sq ft of office space within the top five floors of the new 10-storey building currently under construction. Completion is anticipated for early 2022.

Best Buy has about 1,200 staff members, but it plans to permanently transition into a semi-remote work system. The new office will have just half the capacity for up to about 600 office workers. 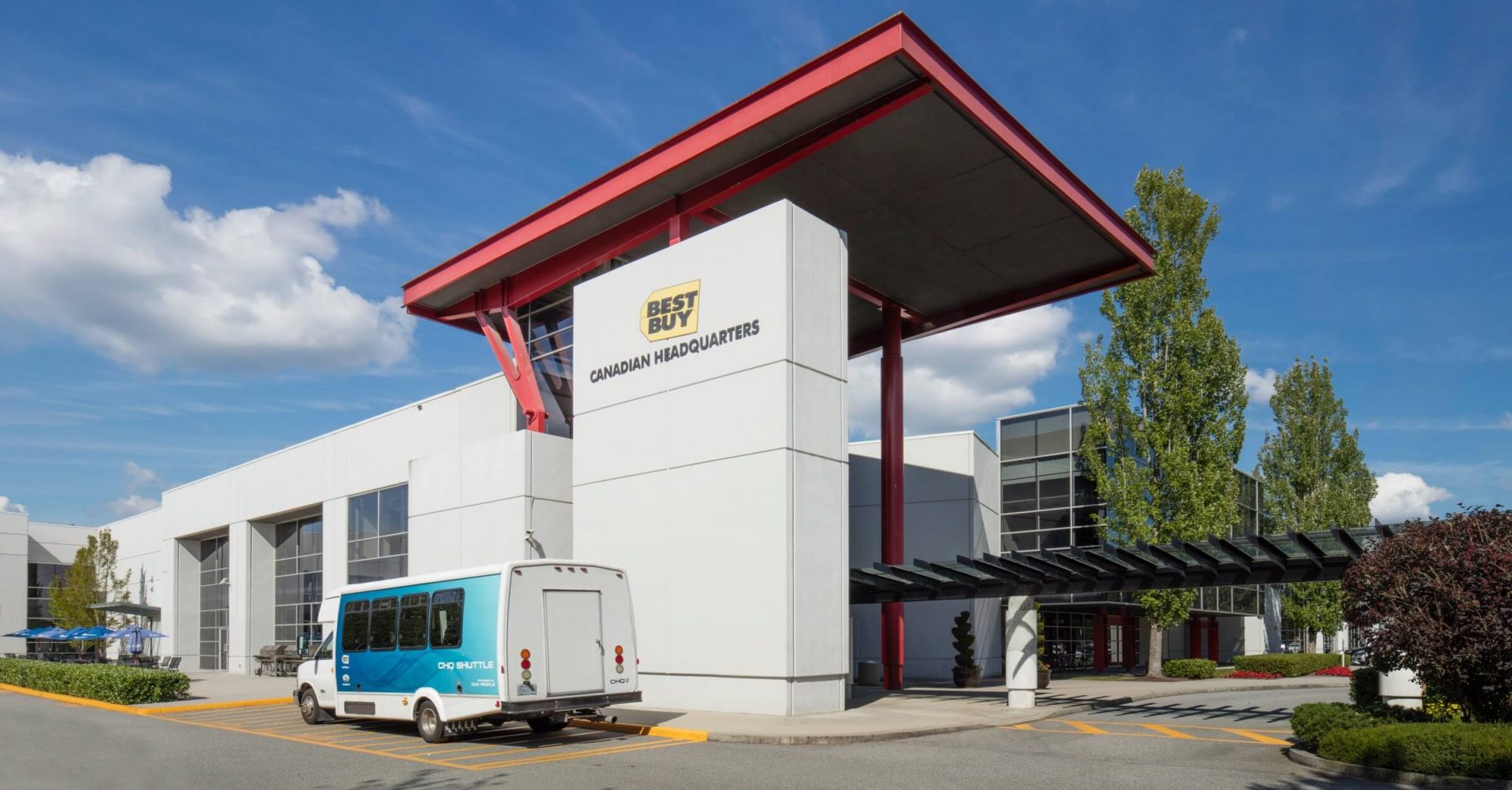 Svante currently has a small headquarters nearby in the Big Bend area, and a small research facility near SkyTrain Production Way-University Station.

The company’s big expansion into 8800 Glenlyon Parkway is made possible by the federal government’s announcement earlier this month of a CAD$25 million investment from the Strategic Innovation Fund’s Net Zero Accelerator to support the industrialization and commercialization of the firm’s novel low-cost carbon capture technology within the North American market.

“We are keen to partner with Canadian companies like Svante that are creating clean technologies that will help key industries around the world, including in Canada, significantly cut down their greenhouse gas emissions,” said Francoise-Philippe Champagne, the federal minister of innovation, science, and industry.

“This project will create good jobs in Burnaby and Vancouver in clean technologies, and it will grow Canada’s leadership in this increasingly important sector of our economy.”

Since it was founded in 2007, Svante has attracted over USD$195 million in funding to develop and commercialize its technology at half the capital cost of conventional engineered solutions. This includes a major equity financing investment of USD$25 million made by Alberta oil sands giant Suncor Energy in March 2021.

The company’s technology is already being used by a cement plant in Richmond that re-injects captured carbon dioxide into concrete, an industrial facility in Lloydminster, Saskatchewan, and a Chevron facility near Bakersfield, California.

“’Vancouver is the Silicon-Valley of carbon capture technology development and we are very proud to anchor our World Headquarter, R&D and Engineering test centre, and first commercial filter manufacturing plant in Canada,” said Claude Letourneau, president and CEO of Svante.

“Lowering the capital cost of the capture of the CO2 emitted in industrial production is critical to the world’s net-zero carbon goals required to stabilize the climate. Leaders from industry, financial sectors and government agree on the enormity of the challenge and the critical need to deploy carbon capture and carbon removal solutions at Gigatons scale. The carbon pulled from earth as fossil fuel needs to go back into the earth in safe CO2 storage.”

JLL’s commercial real estate report also states Scotiabank has leased an additional 82,000 sq ft of office space at Scotiatower at 650 West Georgia Street in downtown Vancouver. The building’s lower levels are currently undergoing major renovations that integrate it with the adjacent new Vancouver Centre II office tower at 753 Seymour Street, which is expected to reach completion in late 2021 or early 2022. 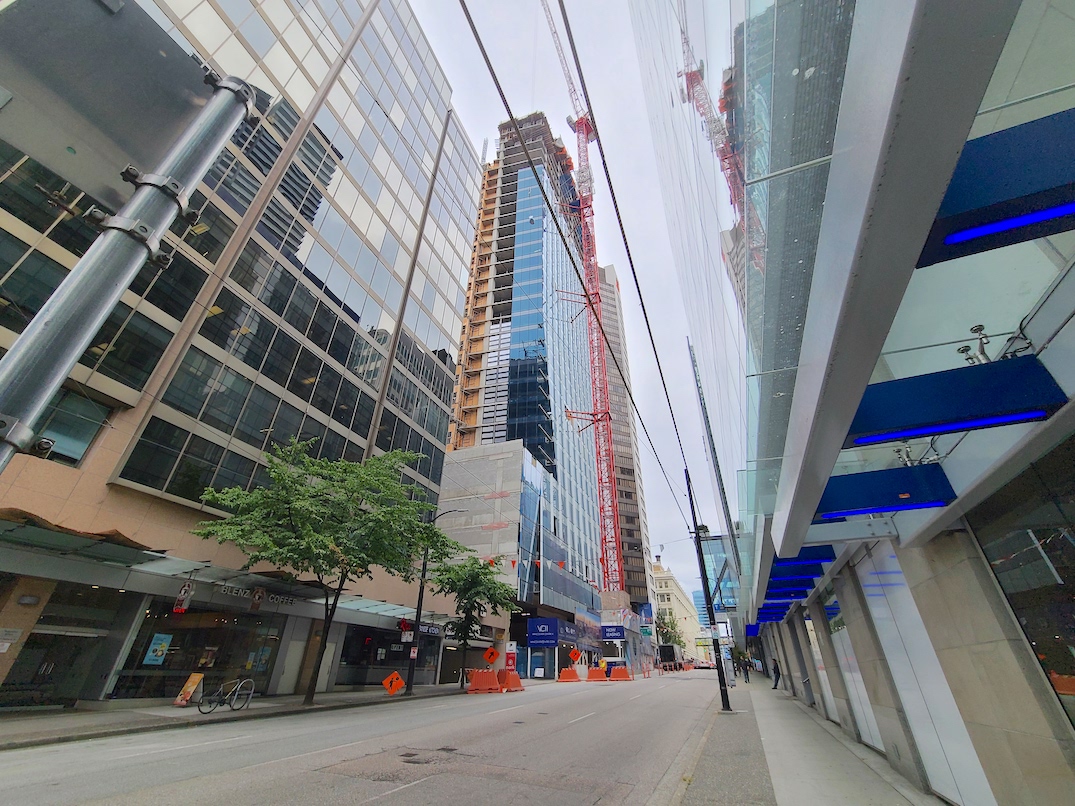 Despite economic and pandemic workplace conditions, Metro Vancouver’s office market, especially the major submarket of downtown Vancouver, remains very strong, with a regional office vacancy rate of 6.8% at the end of the second quarter, according to JLL.

In downtown Vancouver, over 3.7 million sq ft of office space currently under construction is expected to reach completion within the next 30 months, with 63% of this space already pre-leased. Downtown Vancouver continues to have the lowest office vacancy rate amongst major city centres in North America.

The office vacancy rate will continue to increase, but only slightly, despite the amount of space being preleased — a sign of healthy long-term office demand in this region.

Most of the new leasing activity is from businesses seeking higher-quality space offered by the new Class A office spaces, leaving the older, lower-quality Class B and Class C spaces.