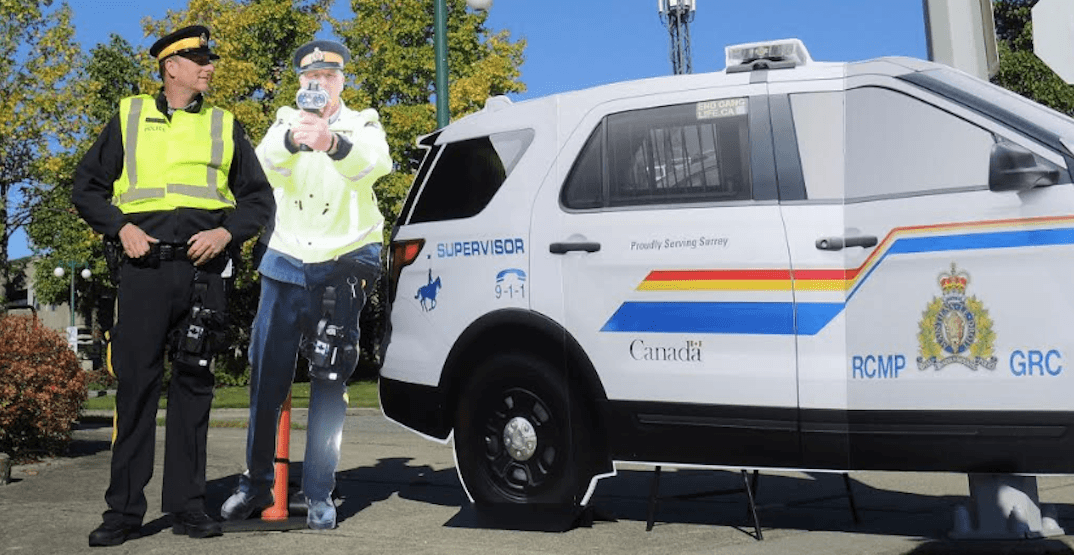 Can you spot the difference? (Surrey RCMP)

Following similar campaigns in cities such as Coquitlam and Kelowna, Surrey RCMP said this week they have now deployed their “newest recruit” in a city-wide effort to target dangerous driving: A life-size cutout of a police officer.

According to police, these “Mountie Cut-Outs” will be set up at intersections and roadways around the city that have been identified as high-risk for collisions and unsafe driving behaviours.

“These may be just two-dimensional versions of our frontline members and marked police vehicles, but we are warning drivers that our ‘Mountie Cut-Outs’ may just have a real-life partner nearby,” said Surrey RCMP Sgt Ian MacLellan. “Our aim is to reduce the number of serious injuries and fatalities on Surrey’s roadways, through education and enforcement.”

In developing the initiative, Surrey RCMP said it worked in close partnership with Vision Zero Surrey and ICBC to “not only develop this initiative, but to identify high-risk driving locations and then target those locations with enforcement projects.”

As part of the campaign, police said Vision Zero Surrey will deploy data collection devices at those high-risk driving locations and the data will be used to assess the impact of the ongoing enforcement project.

And while the cut-out may be the latest in the Surrey RCMP’s toolbox against unsafe driving, police said they still encourage the public to report any dangerous driving they witness in our community by contacting them at Surrey RCMP at 604-599-0502.