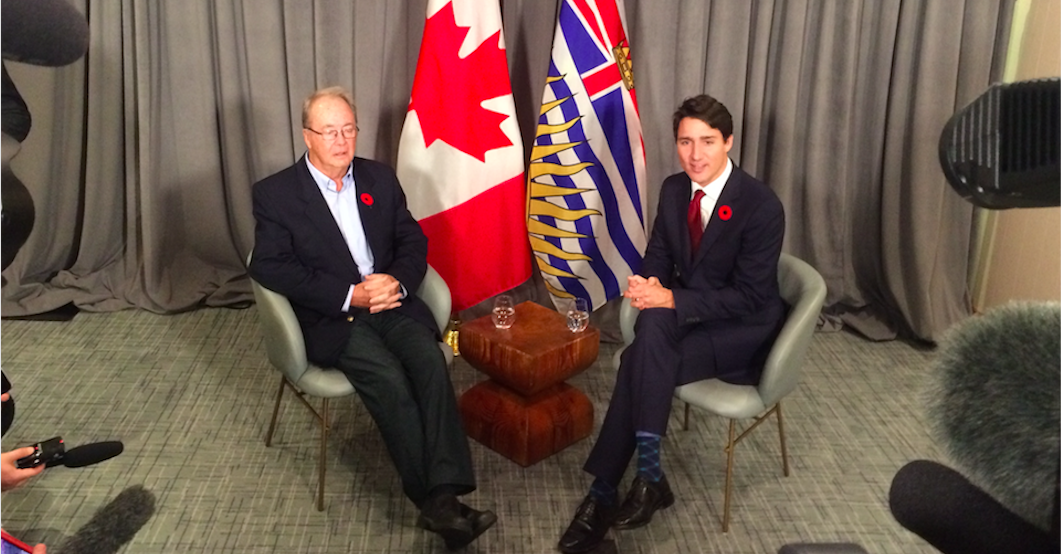 Surrey-elect Mayor Doug McCallum is sticking to his guns when it comes to his much publicized plan to scrap the proposed LRT project in Surrey in favour of SkyTrain.

On Thursday, McCallum met with Justin Trudeau for the first time in downtown Vancouver, shortly after the Prime Minster’s first meeting with Vancouver Mayor-elect Kennedy Stewart.

While neither took questions during the closed-door meeting, McCallum said afterwards that he and Trudeau had a “good” discussion.

“I appreciated that the Prime Minister took the time to sit down and listen to the concerns of the residents of Surrey,” he said. “It was a great opportunity for us to put forward our ideas both on our city police and also on SkyTrain.”

McCallum said Trudeau asked him, among other things, when the city planned to make the motion to cancel light rail and “go to” SkyTrain.

“I advised him were going to do that on Monday’s council meeting – this coming Monday,” said McCallum. “Once we do that the next step is to go to the Mayors Council and get a motion… to change the technical part of the 10-year-plan from light rail to SkyTrain.”

Asked if the Prime Minister was in fact, okay with Surrey moving from LRT to SkyTrain in the face of federal funding already being secured, McCallum responded; “We actually didn’t talk about that. But he did say that he respects what the motion will be in the Mayors Council as far as switching the technology from light rail to SkyTrain.”

McCallum’s comments come on the heels of a comment from Liberal MP Ken Hardie, who represents Surrey’s Fleetwood-Port Kells riding.

Last week, Hardie told Daily Hive that the federal government’s answer is “yes,” as the allocated federal funding can be switched from LRT to SkyTrain.

But he, added, it’s is up to the municipal and provincial levels to make the first moves.

This is dependent on TransLink and its Mayors’ Council changing its 10-year plan, which currently specifies the SNG LRT. Changes to this plan would also need to be supported by the provincial government before the federal government will consider the request.

“If there’s to be a change in the technology and the route, Surrey will need to discuss these changes to the plan with Metro Vancouver,” said Hardie.