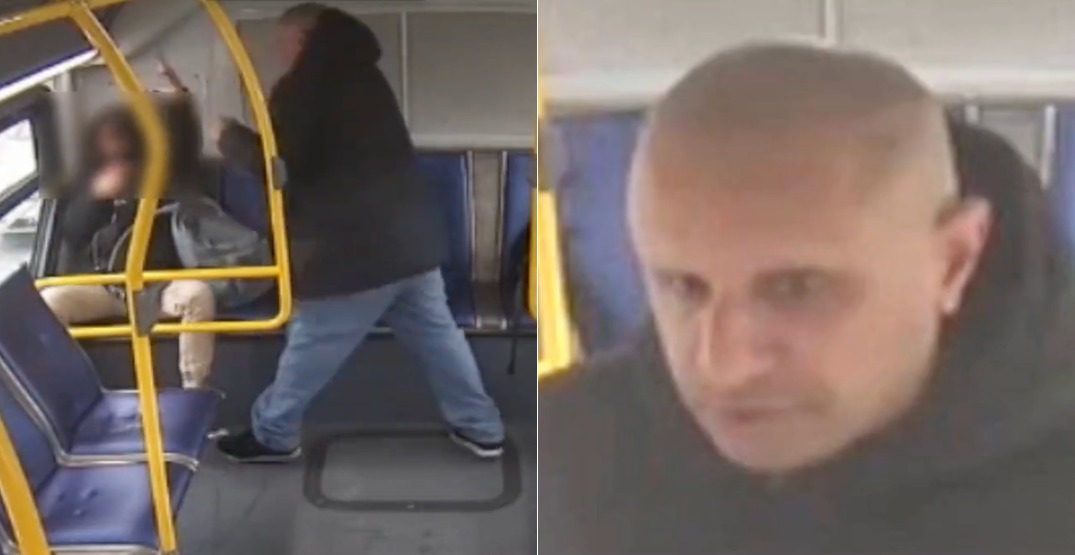 Metro Vancouver Transit Police made an arrest just days after releasing video of a man apparently assaulting a teenager on a bus in Surrey in April.

The suspect in the unprovoked assault of a 17-year-old girl on board a @TransLink bus has been identified and arrested. @TransitPolice appreciate all of the tips received by the public, which led to a quick arrest by investigators. #community #teamwork #thepowerofsocialmedia pic.twitter.com/uQz39QX7d6

The incident happened on a TransLink bus on April 1 and was reported by the victim after she got home.

Police didn’t publicly share footage of the assault until May 5, but they arrested a suspect just days later. Charges have not been announced against him.

“Transit Police appreciate all of the tips received by the public, which led to a quick arrest by investigators,” they tweeted on May 7.

The video footage appears to show a man behaving “erratically” before striking several blows on a 17-year-old victim.

#MVTPMediaRelease: @TransitPolice are asking for the public’s assistance in identifying a suspect who allegedly attacked a 17-year-old girl on board a @TransLink bus.
**WARNING: this video contains images of violence**https://t.co/HMTLOSc7Vq pic.twitter.com/r6Swx3mHoG

She was sitting quietly when it looks like he punched her in the head multiple times — so hard her glasses flew off her face, according to a police statement.

“Despite the teen’s attempts to defend herself, when she bent over to pick up her glasses, the suspect allegedly used his knee to strike her in the head,” it says.

He also apparently blocked her from leaving her seat, which was in the back corner, before exiting the bus.

Prior to making the arrest, Vancouver Police had described the suspect in the video as a bald South Asian man in his 30s or 40s with a medium build, standing approximately 5’8″. He was wearing a long black winter jacket, light blue jeans, and black running shoes with velcro closures.

For more details, you can follow Metro Vancouver Transit Police.