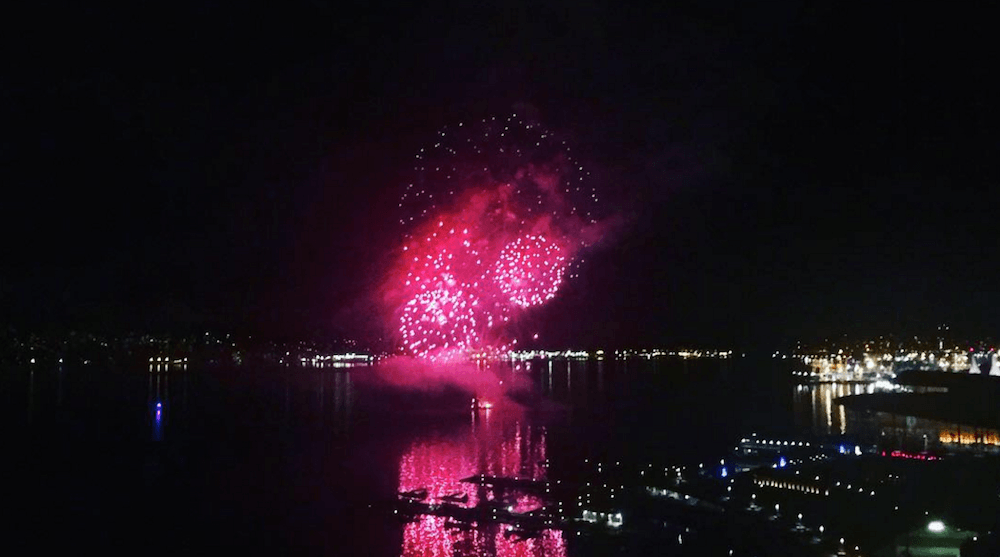 If you heard explosions that sounded like fireworks, you weren’t mistaken. A number of Vancouverites were treated to a private fireworks show early this evening in downtown Vancouver.

The high-aerial fireworks display began just before 9:50 pm and were fired from a barge towed to the waters in front of the Vancouver Convention Centre in Burrard Inlet.

It’s unclear who exactly was responsible for tonight’s show, but such shows in Coal Harbour are usually staged by larger events and exhibitions happening at the Vancouver Convention Centre.

These events work with a local event production company and are required to acquire permissions from the City of Vancouver, Port Metro Vancouver, and the convention centre. They are not publicly announced beforehand to ensure that large crowds do not form and police and clean-up costs are kept to a bare minimum.

…that time when a seemingly spontaneous fireworks show breaks out at the edge of your neighborhood!! 🤗🎉 #SummerFun #ItAintOverYet #VanCity #WhatsGoingOnOutThere? #celebration #ScienceWorld #Vancouver #MountPleasant

That time someone bought fireworks in Vancouver instead of helping refugees, aids patients or cancer…. #burningmoney #cancer #vancouver #priorities #pullyourheadoutofyourass

That was random for a Tuesday…. #fireworks #vancouver

Why are there firewooooorks #vancouver #fireworks #yvr

fireworks in vancouver…why?
I research tweet and everyone don’t know why.Maybe it is doing random in vancouver🎆 pic.twitter.com/RyqabZuQsz

Um… what magical occasion is causing all the fireworks in Vancouver? Someone really likes Tuesdays? #YVR

Vancouver leads the league in fireworks for no reason.

Question #Vancouver are there mad fireworks happening and if so what’s the occasion ? These sounds are alarming! #confused

One of the main reasons I use Twitter: to figure out of its fireworks I’m hearing in #vancouver or if I’m crazy.

What’s with the fireworks that were just happening in downtown #Vancouver? What’s the occasion?

Thought #Vancouver was under attack, then went outside and saw pretty colours in the sky. #fireworks #random