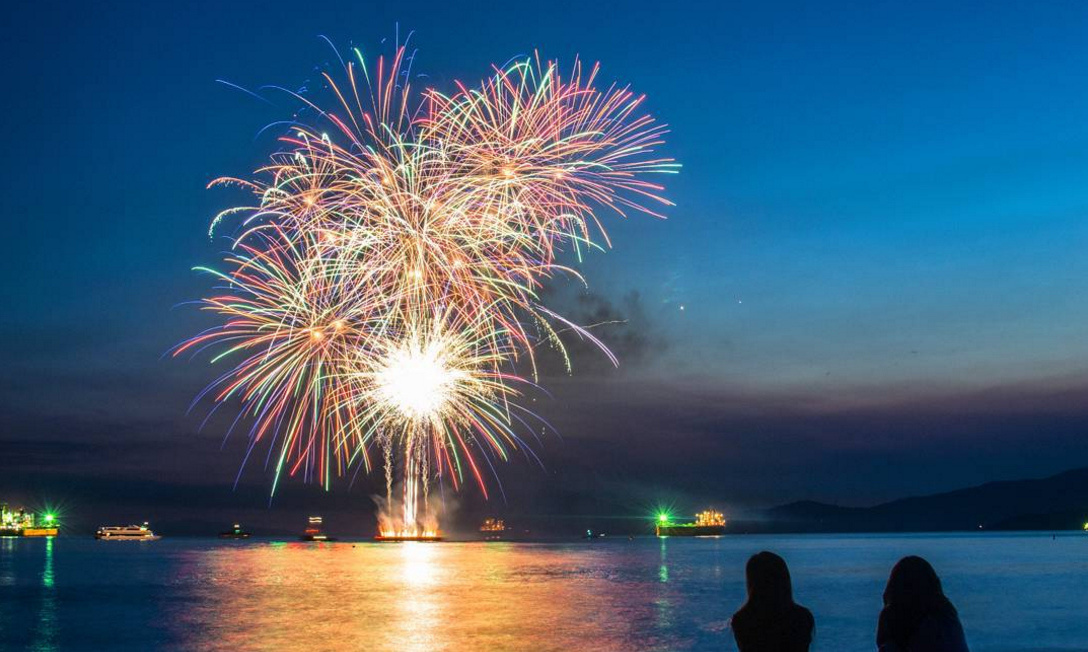 It is no secret that Vancouver is a big fireworks city. Ever year, the skies over the downtown Vancouver peninsula are predictably lit up for Canada Day, Celebration of Light and, as of last year, the new annual New Year’s Eve fireworks celebration. Then there are the spontaneous private fireworks displays, which are usually launched from a barge.

More than a decade ago, Princess Cruises christened its then-new Island Princess vessel at Canada Place with a large fireworks display over Coal Harbour. In 2014, remarkably, there were two back-to-back fireworks displays just days after Canada Day celebrations: A private group on a yacht celebrated the Fourth of July, American Independence Day, with a fireworks show from a barge just west of Stanley Park, and nearly 24 hours later in Coal Harbour, just north of the Vancouver Convention Centre, there was another fireworks display for the high-profile wedding of Michelle Tam and Joseph Fung, the son of Chinese media and development mogul Thomas Fung who owns the Fairchild Group.

While these surprise fireworks normally come as a pleasant surprise, the show on April 25, 2015 was rather unintentionally cruel. A conference at the convention centre ended its event with a large fireworks display on the water, just minutes after the final buzzer went off in the last Vancouver Canucks game of the season. The Canucks had just been eliminated from the first round of the 2015 Stanley Cup Playoffs, losing Game 6 to the Calgary Flames with a score of 7-4.

The latest surprise fireworks display was on May 18 from a barge in Coal Harbour for a conference at the convention centre. On average, there are two or three private displays for events held at the convention centre, according to David Clark, the President of B.C. Event Management – the company responsible for organizing most of these surprise shows.

“They are part of the local convention industry,” Clark told Daily Hive. “We are one of the few convention centres in the world where you can do a fireworks show to top off a convention, usually after a finishing gala. Only the bigger conventions are going to be able to afford it, and we don’t want to do too many. We won’t do it for any event that asks for them.”

To be able to stage these private displays, organizers need to seek high-level approvals from the convention centre, Port of Vancouver, and the City of Vancouver.

“There’s many stakeholders so it’s not an automatic for anyone that wants them,” said Clark. “Everyone has to be on board. We do them for big conventions.”

But contrary to popular myth, these fireworks displays do not cost millions or even hundreds of thousands of dollars – such private displays can be accomplished with a budget of tens of thousands of dollars. This accounts for all costs such as the fireworks products, design process, pyrotechnicians, renting the barge and the port ramp to load the fireworks, getting tugboats to tow the barge into the firing position, and marine policing costs – paying for the Vancouver Police’s Harbour Master Patrol Boat to keep all vessels in the safety zone away from the barge.

I had the opportunity to work with Clark in 2012 when I was the CEO of the Harvard World Model United Nations (WorldMUN), an annual, traveling university-level Model United Nations conference held at the Vancouver Convention Centre that attracted over 2,000 students from hundreds of post-secondary institutions in over 60 countries. We ended the conference’s Closing Ceremony at the West Building with a literal bang – with the lighting of the Olympic Cauldron and a fireworks display launched from Jack Poole Plaza. While we did not use large shells that require a barge and a wide-diametre buffer exclusion zone, the extensive use of consumer-grade fireworks still provided a spectacular show.

However, the ability to stage this more affordable fireworks option from the plaza is no longer available. Back then, there were no restaurants framing the plaza; Cactus Club Cafe did not open for another year, and Tap & Barrel opened after in August 2013. Both restaurants have large canopy-covered patio spaces that take up much of the plaza’s footprint, space that was used as a buffer zone for WorldMUN’s plaza-based show.

“Your plaza-based event was one of the cheapest shows I’ve ever done, and we got very creative to do it from the plaza,” he said. “I haven’t had a customer like you since, but I’ve spoken to the convention centre and they said it would be much more challenging because of the new patios. The chances are no.”

As for why these shows are kept a secret until just before the scheduled start time, it has to do with keeping policing, security, and traffic control costs extremely low. Compared to the public events, these private shows cost relatively low as organizers are only paying for the hard costs of such displays. If policing costs were to be added, the cost could easily escalate into the six figures – the same type of costs that Canada Day at Canada Place, New Year’s Eve Vancouver, and Celebration of Light organizers incur.

These private shows would not be permitted if word got out early and attracted hundreds of thousands of people into the downtown core.

“We do that on purpose because we don’t want to attract a crowd which could then block the streets, and police would have to come out and do traffic control. Then there’d be a big police bill. These are private shows for the people at the convention. We can’t be blocking streets with crowds of people. If they are publicized, they would cost much more than they do now.”

Heads up – There will be a 15 minute private fireworks show on a floating barge near the #Vancouver Convention Centre beginning at 8:50pm

Heads up – There will be a 10 minute private fireworks show near the Vancouver Convention Centre over Burrard Harbour beginning at 9:30 pm.

The only official public word of warning about the surprise displays are through the City of Vancouver’s Twitter account. A tweet is sent out one or two hours before the firing time, and the convention centre posts notices of the shows at condo towers located within the immediate vicinity. This warning gives pet owners in the area some time to prepare their pets in advance to cope with the noise.

If you happen to be walking along the Vancouver Convention Centre’s seawall just after sunset and you notice a small barge being towed by tugboats and police boats with blue flashing lights a few hundred metres from the shoreline, that is another indicator of an impending fireworks show.

Another surprise fireworks show in Coal Harbour! Luckily I was in the area #Vancouver

Cool, but why? #fireworks #vancouver #justcause

Why is there a fireworks show in Vancouver right now? pic.twitter.com/gvLVKkFgow

Gorgeous #fireworks @VanConventions in #Vancouver tonight. A private event apparently. A treat for the rest of us! pic.twitter.com/22VMqlcyl2