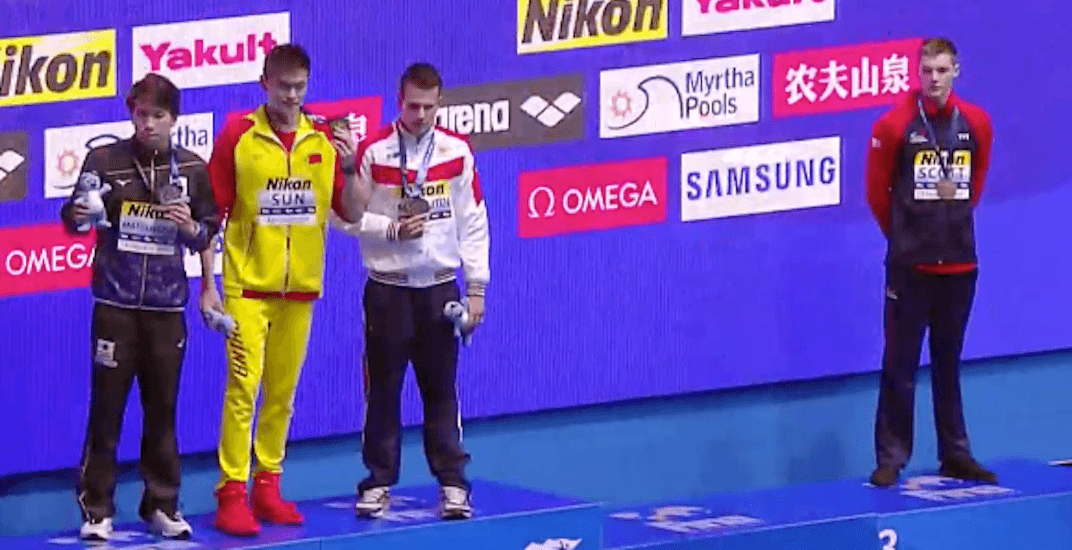 A pair of swimmers have protested Chinese swimmer Sun Yang at the 2019 FINA World Aquatics Championships in Gwangju, South Korea.

Sun has won two gold medals at the Worlds so far, and on both occasions, another medallist refused to join him on the podium for the customary celebratory photograph.

The first incident came during Sunday’s men’s 400-metre freestyle final, when Australian silver medallist Mack Horton stood behind the podium out of protest.

Mack has called Sun a “drug cheat” and was unhappy he was allowed to compete.

Sun was banned for three months by FINA in 2014 after testing positive for Trimetazidine, a banned substance. The Chinese swimmer is currently facing a potential lifetime ban, as he’s accused of smashing vials of his blood with a hammer during a doping test last year.

“This is going to continue to brew over the next 12 months.”

Tensions were high on the men’s 400m free podium, Australian Mack Horton refused to stand next to Chinese swimmer Sun Yang who's facing allegations of doping rule violations that could result in a #Tokyo2020 ban pic.twitter.com/9QN1VfUln7

DRAMA ON THE PODIUM | Great Britain's Duncan Scott follows Australia's Mack Horton in refusing to share the podium with China's Sun Yang, who is facing a doping investigation.

Scott purposefully stood away from the other three men on the podium, refusing to appear in the celebratory photo. Sun confronted Scott afterwards, with cameras catching him say “you lose, I win” to the British swimmer.