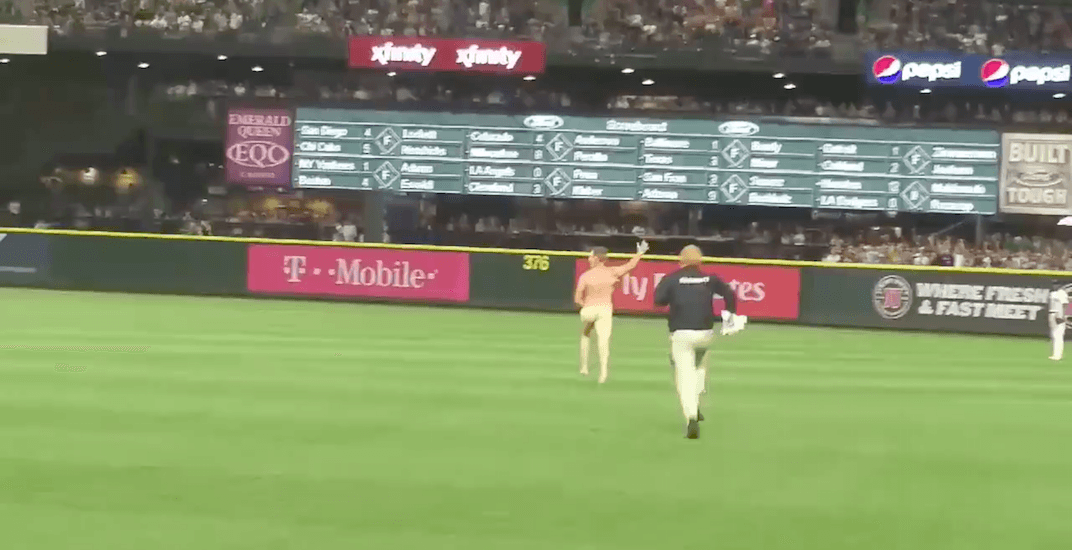 A cheeky Canadian resident likely got more than he bargained for after running wild and free during a Major League Baseball game on Saturday.

One of the many fans that traveled south for the Blue Jays’ annual series in Seattle, David McClearn ran onto the field of play, leaving his clothes behind to win a reported $80 bet with friends.

He got a loud cheer from fans before being tackled by security and ushered off the field. That’s when the fun ended.

McClearn was arrested for trespassing an indecent exposure, spending the night in jail before posting bail on Sunday. A resident of Vancouver, he’s originally from Ireland and isn’t a Canadian citizen. That means that repercussions could be more serious for him, with deportation back to Ireland a possibility.

He is scheduled to appear in Seattle Municipal Court on Wednesday.

“Our office has elected to file the misdemeanour charge of ‘criminal trespass’ against Mr. McClearn, declining to file the other referred charge of ‘indecent exposure,’” a Seattle City Attorney’s Office spokesman said.

A GoFundMe campaign has been set up for McClearn by his friend.

“I’m helping my friend get out of jail for streaking a baseball game. I bet him $80 to do it lol,” the page says.

The fundraising effort hasn’t been going great, with just $35 of the $4,000 goal having been raised so far.