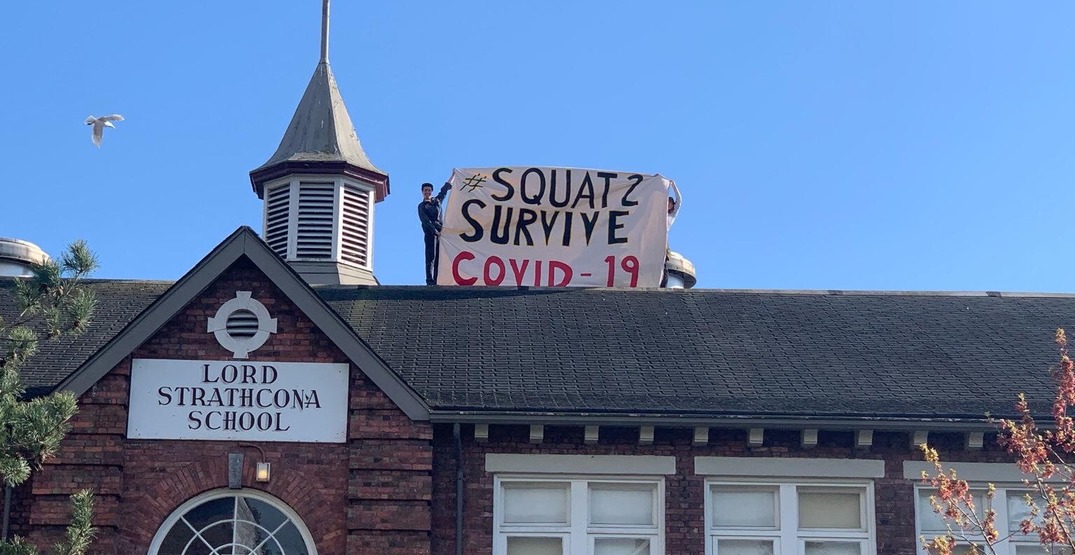 Police arrested more than a dozen protesters who who took over a downtown Vancouver school as part of a homeless rights protest this weekend.

Vancouver Police Department officers took 14 people into custody who broke into a vacant building at Lord Strathcona Elementary School as part of the #SQUAT2SURVIVE demonstration occupying the space.

“This was a dynamic call and a prolonged, overnight situation for police,” Sergeant Aaron Roed, VPD, said in a press release. “Police were met with hostile and combative suspects inside the school who, at one point, threw wooden pallets and other large pieces of wood at officers.”

The #SQUAT2SURVIVE movement encourages impoverished and homeless people to occupy vacant buildings as a means to “assert their right to seek safety, security, and shelter from a deadly pandemic, and pressure the government to release the resources necessary for those most vulnerable to COVID-19,” according to the initiative’s GoFundMe page.

This squat was named after Vancouver Mayor Kennedy Stewart because his “inaction and incompetence has cleared the way for COVID-19 to spread throughout low-income communities.”

In a statement issued on Sunday, Mayor Stewart explained that his number one priority has always been to ensure the safety of vulnerable people, particularly those who are homeless or under-housed.

“Vulnerable residents, especially our neighbours in the Downtown Eastside, are rightfully feeling anxious for their safety,” Stewart said.

“It’s clear from this action, and the hundreds of conversations I have had with people who work in the Downtown Eastside, that more information is needed about how under-housed and homeless residents can find the shelter they need to stay safe from COVID-19.”

As such, Mayor Stewart has called on Minister Shane Simpson — the lead of the cross-ministry team responsible for the public health response of the Downtown Eastside — to outline his plan for the hundreds of available spaces in hotels and other shelter beds BC Housing has already secured.

The #SQUAT2SURVIVE Vancouver GoFundMe was founded by Duncan Chan, a member of the Red Braid Alliance, a working-class and Indigenous organization that advocates for “strategic unity between Indigenous peoples fighting for sovereignty through dismantling colonialism.”

Daily Hive has reached out to Chan for comment, but has not yet heard back.

BREAKING: Homeless & underhoused residents of Vancouver’s DTES take over a vacant school building, launching the #StewartSquat. Squatters say they have no other options to stay safe from #COVID19, call on others to help defend the squat so more can join. https://t.co/WW7xZOeH2y pic.twitter.com/w4PVNh08y1

Lord Strathcona Elementary School is one of many facilities that participate in a program to provide lunches to eligible students and families who rely on this service, particularly in difficult times such as these.

With the ongoing squat, some residents are concerned that it will impact the availability of the meal program.

However, the Vancouver School Board told Daily Hive the lunches will be provided as usual.

“There was an incident at Lord Strathcona yesterday that the VPD investigated,” VSB representative said in an email.

“Following their investigation, the lunch program is expected to be unaffected by matters that took place yesterday.”

Chan’s first COVID-19 squatting protest took place on April 1 at the publicly-owned and currently vacant North Surrey Recreation Ventre in Surrey, and was declared the “Hothouse Squat.” This is the movement’s second squat in Vancouver. 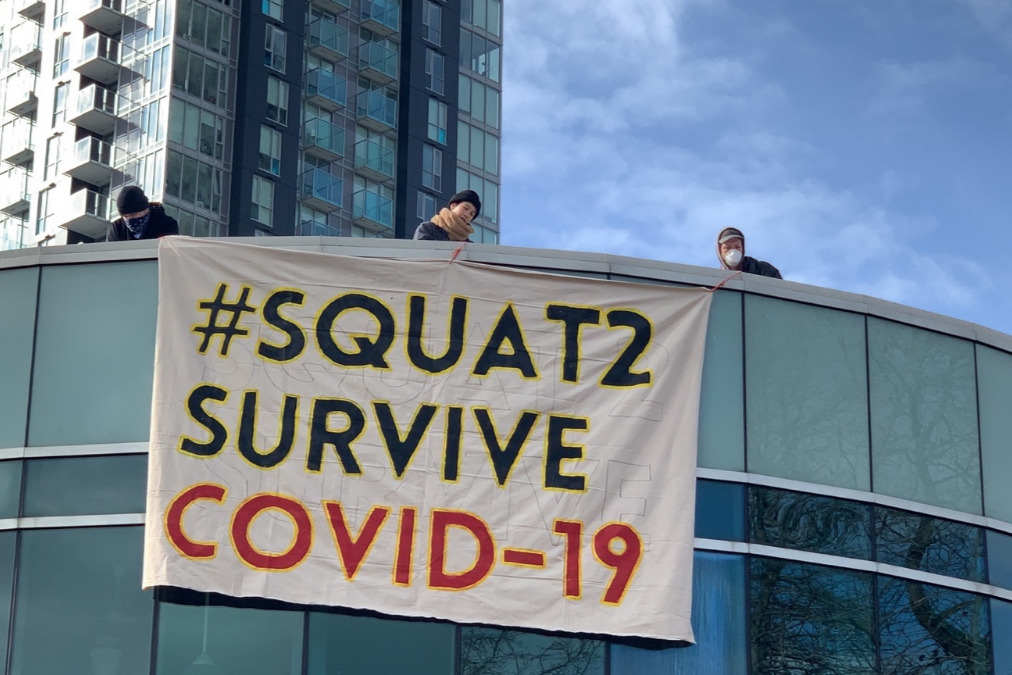 The GoFundMe page describes the act of squatting as a form of self-defence for communities that are most vulnerable to the coronavirus pandemic. These groups include those sleeping on the street or in shelters, as well as those living in single room occupancy (SROs) and modular housing, where physical distancing and self-isolation are not realistic options.

“The government isn’t doing anything to help the people, so the people have to help themselves,” organizer Flora Munro, a member of the Misipawiatik Cree Nation, said in a press release from the Vancouver Area Network of Drug Users (VANDU).

Munro continues that the current quarantine measures being executed in Vancouver pose a higher risk to the lives of active drug users, as well.

“The government is telling people to stay alone inside. That means there is no one to help us if we overdose,” she explains.

The GoFundMe page continues that participants in the #SQUAT2SURVIVE movement believe that dismantling their squats and forcing people back into various alleys, shelters, and modular housing is a violation of their Section 7 Charter right to security of the person.

They state this because these areas present an “increased risk of dying from COVID-19.”

At this time, the #SQUAT2SURVIVE GoFundMe is seeking $5,000 to fund the purchase of hygiene supplies, including soap, hand sanitizer, disinfectant, and masks.

The money would also go towards food, supplies and equipment for cooking, sleeping gear and tents, as well as legal support “if necessary” for squats associated with the “broader SQUAT2SURVIVE movement.”

The full list of desired supplies can be found here.

“This was a long, complex call and a dangerous situation,” Sergeant Roed stated.

“It required planning and extensive resources during an already busy evening for the police. We’re thankful that no police officers or suspects were injured despite the aggression and violent behaviour of the suspects inside the school.”

VPD will be pursuing charges against those arrested.