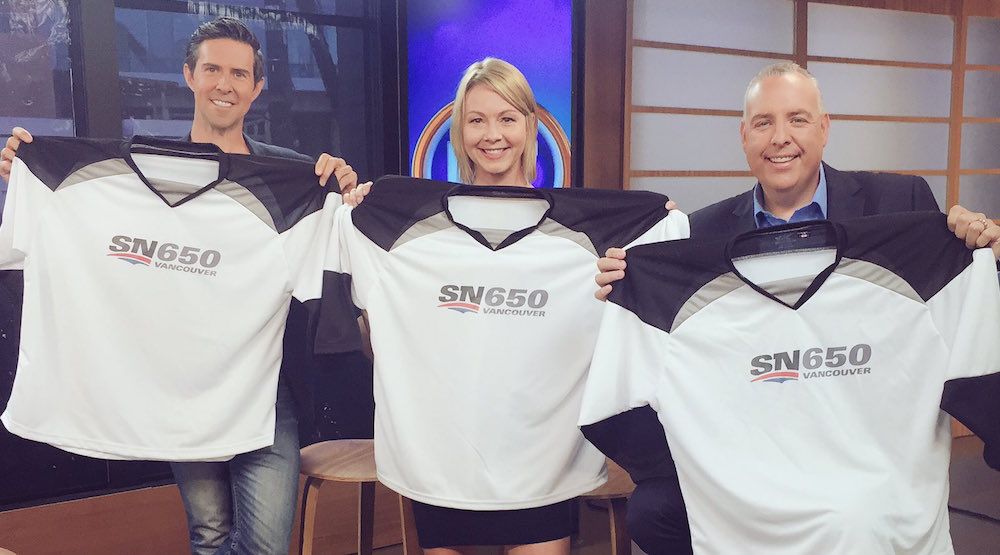 Less than two months before Vancouver’s newest all-sports radio station hits the air for the first time, Sportsnet 650 has begun to reveal who we’ll be listening to.

There are some surprising names.

“James, Steve and Mira are a dynamic trio with a tremendous amount of experience and sports knowledge that will be invaluable to Sportsnet 650, the morning show and, most importantly, sports fans in Vancouver,” Sportsnet 650 program director Craig MacEwen said in a media release. “These three talents are not only excellent at what they do, but they are also exemplary members of the community, giving back through various charitable efforts. We are thrilled to have them on the Sportsnet 650 team.”

The hiring of Darling will come as a surprise to most sports fans. Well known in the city as a news anchor, he was a candidate for the BC Liberals in the most recent provincial election. Prior to that, he was Global TV for 18 years.

Most will remember Darling for his work in news, but he has experience in sports too. He first joined Global BC as a sports anchor, and was a producer for Tony Gallagher’s sports radio show before then.

“It’s exciting,” Darling said over the phone in an interview with Daily Hive. “It’s going to be a lot of fun getting back into one of my passions.”

But sports fans are demanding. Bro Jake was criticized heavily by fans when TSN 1040 (then Team 1040) brought him on to host their morning show. There was considerable backlash from Canucks fans on Twitter Wednesday too.

If Steve Darling self name searches on twitter today… pic.twitter.com/5lQHzfS7I0

But the likeable Darling says his sports knowledge should be the least of anybody’s worry.

“I covered the Stanley Cup, I was in Boston in 2011. I’ve covered all the big (sports) stories in the news department. My sports knowledge is pretty good. I’ve been around the market a very long time and I’ve seen a lot, and I’ve covered a lot.”

“I feel confident. I think when people listen for the first time, they’ll get it.”

“I had a number of different opportunities and I turned down a couple of jobs that I didn’t think were quite right for me.”

While the exact extent of his role are currently undefined, Darling said he will get opportunities on the television side of things also. Sportsnet currently holds the rights to the Vancouver Canucks, both on television and radio.

“I will be doing some stuff with the Canucks, in between periods and stuff like that. I’m also a good reporter, so I told them I want to do some reporting as well.”

“It’ll figure itself out as it goes, and that’s the way this industry works. Nobody does one job anymore, everyone does a multitude of jobs.”

Cybulski is the least surprising hire of the three. He comes to Sportsnet 650 from News 1130, a Rogers-owned company. A longtime Vancouver sports broadcaster, local sports fans are familiar with his work on The Score, TSN, and Sportsnet. The funny/quirky broadcaster was most recently involved in sports with the now-defunct Sportsnet Pacific broadcast with Caroline Cameron out of Vancouver.

Mira Laurence is a less familiar name to Vancouver sports fans, as she makes the move to the Lower Mainland from Vancouver Island. She was the head of the sports department of CTV Vancouver Island for 10 years.

The show will air Monday to Friday, from 6 to 10 am, going head-to-head with TSN 1040’s current morning show time slot.

Are we in for a Vancouver sports radio war?

It remains to be seen if the market can sustain two all-sports stations. It’s been over 10 years since Vancouver had competition in sports radio, and there’s likely only room for one station long term.

Darling disagreed with this assertion though.

“We’re going to be a little bit different in the morning and more conversational. I think it’s going to have a different vibe to it and that’s what people want.”

“Ultimately it will be up to the listener, but I feel that we have a strong team heading forward and there’ll be more announcements coming in the future. I think there’s room for everybody in this market.”

Will the show cater to the hardcore sports fan, or be more inclusive to the casual fans?

“I think to be successful in sports radio, you need to do both. I think you have to be able to speak to the diehard sports fans as well, which obviously we will do. And then also there’s people who are just maybe tuning in who maybe watched me on TV and are wondering what it’s all about. And we want to cater to those people as well. I think there’ll be a mix of everything.”

“It’ll be smart, it’ll be intelligent conversation, it’ll be fun, and people are going to get what they need to kick their mornings off.”