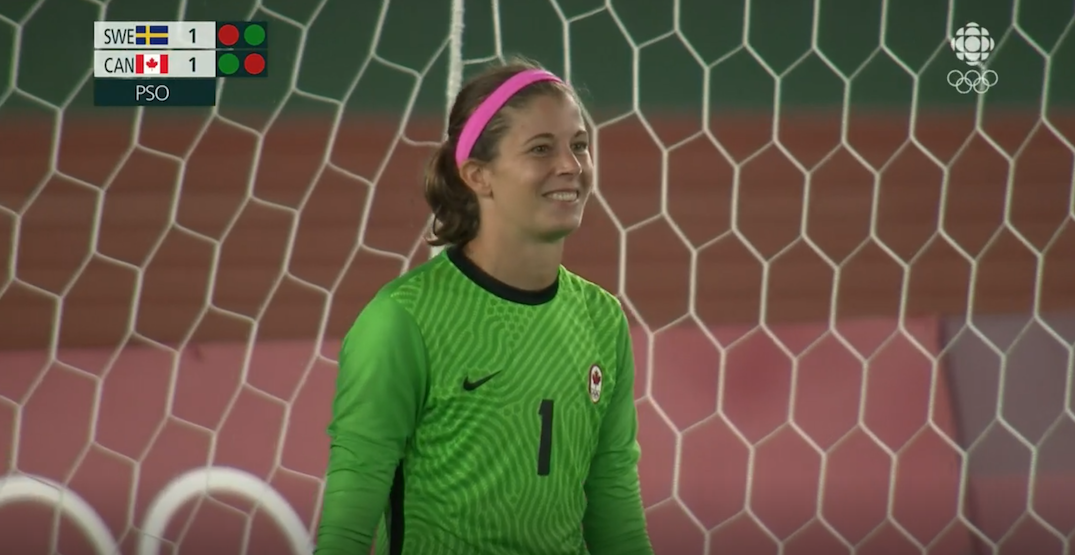 With the weight of the country on her shoulders, Stephanie Labbe was as cool as can be.

And she did it all with a big smile on her face.

Labbe dove to her left to stop Jonna Andersson on Sweden’s sixth shot, setting up Canadian midfielder Julia Grosso for the winning kick.

It’s easy to smile after making a save, but the Edmonton native was seen on the television broadcast flashing a grin in the direction of Team Sweden players prior to their attempts on multiple occasions.

They never had a chance.

It’s not the usual game face you’d probably expect in a pressure-packed moment, but the grinning goalkeeper had reason to be confident.

“There’s no pressure on me; I’m not supposed to make saves,” Labbe told reporters after the game. “And if I can make a save, it’s great. So I go into it just like super calm and relaxed, and just like totally being in the moment and doing everything that I can to just trust myself.”

Fans back home in Canada loved every minute of it.

I aspire to face any pressure in life like Stephanie Labbé does #CANWNT pic.twitter.com/LoGNigm7FW

I too, like Steph Labbé, smile maniacally at people when they’re coming for me 🥰

Stéphanie Labbé will block your kick with a smile on her face. She’s gangsta.

If I was a swede getting ready to take a pk and labbe just smiled at me like this is definitely miss pic.twitter.com/uRIQyZO3Q0

Steph Labbe is a beast. Smiles all the way through PKs, saves 2, wins gold

Labbé's smile throughout all of that was major Sicko stuff.

The smirks and smiles on Steph Labbe's face staring down a penalty. That confidence is FANTASTIC and is exactly what is needed in those moments. Champ behaviour!

Labbe all smiles during the shootout just blows my mind

Going to incorporate @stephlabbe1 Labbe's confident "got this" smile in every high pressure situation I find myself in from now on. #CANWNT

Labbe had an outstanding tournament for Canada, allowing just two goals in five matches, with clean sheets in the quarter-final against Brazil and the semi-final against the United States.

Someone was so impressed with her performance that they updated her Wikipedia page with the position of “National Minister of Defence,” which earned a shoutout from Harjit Sajjan.

This is Labbe’s second Olympic medal, as she led Canada to bronze at Rio 2016.