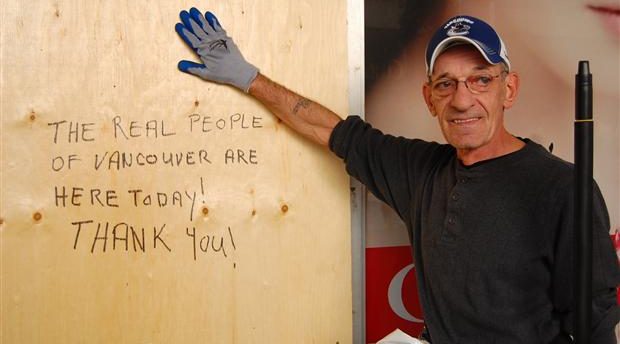 After a record-breaking season, the Vancouver Canucks came up one game short of winning the first Stanley Cup in their 40-year history of the club in 2011.

But the disappointment and sadness from losing the game and series paled in comparison to what happened afterwards.

I was blessed to be at that game; a game that was supposed to be the most memorable moment in the club’s history. It would have been the perfect ending to my first season as a season-ticket holder.

As my friend Mike and I mercilessly booed Tim Thomas, Zdeno Chara, and Gary Bettman, my phone started buzzing with text messages from family and friends. All of them said the same thing: be careful when leaving Rogers Arena.

Here’s a sample of my Facebook status updates from that evening:

June 15 at 7:56pm
A very bitter and disappointing end to an outstanding and memorable season. Proud of the team…thanks for a thrilling ride! 4 months until we do it all again.

June 15 at 9:21pm
Thank you family and friends for your calls, texts, and messages concerned for my safety. So far so good…I made it back to the office…will be leaving to drive home in about half an hour. I am most appreciative of your thoughtfulness, yet embarrassed for what’s happening downtown.

June 15 at 9:35pm
Amazing…with all the attention on the rioting, the Canucks failing to win the Stanley Cup is secondary!

June 15 at 10:42pm
Home sweet home. Thank you so much for your concern…I appreciate all of you. Don’t want to over-dramatize this or make this about me…so please pray for all those still downtown…especially the innocent ones. As for me, I’m going to spend some quality time with my wife and kids.

June 15 at 11:43pm
I’ve been home for an hour and I haven’t watched one hockey highlight or interview…I’m riveted by the news footage of the police and the crowds.

While the riot and unrest made international news, the world didn’t really hear about the clean-up efforts the next morning. I didn’t see CNN, Fox News, or ESPN cover the hundreds of people who came downtown the next morning to sweep, scrub, and pick up litter.

They also didn’t hear about the people who stood up for the city amidst the chaos happening around them the night before. Some of them held back looters while others fought off vandals. Many stood arm in arm as they protected restaurants, shops, and churches.

I remember arriving to work earlier than usual on June 16 – I probably didn’t get a lot of sleep the night before. Before even making it into my building, I stopped to help Ringo – our maintenance guy – clean up the sidewalk and walkways surrounding our building at Cambie and Robson.

There were bottles. T-shirts. Paper. Food scraps. And a Canucks playoff towel or two.

I know that a similar scene was taking place in multiple locations throughout the downtown core. Many of the clean-up volunteers didn’t even work or go to school downtown… But they made their way there to do what they could to help.

I reference June 15 and 16 a lot in my work with young people. I tie it into the importance of good decision-making, and how the best decisions come from our values.

In their apologies, many rioters said that they were overcome by adrenaline and the heat of the moment and fuelled by the push for instant gratification and power.

I warn young people that we all need to beware the quick fixes in life: those that may give us short-term pleasure or an ego boost. But at what expense?

Thankfully, the Wednesday morning was all about good people.