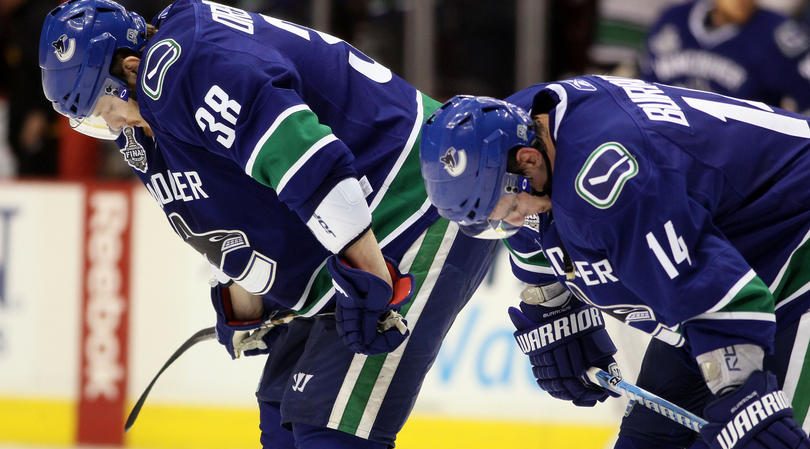 It was one of the darkest days in the history of Vancouver.

June 15, 2011 was not a good day to be a Canucks fan. That was the day Vancouver’s beloved hockey team lost at home in Game 7 of the Stanley Cup Final. It’s also the day the city burned.

We were embarrassed for the city and ashamed of the rioters. But this is not an article about those idiots.

This is about how being a Canucks fan changed that day.

Let me take you back to a better time. A time before June 15, 2011. Canucks fans were proud. They were confident. They were cocky. They were united. It was great.

This was what it was like in the playoffs…

But that all changed on June 15.

You know the story by now, I won’t rehash it.

The Canucks had the shortest offseason in team history and October came quickly.

Roberto Luongo was largely used as a scapegoat by the fanbase at the time. Fans were on him the season after – a season where he posted a very good .919 save percentage. The Canucks had their second-best regular season in their history in 2011-12, putting up 111 points and winning the Presidents’ Trophy for a second straight season.

But 2011-12 was nothing like 2010-11. Instead of a euphoric fanbase enjoying the ride during the regular season, fans were killing time, waiting for the playoffs to start. The Stanley Cup Final hangover was real. It was hard to get excited about the regular season.

Twitter was a battleground where Canucks fans argued with Bruins fans as well as members of the media in the rest of Canada who vilified Vancouver and praised Boston. History has shown that neither team were choir boys.

Daniel Sedin got concussed by Duncan Keith late in the season and the Canucks ran into the eventual Cup winners, the LA Kings, and their postseason run was done in 5 games.

The 2012-13 season was shortened by the lockout. Vancouver’s veterans never seemed to get up to speed, while the team dealt with the Roberto Luongo fiasco which lasted until Cory Schneider was traded at the NHL Draft in June. Except the fiasco didn’t end there of course.

Enter John Tortorella, and the great collapse of 2014. The Canucks were terrible, Ryan Kesler demanded out of town and Luongo was embarrassed in front of more 54,000 people at the Heritage Classic.

Fans began demanding that ownership fire Mike Gillis and eventually they replaced him with Trevor Linden and Jim Benning. Tortorella was gone shortly after, replaced by Willie Desjardins. The team improved greatly on the ice in the new regime’s first year, yet something was still missing.

Canucks fans climbed the mountain with a core group of players, only to be given the boot just steps from the summit.

Five years later, Canucks Nation is still not the same.

While the 1994 Stanley Cup run is looked at fondly in Vancouver, the 2011 run is the opposite. If you weren’t in Vancouver in 2011, you won’t understand. There’s a quiet shame about how it all ended.

Canucks Nation is a divided bunch now. Instead of rallying together against a common enemy (Brad Marchand, Tim Thomas, Mark Recchi, Shawn Thornton, Gary Bettman, etc.) they’re arguing among themselves. Jim Benning will sign a marquee name in free agency and fans will argue about his age and salary. And there’s also still the issue of part of the fanbase wanting the team to tank in the short-term to acquire a better draft pick for the future.

One day this will change, of course. When a new crop of young players become difference makers, hope and excitement will return to Rogers Arena. You can already see a taste of it with players like Bo Horvat and Ben Hutton.

But until then, the dark clouds of 2011 will cast a shadow over the city.