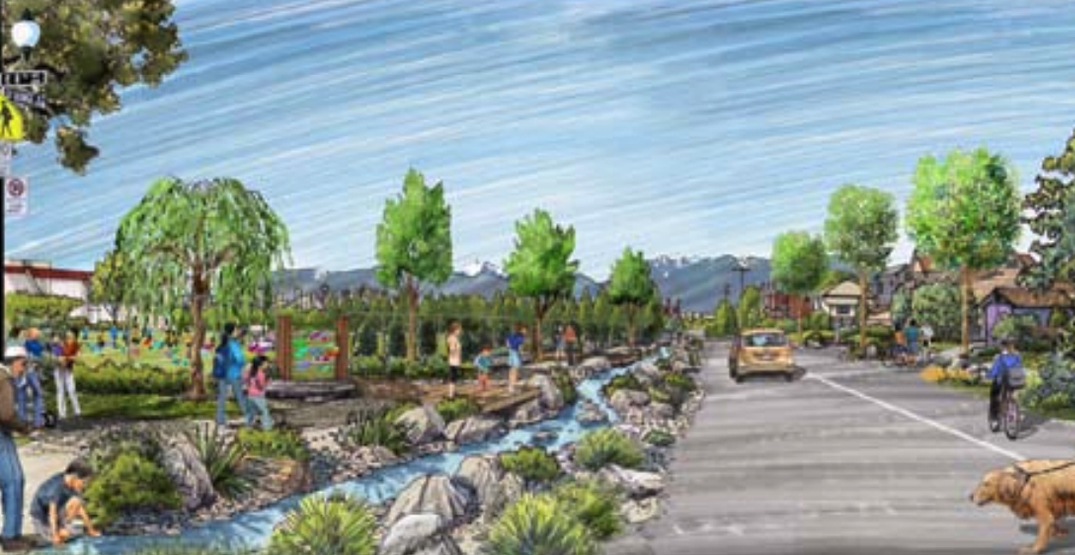 A long-envisioned rainwater feature in East Vancouver is taking its first steps towards being realized, as the project has just entered the City of Vancouver’s public consultation process.

The concept of a “rainway” along St. George Street was first envisioned in 2008 by a grassroots community group dedicated to seeing its implementation, and it was subsequently included in the municipal government’s 2013 Mount Pleasant Plan Implementation Package.

As first proposed by the group, the Mount Pleasant Plan calls for a stormwater feature along St. George Street between Kingsway and Great Northern Way — a length of 10 city blocks or about one km.

There would be a naturalizing of the streetscape and drainage, including the incorporation of wetlands, with the stream fed by rainwater captured in local streets and sidewalks.

For the municipal government’s approach, there will be a combination of rain gardens, bioswales, and rainwater tree branches, effectively mimicking the natural water cycle.

This roughly follows the route of the historic St. George Creek, which was buried underground in the early 1900s to make way for roads and houses. 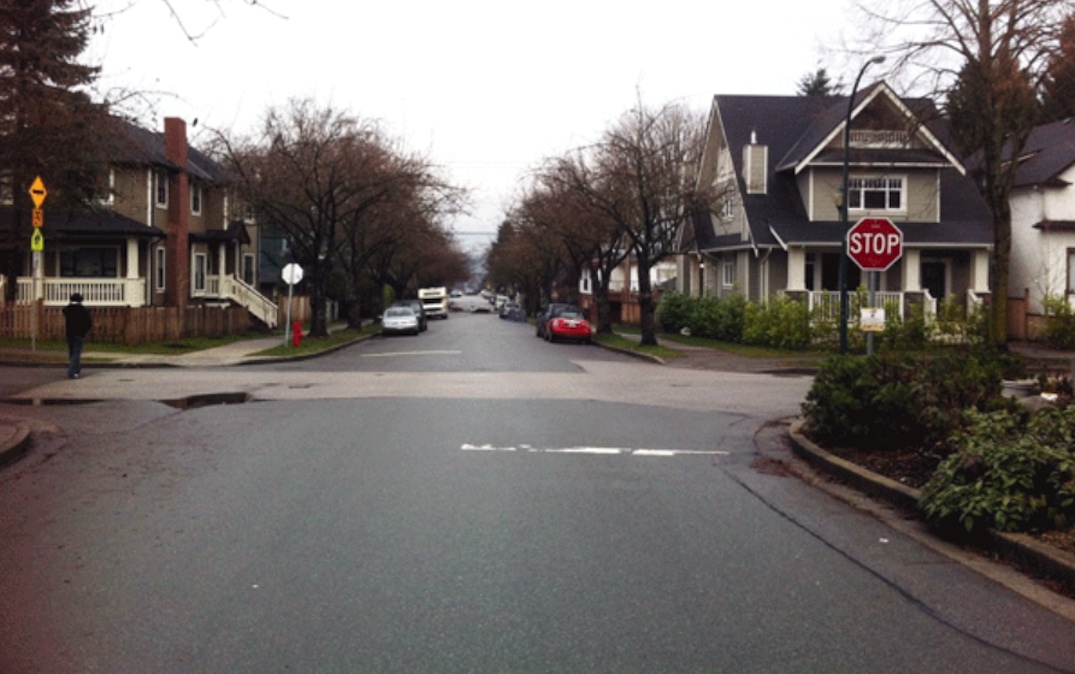 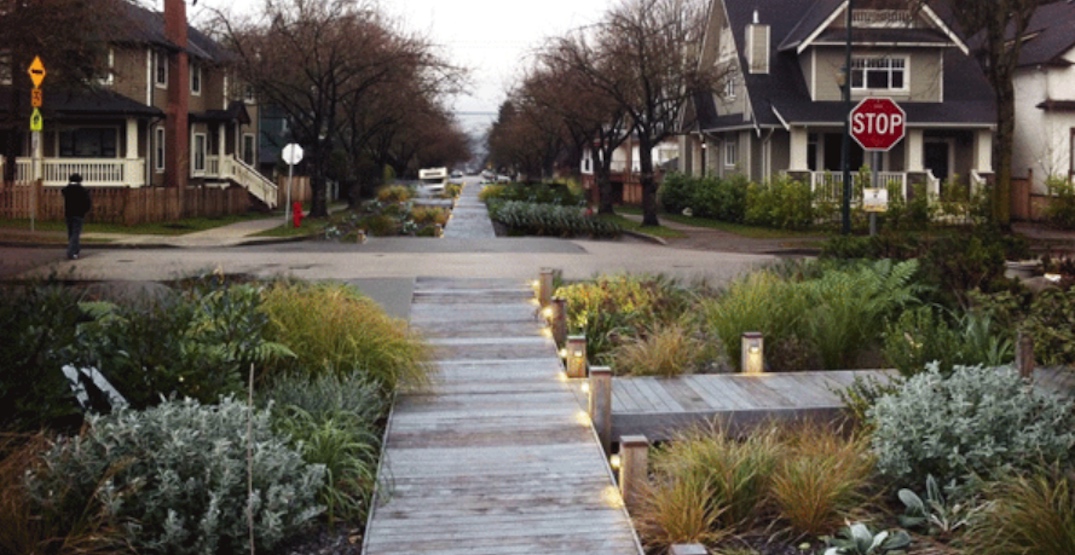 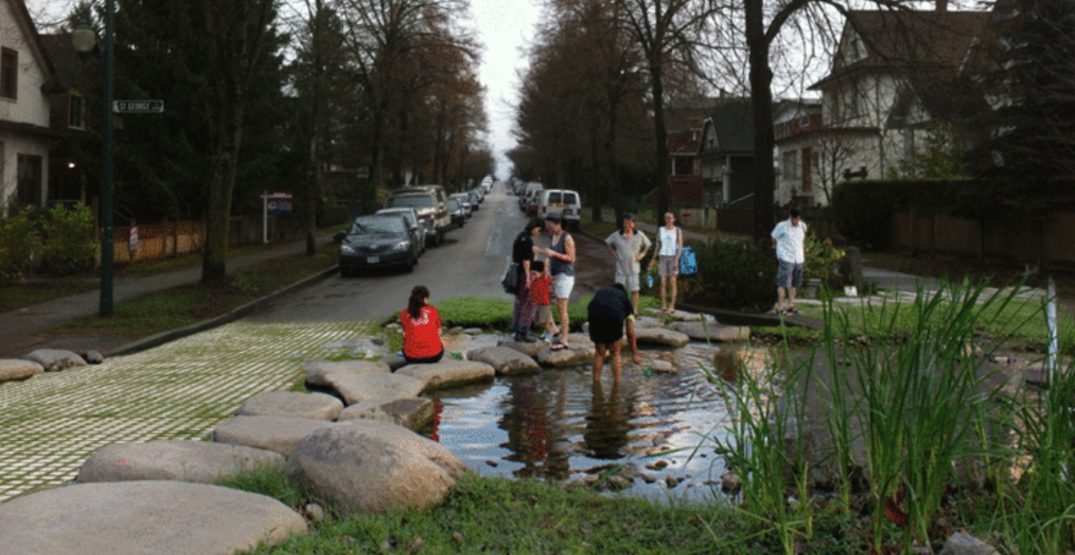 “The development of a Rainway will require some trade-offs. To create space for the Rainway, some road space that is currently used for parking and/or travel will need to be repurposed,” reads the city’s public consultation materials.

“The Rainway has potential to not only provide essential rainwater management services, but also create a unique blue-green corridor that provides enhanced public space, street improvements, and more greenery and biodiversity to the neighbourhood.”

Additionally, enhanced walking and cycling paths will be created along the route.

Currently, the city is planning to proceed with the northernmost half of the Mount Pleasant Plan’s rainway along St. George Street between East Broadway and Great Northern Way, spanning a length of about 500 metres.

For this first stretch of rainway, the timeline is to develop preliminary design options during Winter 2021, identify a preferred design concept in Spring 2021, finalize a detailed design by Fall 2021, and conduct construction between 2022 and 2023.

An online survey for the first half of the project will remain open through early December 2020.

The municipal government is also planning to daylight a historical creek in Kitsilano that once flowed through Tatlow and Volunteer Park.

In May 2019, city council approved a “blueway” concept of interlinked waterways and streams stretching from False Creek to the Fraser River in New Westminster.

Editor’s note: This article has been updated to reflect the differences between the St. George Rainway Project community group’s vision and the City of Vancouver’s proposal.