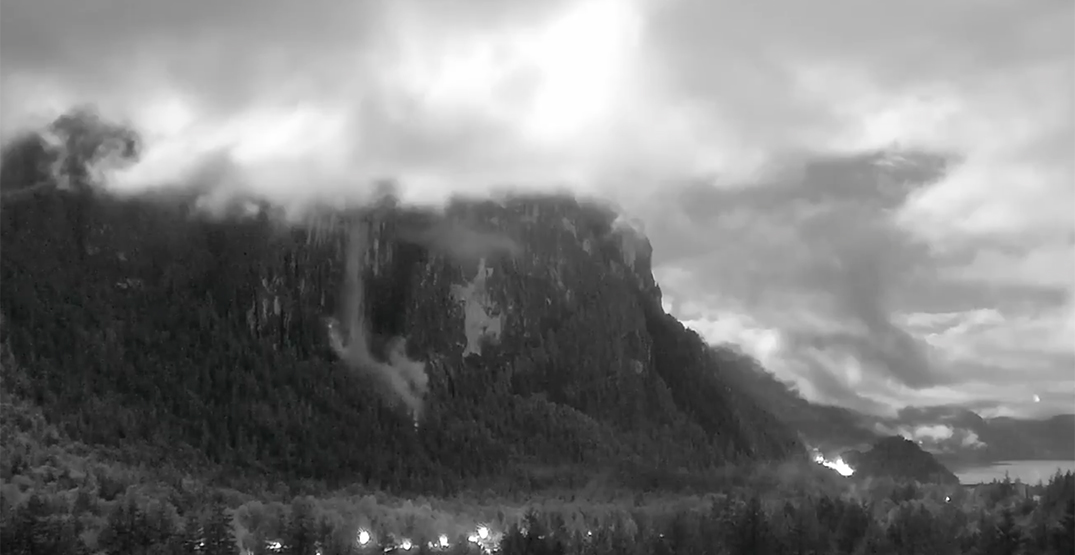 Some residents in Squamish were awoken by a loud rumbling early Monday morning as chunks of rock broke off the Stawamus Chief and fell down the face of the mountain.

A webcam trained on the popular rock climbing destination captured video of the falling rocks that appeared to create sparks as they struck each other. Clouds of dust swirled up from the commotion before the rocks settled somewhere in the forest.

“I think the flashes of light are sparks as the rocks collide on the way down,” Alexis Birkill, who set up the webcam, wrote on Twitter.

A video of last night’s rockfall on the Stawamus Chief, seen from the Stawamus Chief Webcam. I think the flashes of light are sparks as the rocks collide on the way down. #Squamish #SquamishBC #StawamusChief #TheChief @squamishchief pic.twitter.com/CGtywhjvip

Squamish RCMP media relations officer Cpl. Angela Kermer said the fall occurred at about 1:30 am, and several witnesses reported seeing it between the first peak and second peak.

Police, firefighters, and park rangers visited nearby camping and recreation sites and don’t believe anyone was injured in the incident.

Locals in a climbing Facebook group reported hearing the rockfall and several said they thought the sound was thunder. The climbers say the rocks fell from the Zodiac Wall.

This is the latest of several rockfalls that have occurred on the Stawamus Chief this summer, which have resulted in government-mandated closures of climbing areas.