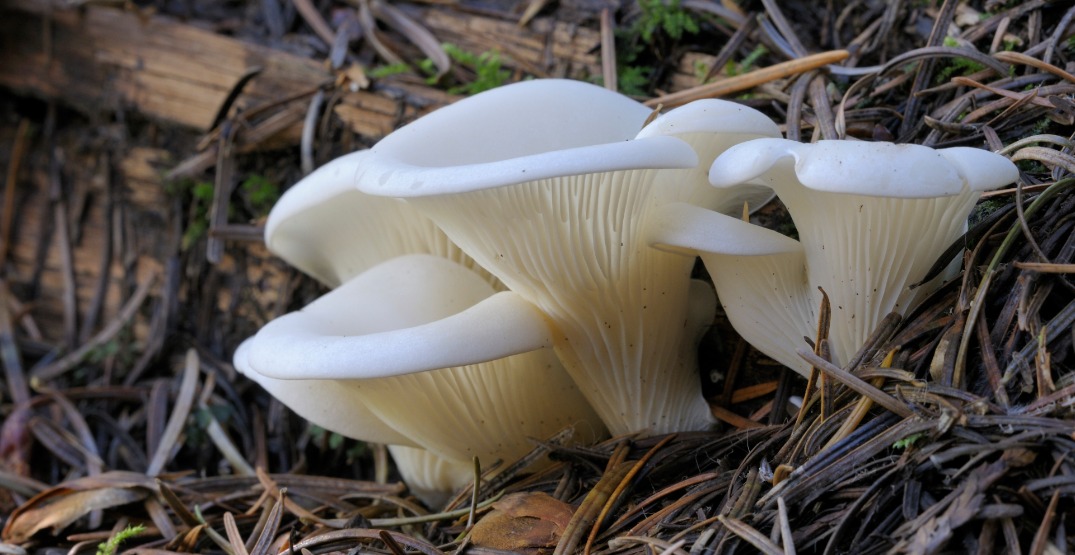 Not all mushrooms are poisonous or psychedelic. In fact, many of the species you can forage in BC parks, forests, and yards can be used for one thing or another, whether it’s medicine, food, or just admiring a cool piece of nature.

BC is abundant in mushrooms, and it’s pretty easy to find them. Just bring identifying apps and books before you go, don’t eat anything that hasn’t been 100% positively identified, and stay aware of your surroundings in the wilderness. It’s better to be safe than sorry.

And remember: wild, edible mushrooms should never be eaten raw. Some are deadly when ingested.

If you do eat something you shouldn’t have and you start to feel sick, call the BC Drug and Poison Information Centre at 1-800-567-8911 immediately.

What to know before you go

According to the Vancouver Mycological Society, mushrooms tend to grow on dead trees, decomposing things, and alongside roads and trails. So keep your eyes on the ground, and make sure you’re looking in all the nooks and crannies.

During spring mushroom season, “the ground is sodden from winter rains and snowmelt and begins to warm, and certain mushrooms grow that won’t appear at any other time,” according to the Vancouver Mycological Society.

“The spring season is characterized by the diversity of large ascomycetes; such as the morels, early morels, false morels, cup fungi and earth tongues. A variety of jelly fungi and certain gilled mushrooms also appear as uniquely spring-fruiting species.”

In the springtime, mushrooms breakthrough nutrient-rich soil under the winter snow to say hello. They need particular soil temperatures to start fruiting, so what you’ll see really depends on what the weather does.

These mushrooms might not be available once it starts warming up in the summer. Dry forest floors mean harsh conditions for mushrooms, so try to go looking before the heat hits.

If you’d like, bring a knife and a bag for foraging.

Never take too much, and be respectful of your environment.

And last but not least: Be sure you’re not breaking the law. Some places are protected, and you can get in big trouble for messing with the biodiversity there.

Ready to start preparing? Last year, the Royal BC Museum released a book called “Mushrooms of British Columbia” by Andy MacKinnon and Kem Luther, which is one good example of a resource to read before you start your search.

And there’s a workshop on spring mushroom foraging from UBC’s farm community on May 5, if you can wait a while to hear from the experts. 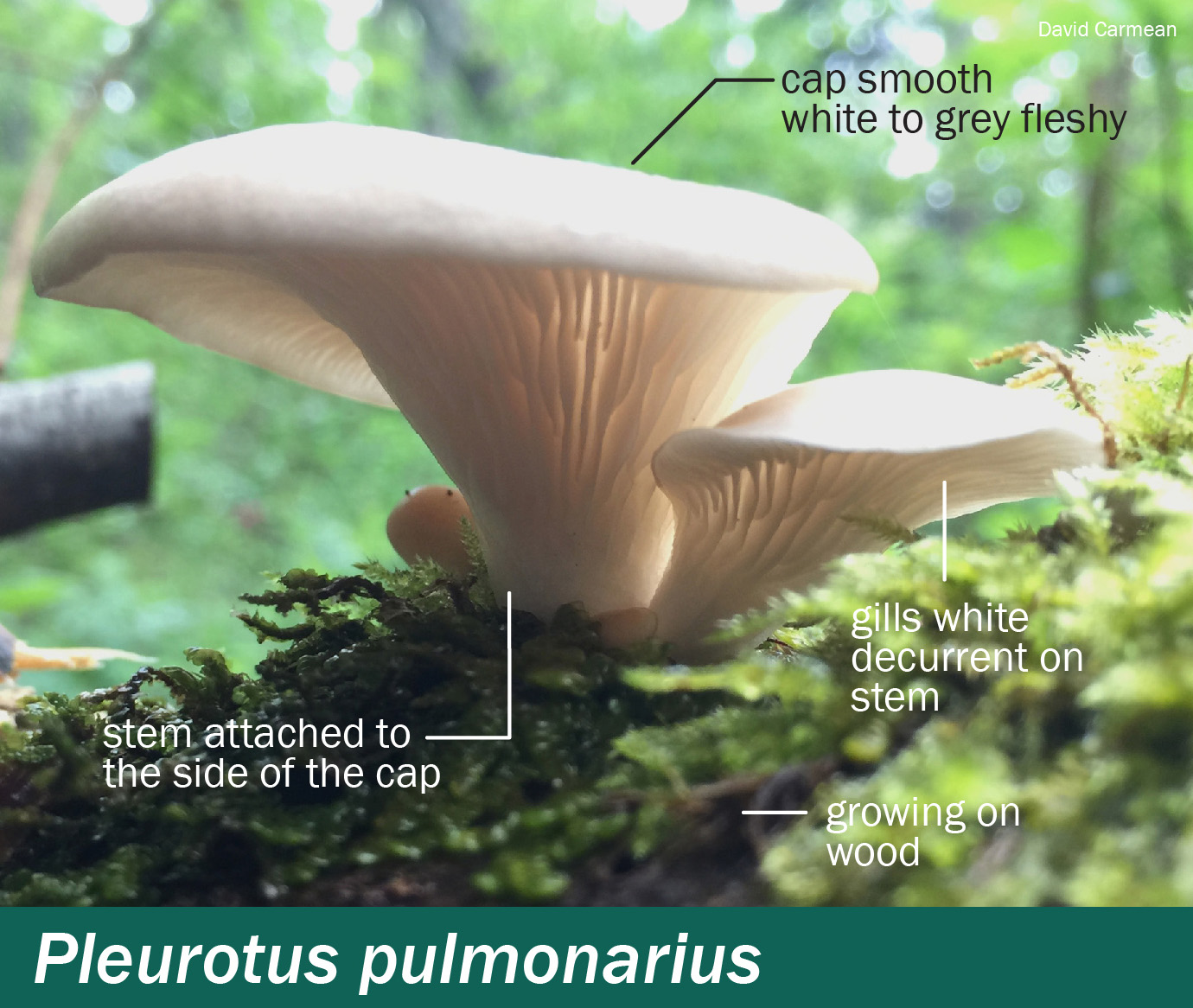 Notoriously delicious and easy to find, oyster mushrooms are also one of the best local picks for cooking. Easy to spot from their fan-shaped caps and pale flesh, these mushrooms grow out of wood. Check stumps deep in the woods or near water — the mossier, the better.

Look for their white gills reaching up the stem and towards the smooth, white or grey cap. They may look like very marginally raised, oval-shaped buttons from above. 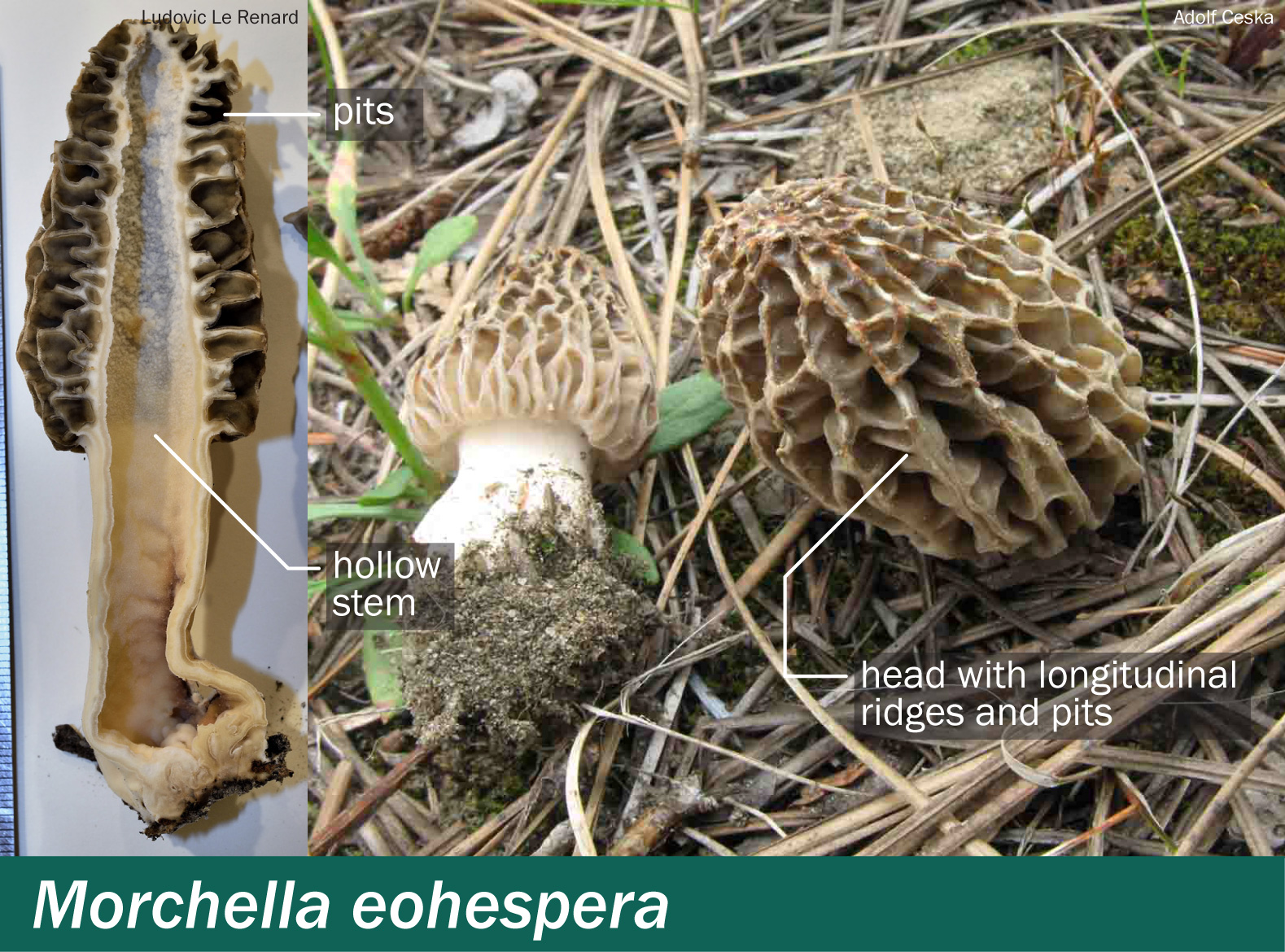 Morels come in all shapes and sizes, and many of them are safe and tasty to eat. According to the Vancouver Mycological Society, “large crops of morels are often produced in burned areas the spring after a forest fire. Because of this, morel pickers follow the fires of the previous year to harvest these choice delicacies which are then dried for future use.” That makes BC prime morel real estate!

The cosmopolitan black morel, also known as Morchella eohespera, is one species you can start looking for. They’re hard to miss, with their cracked, jet-black caps. The Government of Canada’s guide on mushroom harvesting techniques says, “the heads are composed of ridges and pits, [and] the ridges are normally darker in colour, the pits lighter in colour except the white morel.”

“Distinction between species seems unimportant as all species are edible and highly prized. Caution is necessary that the morel species are not confused with the false morels, lookalikes that have caused poisoning in BC,” it says.

Cosmopolitan black morels have a hollowed stem, too. 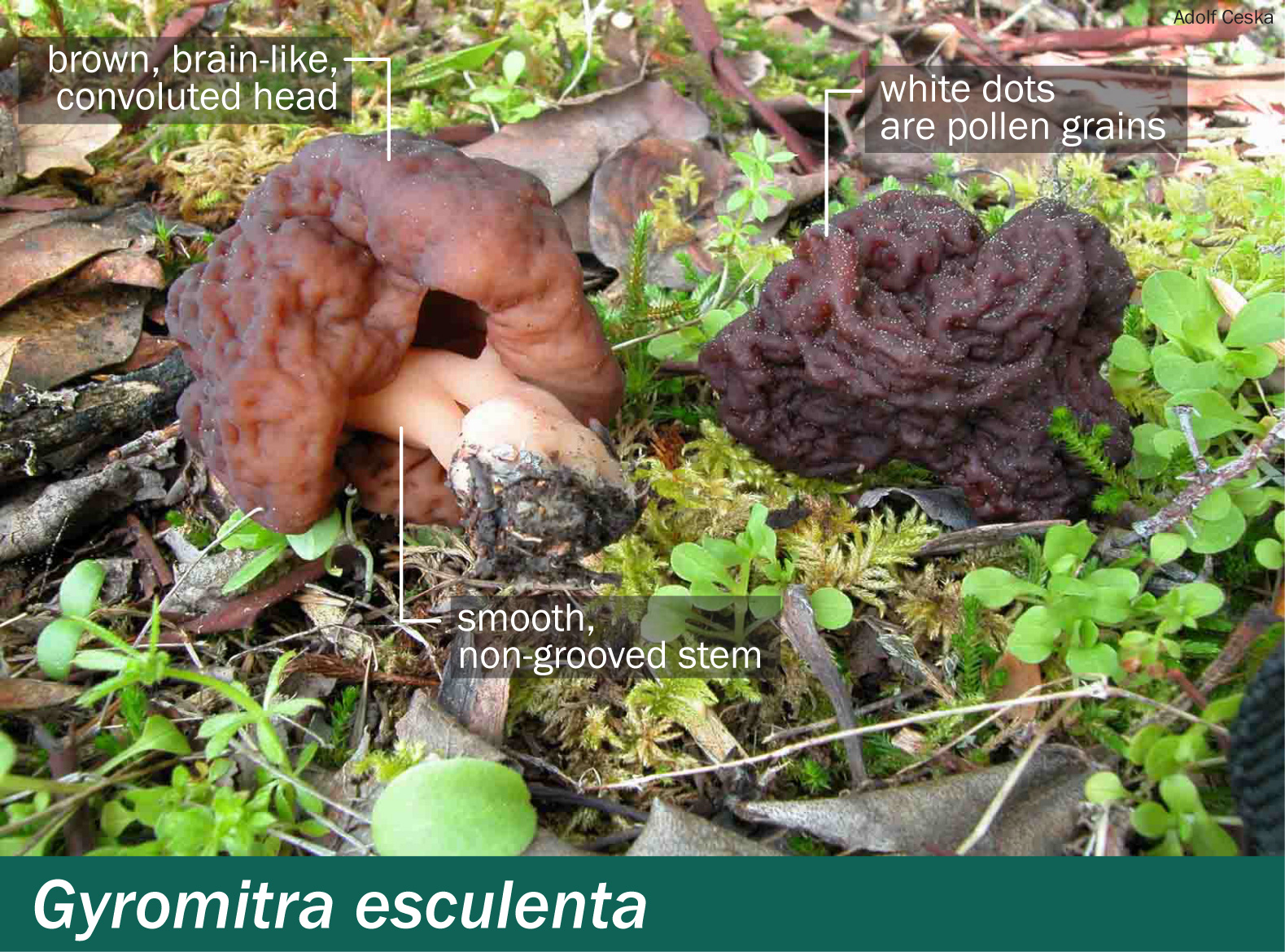 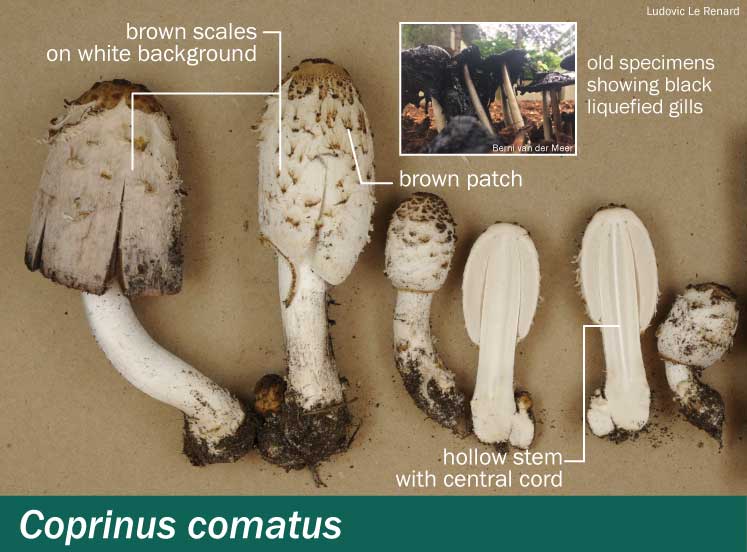 Also called Coprinus comatus, shaggy mane is relatively easy to find in urban areas, but they’re less likely to be contaminated if you pick them from the wilderness. The same goes for most mushrooms, but these have a relatively specific window where they’re prime for picking. Once they start turning black, they dissolve into inedible goo — which you definitely don’t want to eat.

“Harvest young, firm specimens that have not become inky’,” says the Beaty Biodiversity Museum’s website. “Ensure you identify a patch in all stages to confirm ID.”

The delicate texture of this mushroom makes it perfect for cooking into eggs or stir-fries, among other goodies. 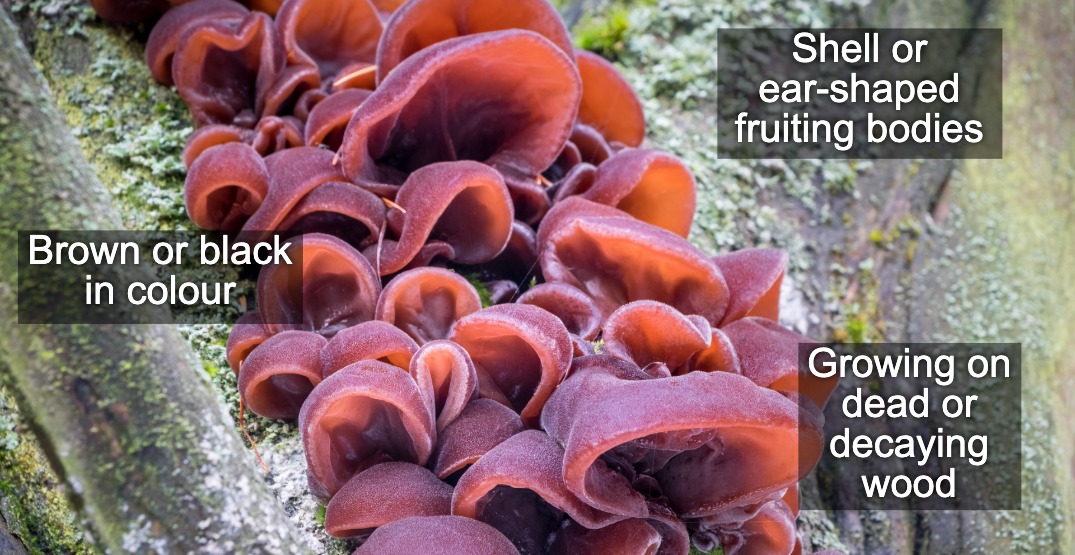 Also known as Auricularia, this is an edible jelly fungus shaped like an ear or shell. Sometimes, they’re even veiny like a real ear!

Expect a gelatinous cap that’s not squishy to the touch and a grey or brown skin. They grow in tightly-packed clusters, often bursting out of crevices along paths or in the bark of tree.

Their taste is quite mild, but they’re often used in Chinese recipes to add a little crunch to a meal. Chop them up and cook them into a soup, rice dish, or salad to shake things up in the kitchen. 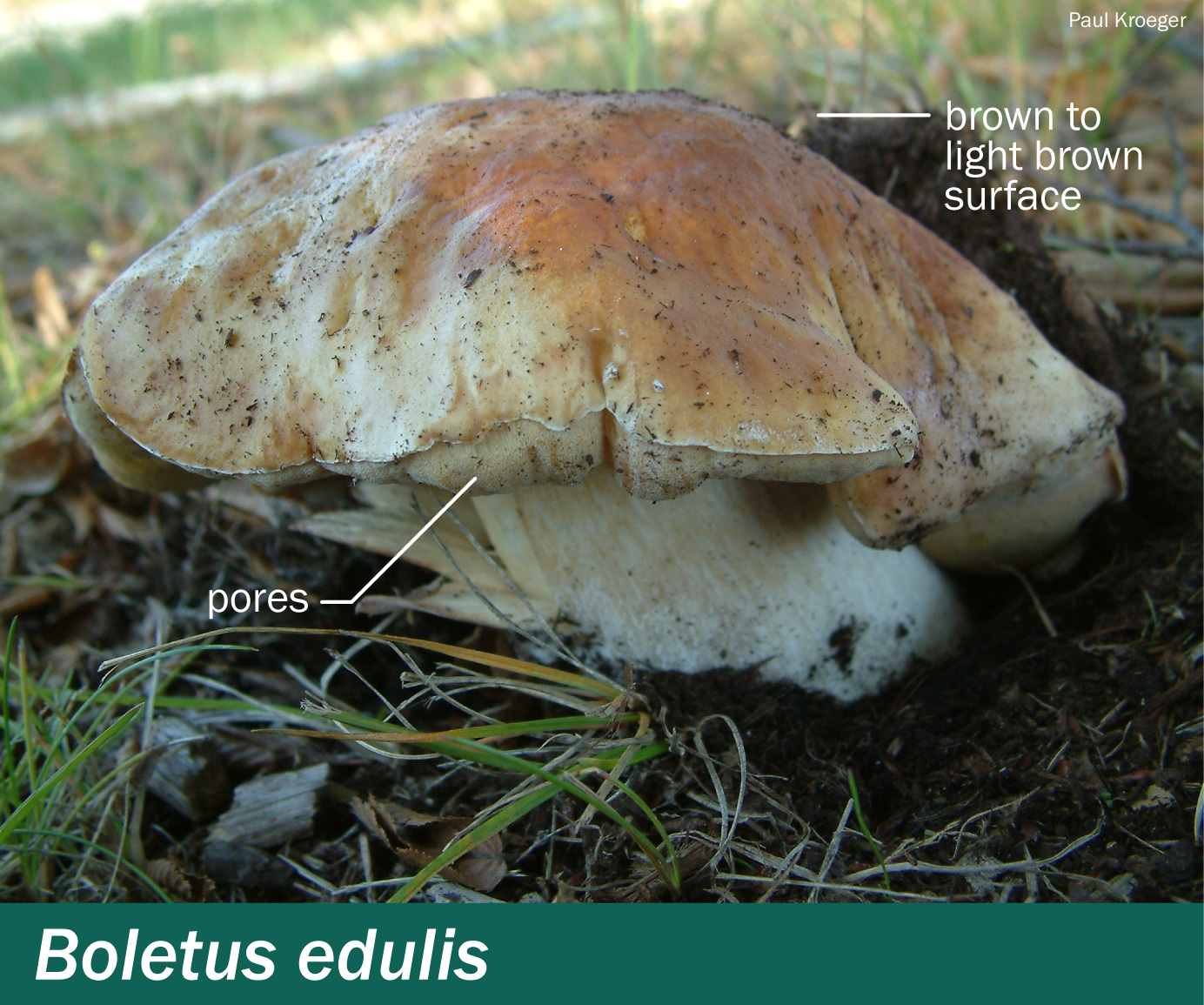 A porcini mushroom, which is safe to eat – Beaty Biodiversity Museum/Website

One of many boletes in the area, but almost definitely the most famous, this cute little mushroom should look like a freshly-baked bread bun. Porcini mushrooms are poofy, usually a shade between beige, copper, and brown. Look for pores on the light underbelly of the cap on this specimen, also called Boletus edulis.

If you manage to find these, you’ve got your hands on one of the best culinary mushrooms around. They can be hard to find in spring, but once they’re 100% positively identified, go ahead and make whatever mushroom-y meal your heart desires. 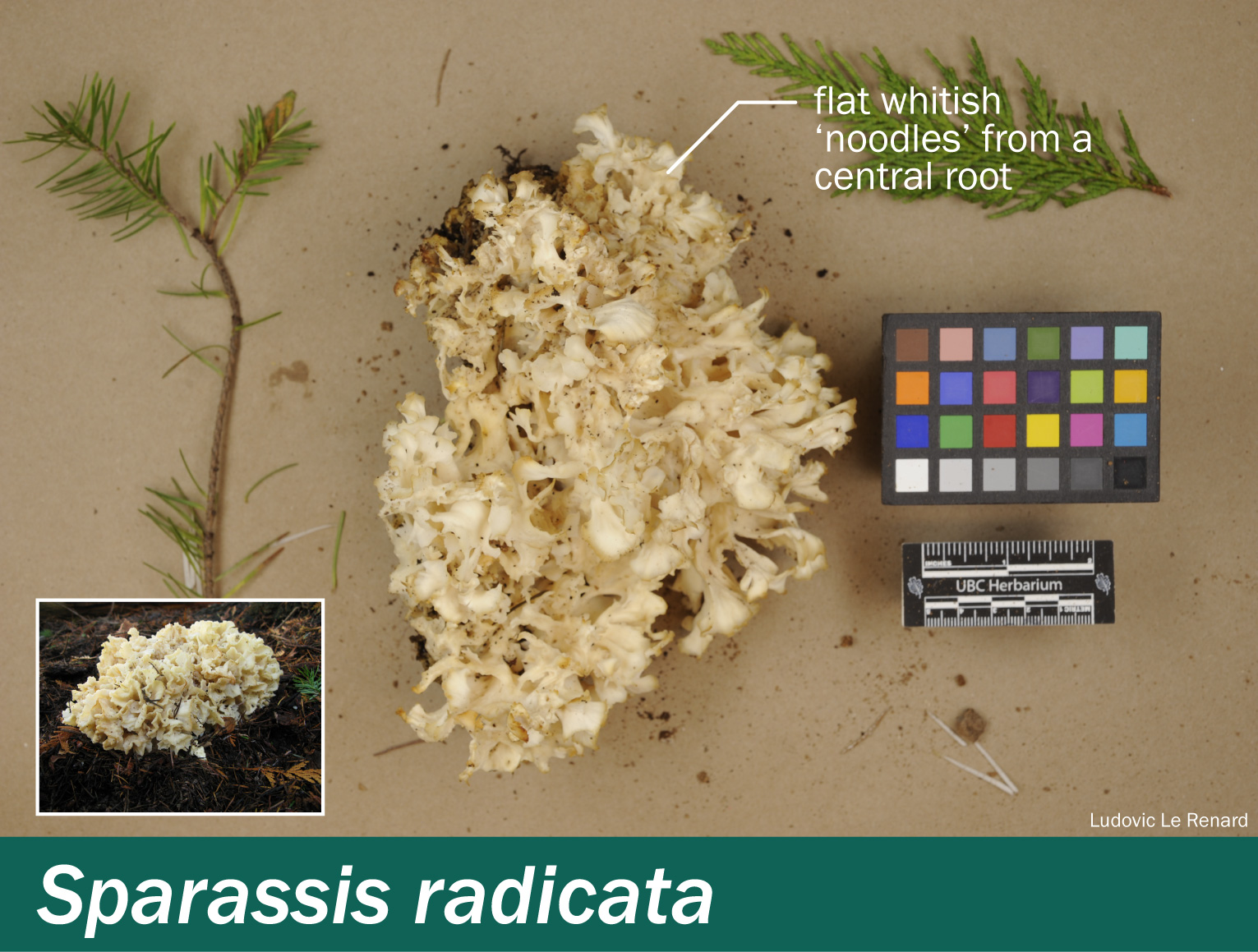 It’s edible, even though it doesn’t really look like it at first. This white, scrunched-up mushroom can be used in a variety of recipes. Cream when it’s young, it yellows with age and grows in near the roots of conifer trees.

You can tell a cauliflower mushroom apart from others because of its flat “noodles” springing from a central root. Try to get them while they’re fresh for more potent specimens. 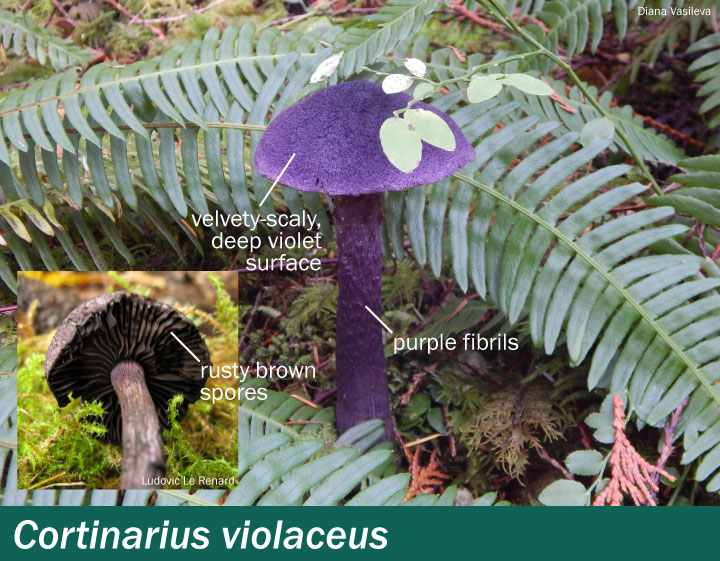 This edible mushroom smells like cedarwood and looks like something out of a fairytale. It has a velvety, deep purple or violet cap that’s easy to recognize on the forest flore. You can often find it in mixed forests with Sitka spruce, western hemlock, pines, and hardwoods like oaks.

Don’t confuse these with blewits or the western amethyst deceiver, also known as Laccaria amethysteo-occidentalis, which look similar and are also edible (with caution), but both have white spores. They also lack the violet webcap’s dark purple gills, a unique trait to the specimen. 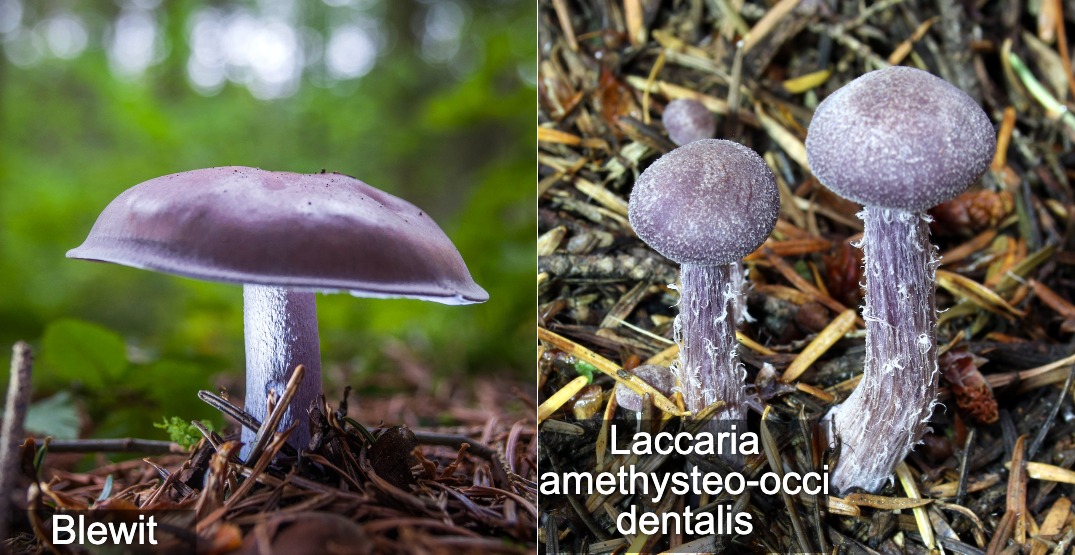 These are just a handful of the mushrooms you can find in BC this spring. Keep learning, reading, and foraging, and you could become a part of the fungi fandom in no time.

Daily Hive Vancouver has reached out to the UBC Farm School and Beaty Biodiversity Museum for an interview with a mushroom expert and will update this article.

With files from Beaty Biodiversity Museum.