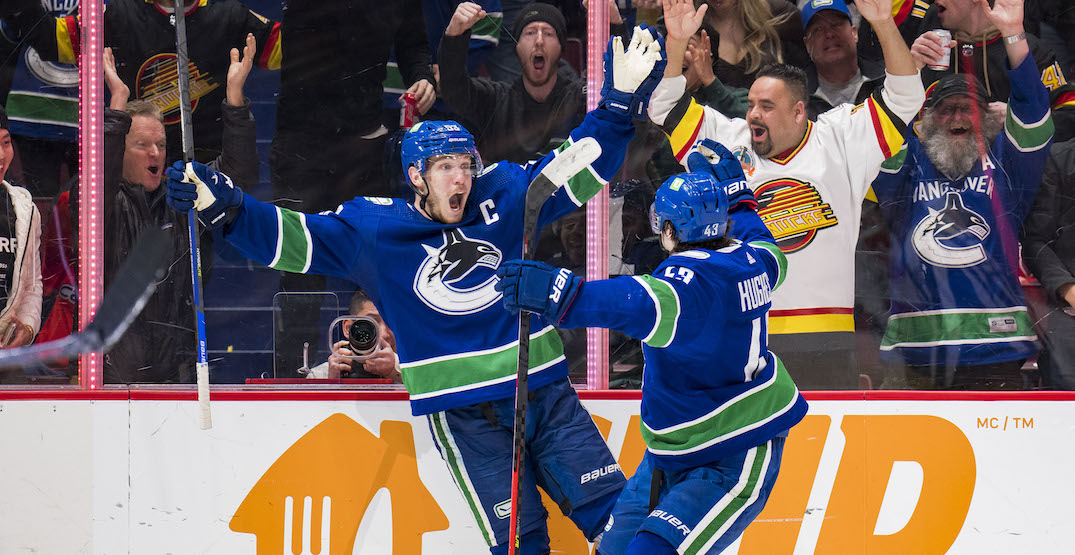 The smiles coming out of the Sportsnet 650 studios have been big since the latest ratings book was released.

A number of factors helped with the ratings boost, with the most obvious one being the demise of TSN 1040 in February of 2021. Regardless of that fact, it does set up a bright future for Sportsnet.

In the winter ratings book one year ago, Sportsnet captured a mere 1.9 share with males aged 24-54, which is a prized demographic in the sports radio business, during the morning show time slot (6 am to 10 am).

With TSN gone, the morning show numbers jumped to a 3.5 share during the spring ratings period. Fast-forward to the 2022 winter ratings book and Sportsnet 650 captured a 6.9 share, with Halford and Brough having moved from TSN to Sportsnet after 1040’s demise.

Elsewhere, the midday slot from 10 am to 3 pm — comprised of The Jeff Marek Show, the Canucks Hour with Jamie Dodd and Thomas Drance, and The People’s Show, hosted by Bik Nizzar and Randip Janda — has a 4.9 share. One year ago, Sportsnet was sitting at 2.7 in that time slot.

Much like the morning show, much of the midday programming was tweaked leading into this book.

The afternoon time frame, which now includes a portion of The People’s Show, but is mainly comprised of Canucks Central with Satiar Shah and Dan Riccio, saw a massive spike in ratings, up to 7.1 from 1.7 a year ago. It also boasted some Canucks radio broadcasts during the ratings cycle.

Both The People’s Show and Canucks Central moved from 10th in the market up to fifth during their respective time slots.

TSN 1040 closing its doors has helped, but so has the improved play of the Canucks. COVID-19 restrictions have also loosened from a year ago, resulting in people spending more time in their cars.

The Canucks have gone through management and coaching changes, and the play on the ice has been more inspired. Winning is good for business in sports radio.

Instead of beating a dead horse about firing the coach and GM, sports radio is now talking about what moves can be made to either push the team into the playoffs, or rebuild and get assets for players like J.T. Miller and others. They’re topics that can be debated rather than continual one-sided ‘the team sucks’ conversations that are easily tuned out.

“The best thing that can happen in sports radio is a team on the cusp of a playoff spot or bowing out,” a sports radio consultant once said. “The ebb and flow of a team on a daily basis will drive listeners to your station for the hosts and audience reaction because it’s instantaneous. If it’s all bad news, people stop listening.”

People may still debate about whether hosts are their cup of tea, or if topics chosen for on-air consumption at the right ones, but that points to people listening. Because while one sports station became a joke, the other seems to be moving in the right direction.

Congrats are in order for CKST 1040 AM who finished 19th out of 19 measuring stations in Vancouver in the recent PPM 12+ ratings! Funny FM finished behind such giants as the Traffic Station, Bloomberg and a Christian station in Lynden, WA. A 0.2 rating, now that's funny. #Bell pic.twitter.com/x4nj5Puse6

Bell Media broadcasted Seattle Seahawks games this past season on Bloomberg Radio 1410. Former TSN 1040 radio host Bob “Moj” Marjanovich had purchased airtime to provide both pre- and post-game coverage, but after the trading of Russell Wilson and a potential rebuild in Seattle, a decision on whether he will do the same next season is still up for discussion.

Regardless, 1410 will continue to broadcast Seahawks games for at least one more season.

Baseball is back after MLB players and owners reached an agreement, and games will be heard on Sportsnet 650 this summer. While the schedule is still being fine-tuned, expect to hear Vancouver Canadians games, as well as weekend broadcasts featuring the Toronto Blue Jays and Seattle Mariners.