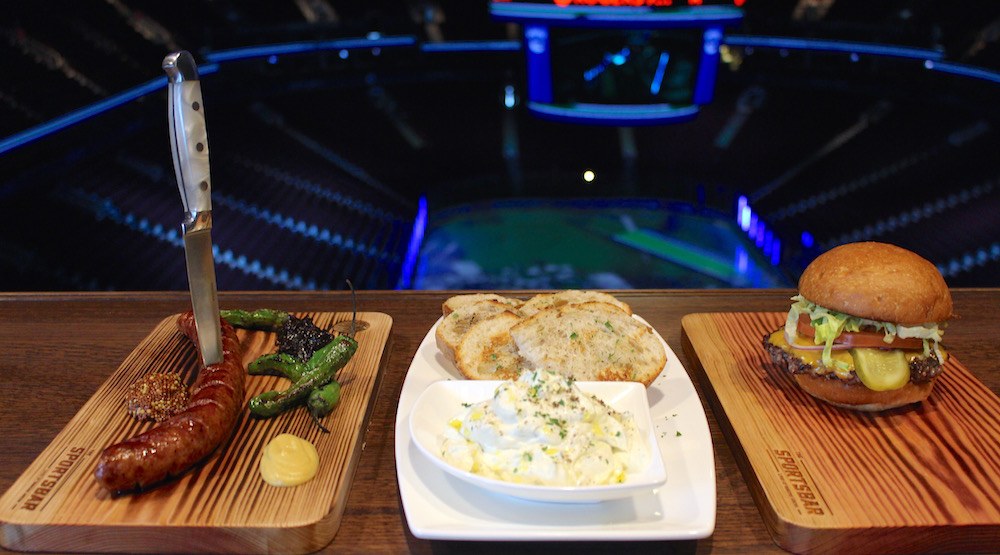 It’s the first and only restaurant of its kind in North America: The Sportsbar at Rogers Arena takes “being at the game” to a whole new level, thanks to a unique interactive design that places it bowl-side and open air, letting patrons be as close to the game as possible without a ticket.

The project, which has been in the works for years, opens for the first time on Friday, December 16, for the Canucks game versus the Tampa Bay Lightning.

With 14,000 square feet of dining, bar, and private room space, The Sportsbar offers Canucks fans an immersive experience, from the 100 TV screens placed everywhere from at individual tables to above the urinals in the men’s room. There will be a live in-house DJ that will keep everyone entertained during TV timeouts and a special lighting system and goal horn that will go off whenever the Canucks score. 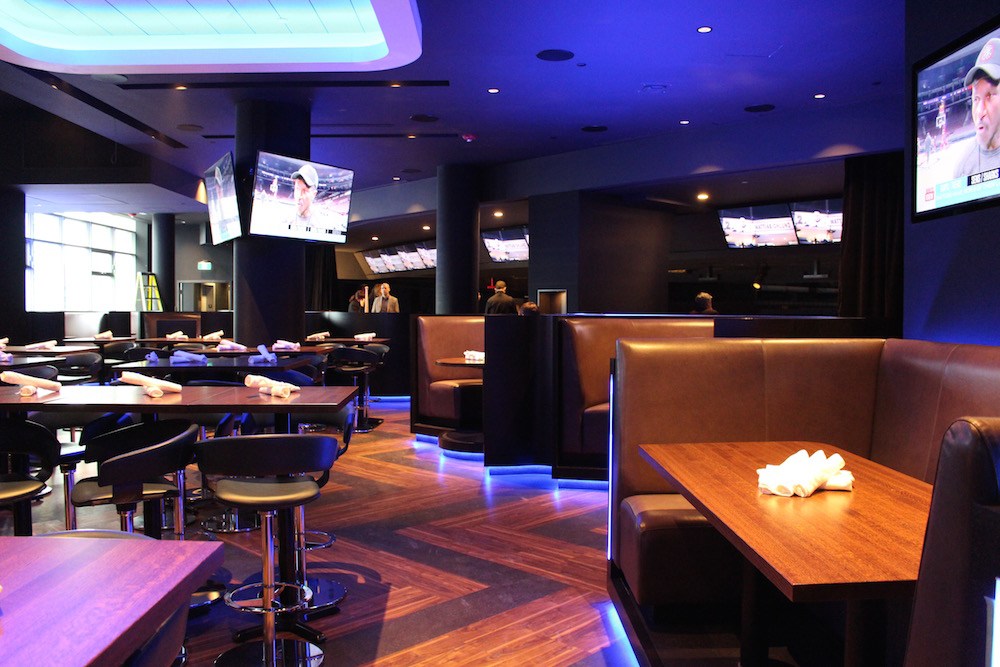 One striking feature is the 90-foot long bar–that just happens to be the same length as an NHL blue line–with a cracked ice top. It’s the longest bar in Vancouver, to boot, seating 42 guests, with staff pouring from 54 taps that offer a selection of 18 brews, including some fun craft options, like local favourites from 33 Acres and Hoyne amidst the import and domestic beers.

Also behind the bar is a 16-foot projection television, ensuring no one misses key game action. However, if you’re seated at booths equipped with TVs, guests will love that they can change the channels themselves, as well as keep their phones charged up using the outlets.

There are 180 seats that have a full view of the ice, which will be ticketed, and accessed from The Sportsbar, which itself is located off the Georgia Viaduct in the new tower on the west side of the arena. The remaining 344 seats, some of which have a partial view of the arena, do not require tickets.

Fans might be surprised to find out that the club-owned restaurant is sports-themed, but not specifically Canucks-themed. A stick wall contains actual player sticks from star players from around the NHL. Pepper shakers are the size and shape of a small baseball bat, and the men’s and women’s washroom signs have people with ice skates on. 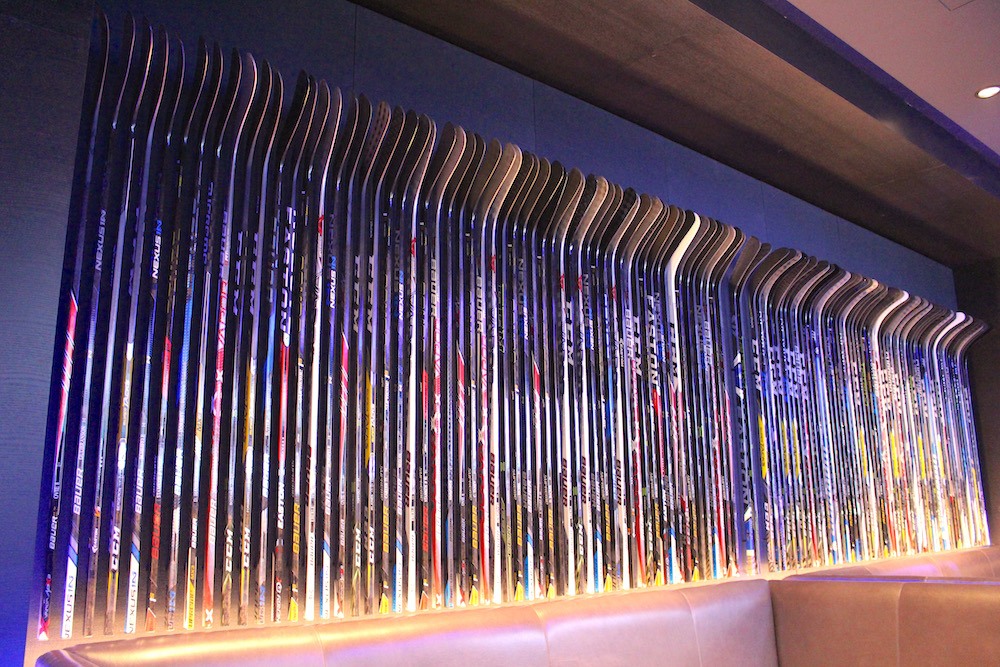 The President of Aquilini Hospitality and Live Entertainment is Michael Doyle, the same person who designed and opened the insanely popular Real Sports Bar and Grill in Toronto, which was named the top sports bar in North America by ESPN when it first opened. Doyle had much less space to work with at The Sportsbar, but has the advantage of sharing the atmosphere with the arena bowl.

The food and drink

When it comes to food, the concept is a winning one; Executive Chef Robert Bartley has designed a menu of high-quality bar-style eats that are executed using carefully-sourced ingredients. With just a tiny freezer space, the emphasis here is on freshness, as well as offering foods that are made in-house or brought in from best-in-class purveyors, from the ranch-style dressing they do themselves to their own kick-ass caramel peanut popcorn that puts Cracker Jack to shame. 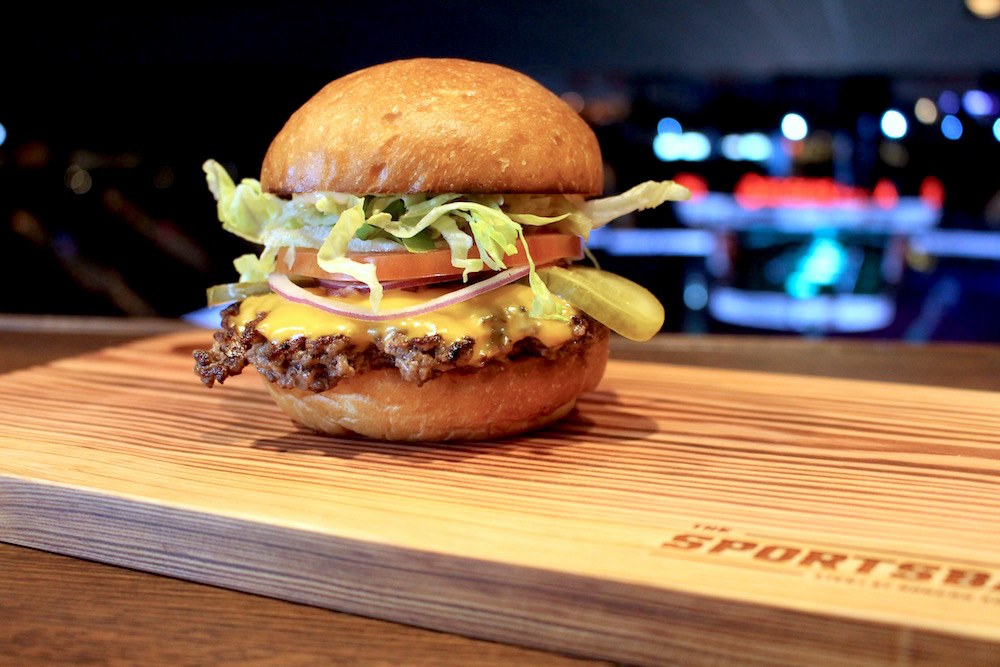 Look for eats like a classic cheeseburger boasting a special house-made sauce, grilled farmer’s sauces, a whipped ricotta with sourdough toast, salads, hot dogs, sandwiches, and an array of entrees and appies that represent the best of global pub-style eats. In addition to the beers on tap, The Sportsbar has a broad selection of wines by the glass and bottle, beers in bottles and cans, cocktails, boozy coffees, and non-alcoholic options.

The Sportsbar is designed to be an inclusive space, so guests who would prefer not to sit in high-top tables can get a standard-height table in the “lounge” room, and families are welcome, too. One welcome design feature is that the tables are not bolted down, so large groups can be accommodated by pushing tables together. 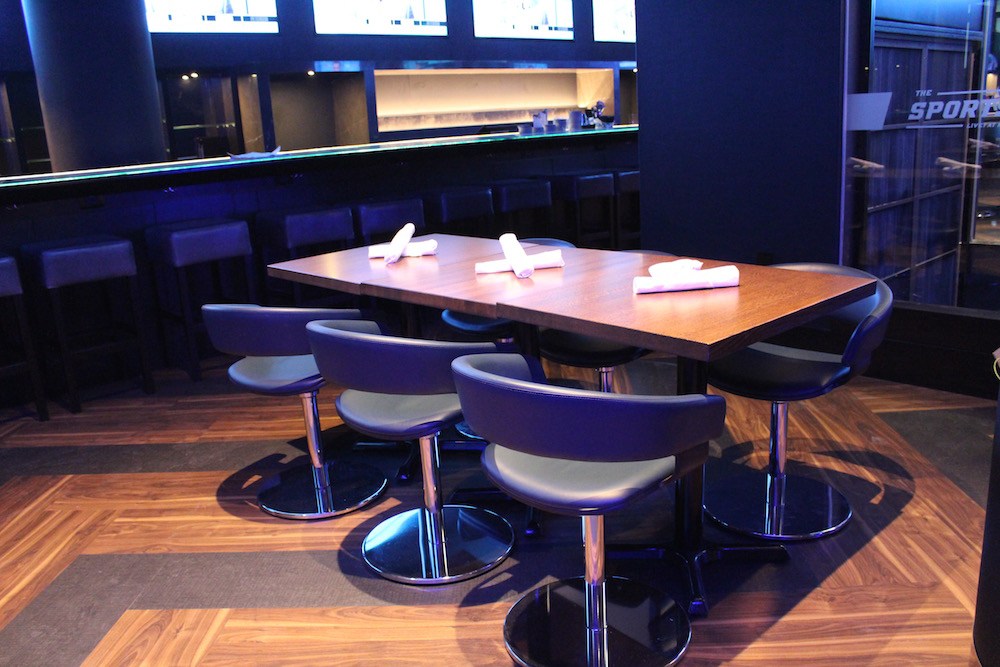 The Sportsbar is launching with an event-based schedule, which means you can enjoy the space, food, and drink on Canucks home game days, as well as during major sporting events (i.e. The Super Bowl) and for live concerts, however it’s important to note that during concerts the curtains will be drawn as they cannot offer guests a view of the performance.

The Sportsbar will open up three hours ahead of game time and show time, which means anyone attending the event can also enjoy the restaurant and bar as a pre (and post) event option.

Here are some more images from our pre-opening tour: 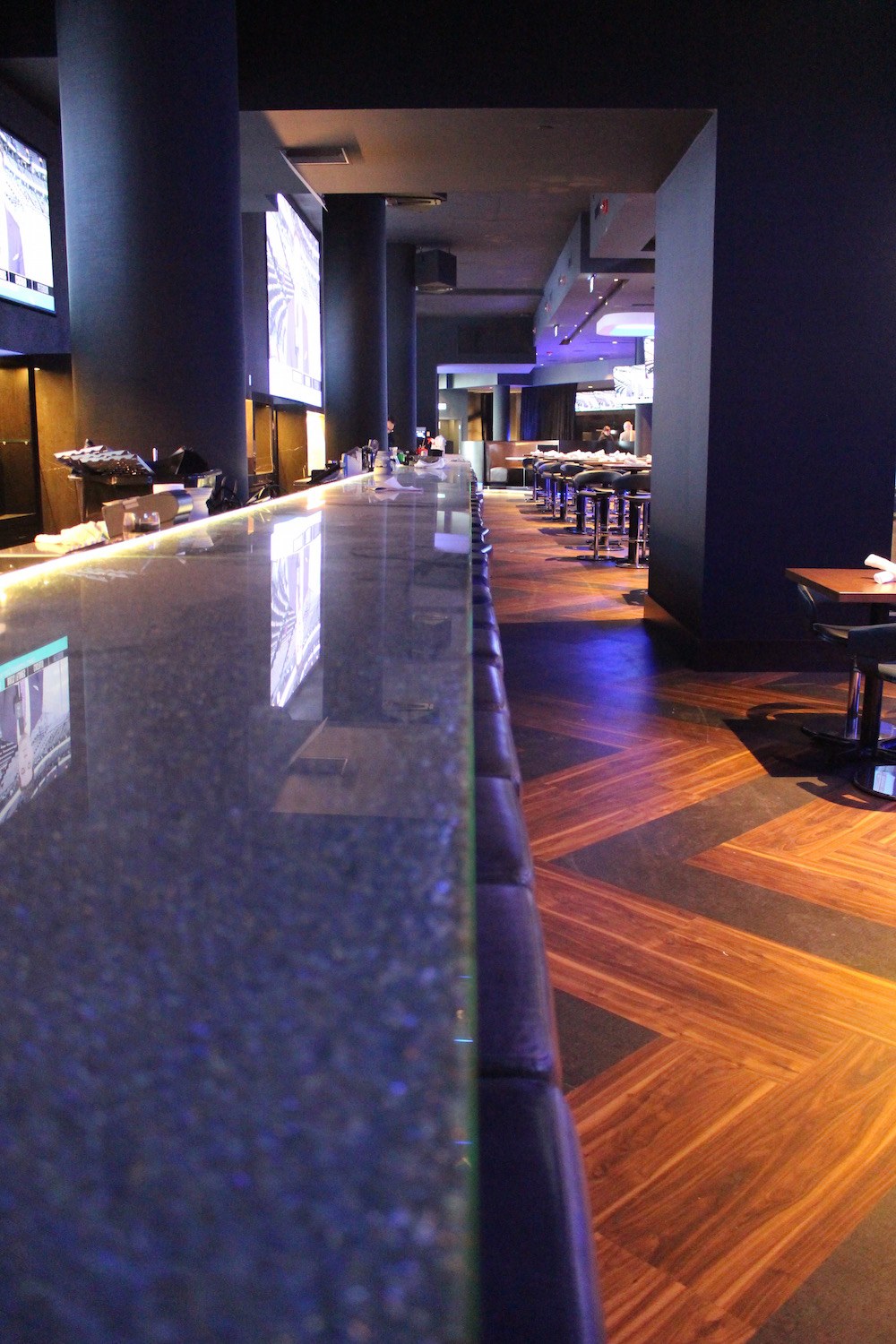 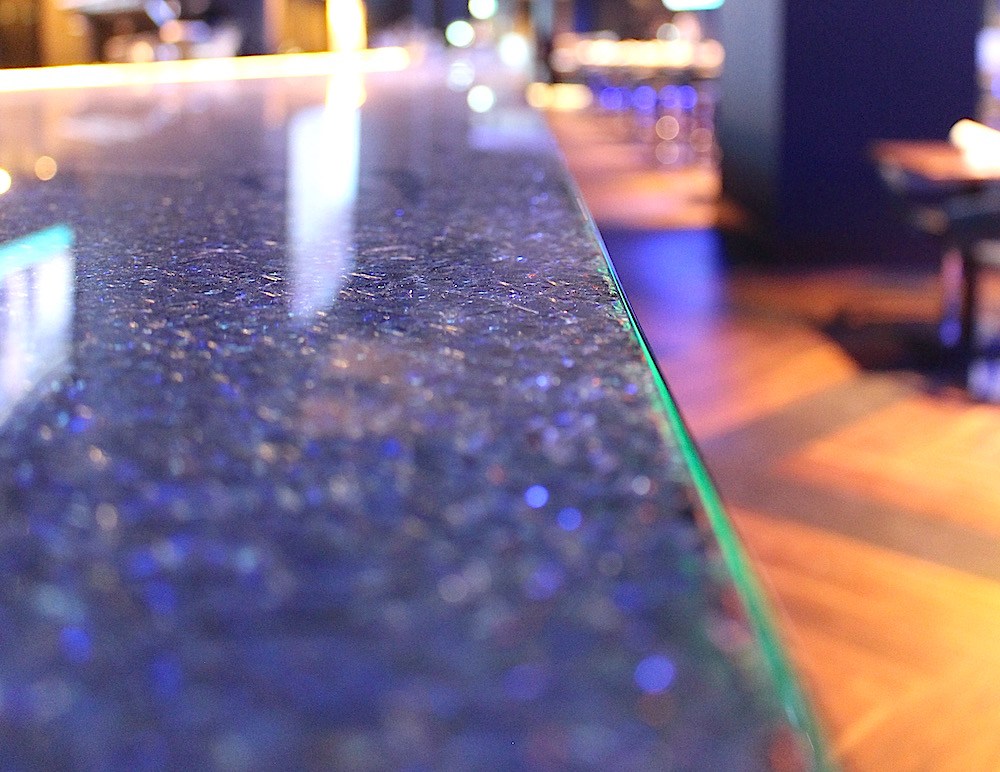 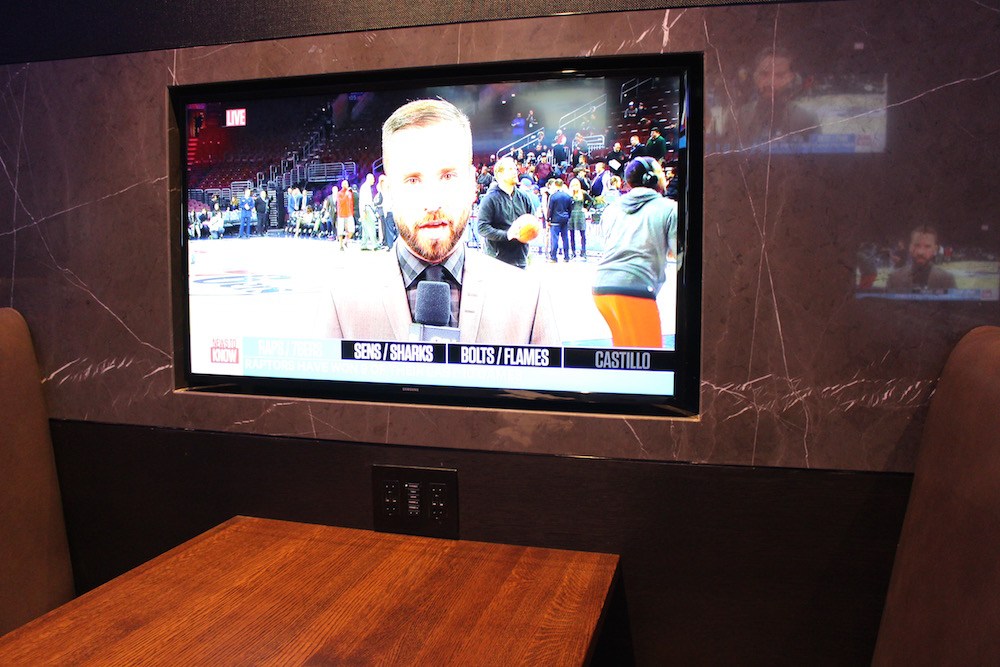 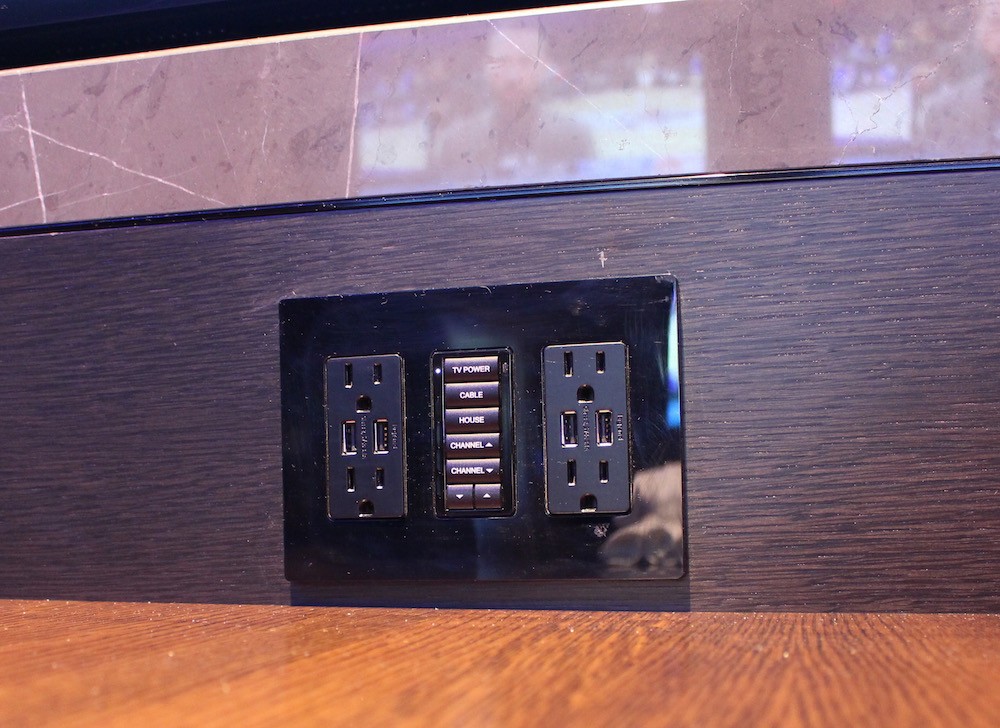 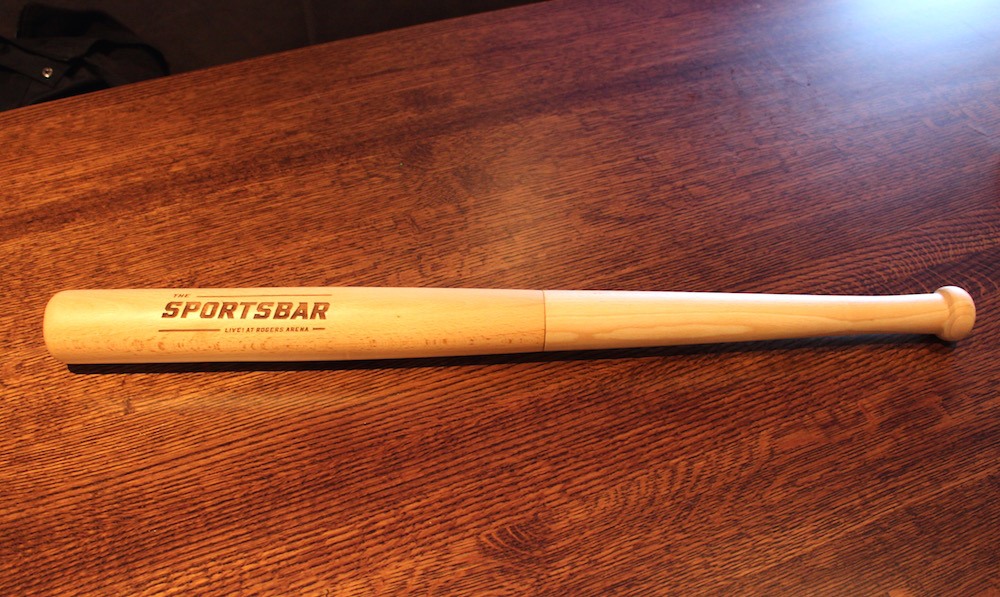 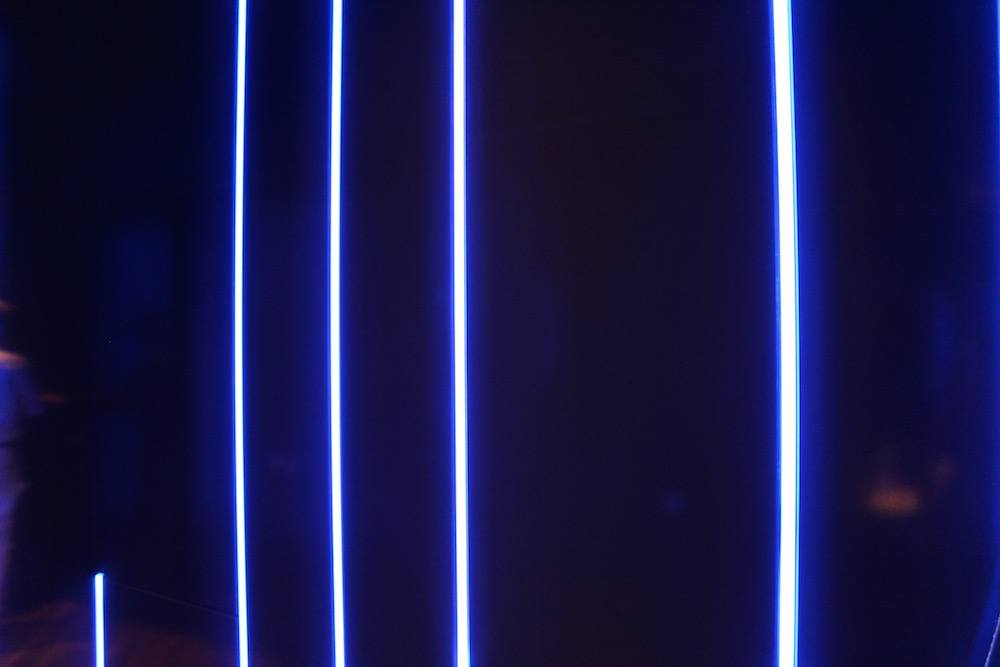 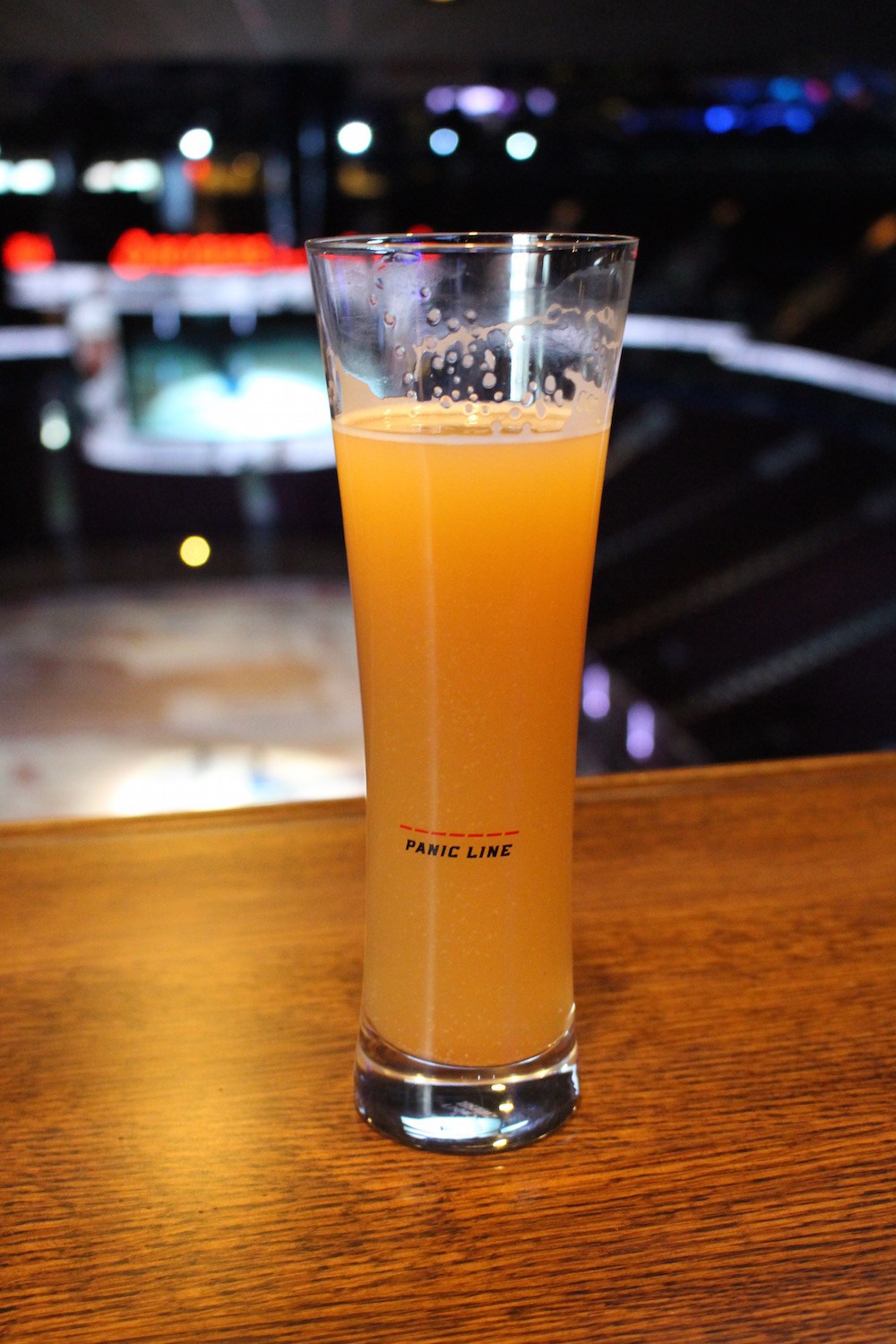 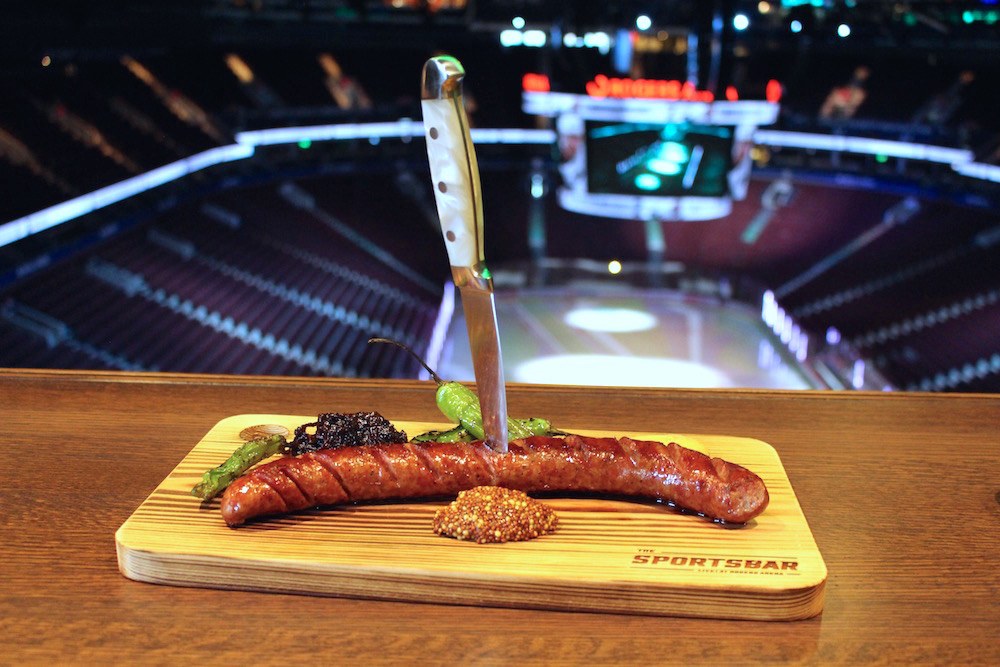 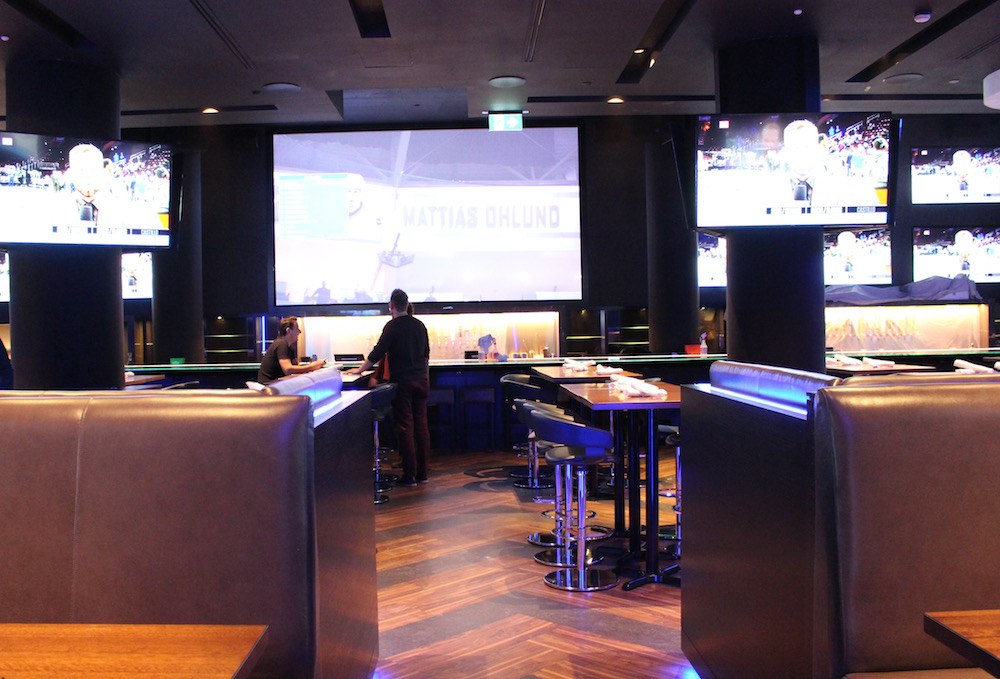 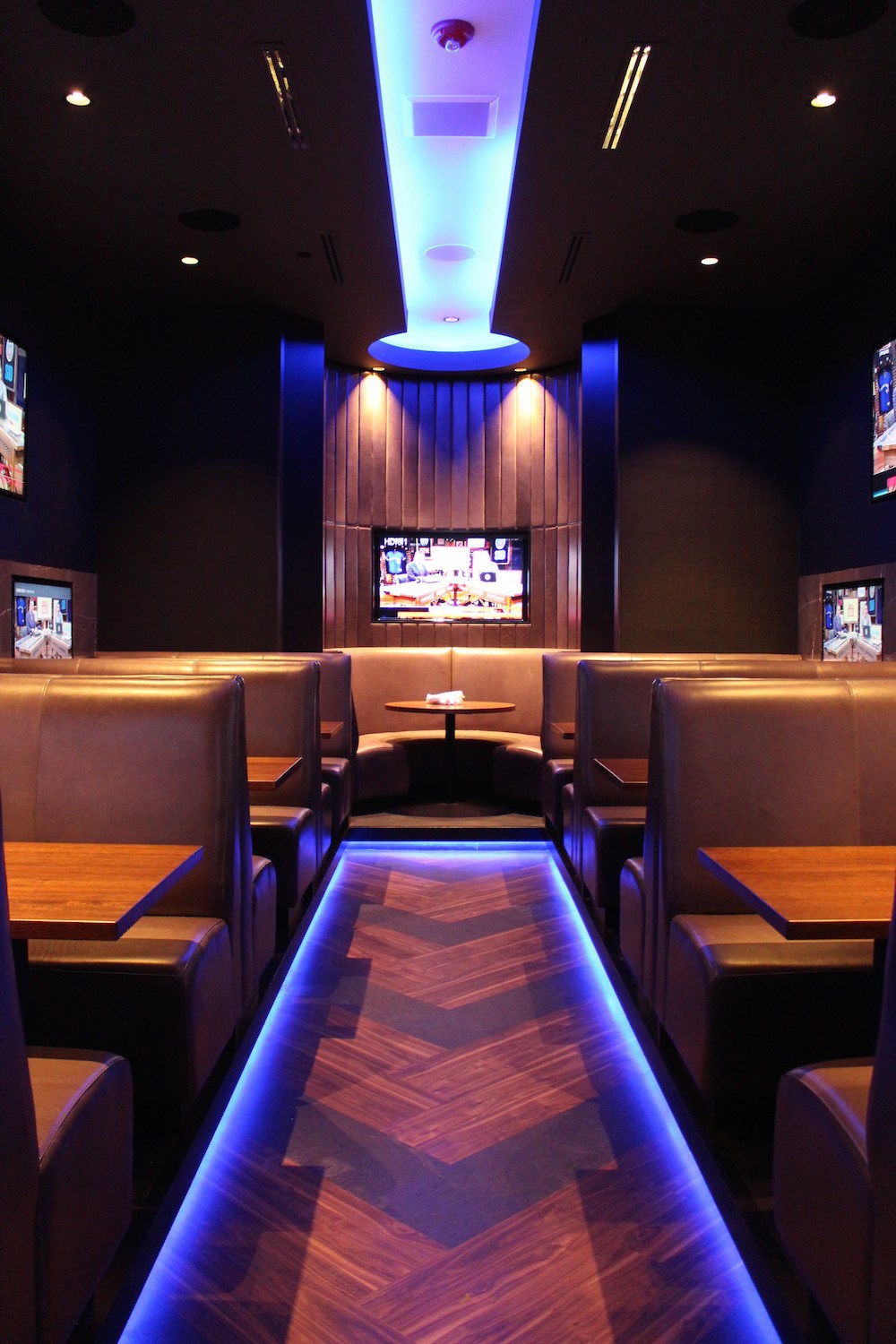 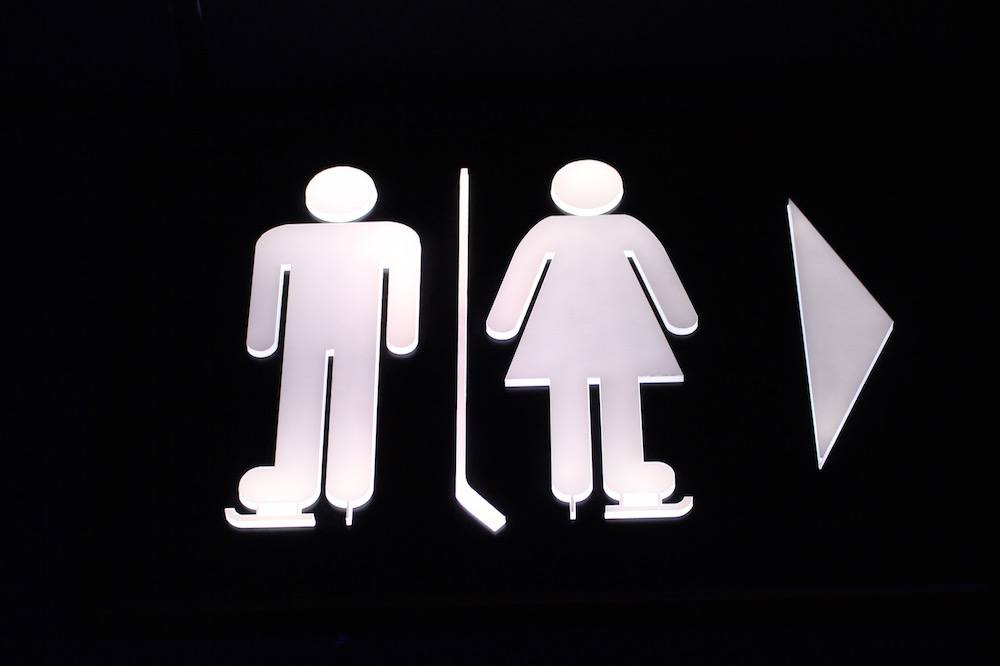 The Sportsbar Live! at Rogers Arena