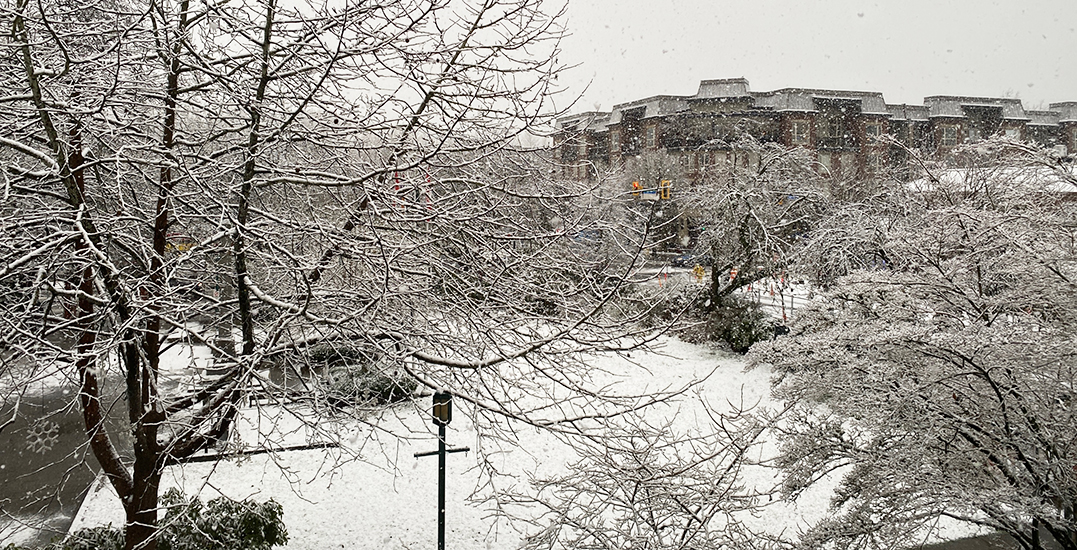 Metro Vancouver residents woke up on Tuesday morning to different parts of the region blanketed in snow.

A special weather statement was issued by Environment Canada on Monday and still remains in effect, forecasting up to 5 cm of snow across the following areas:

Snow is expected to continue through Tuesday morning and has already posed some challenges for drivers during their morning commute.

Rain in downtown Vancouver. Slush and snow in Coquitlam and PoCo. Shockingly high number of drivers actually slowing down. Stay safe out there.

According to DriveBC, the northbound right lane on the Alex Fraser Bridge is closed for snow removal, with a southbound lane closure to follow.

Northbound right lane on the #AlexFraserBridge #BCHwy91 is closed for snow removal from the bridge structure. Southbound lane closure will follow. Please use caution. #RichmondBC #DeltaBC

A number of TransLink detours are also in effect due to road conditions.

Here’s what different parts of Metro Vancouver look like so far; be sure to check DriveBC and TransLink for updates and the latest information before you go.

This should have been a Snowfall Warning for Vancouver standards. But I’m not the experts here and forecasting Snow in this city is a gigantic pain in the ass… @ECCCWeatherBC #BCStorm #ShareYourWeather pic.twitter.com/2WWUctjwok

Did it really snow in Vancouver if you don’t post a photo of it snowing in Vancouver? 💙 pic.twitter.com/JxJ9zDbdJ4

#SFU def a prime toboggan destination this AM pic.twitter.com/nWkYDb0jlI

Less snow at the university than home in central Coquitlam. Roads are a mess though. Large truck blocking galardi above the traffic circle. Bus stopped and letting off passengers then at least two cars with no snow tires blocking the second lane. Stay home if no snow tires! pic.twitter.com/Af8Gc6amiL

Snow? Yes it is snowed and it continues to do so!

Crews are out and responding to accumulations on priority routes as needed.

So much snow in New West!! pic.twitter.com/UkIQVb9nsX