Solo: A Star Wars Story takes off into hyperspace this weekend all within a mediocre spaceship to planet forgettable.

I don’t remember the last time there was hardly any buzz for a Star Wars flick. Maybe Episode 8: The Last Jedi still lingers like a bad taste for some fans or maybe all the production issues this movie had to deal with, kept them cautiously optimistic? Whatever it is, people should flock to the theatres with low expectations, hoping to be somewhat entertained. 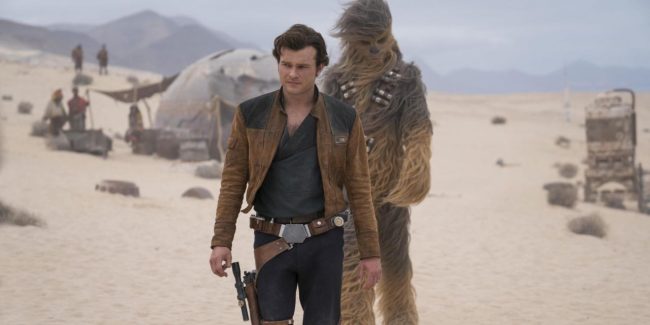 A young Imperial Foot Soldier named Han (Alden Ehrenreich) along with his new hairy friend Chewbacca, join up with a gang of smugglers led by a man named Beckett (Woody Harrelson). This crew of misfits plans to execute a dangerous heist on behalf of the galaxy’s most powerful gangster.

Did we really need a Han Solo movie?

Production issues and reshoots plagued this film and right from the getgo people wondered if Disney was about to ruin one of the most beloved characters in the Star Wars Universe. I’m here to tell you that “ruin” would be a harsh way of putting it. 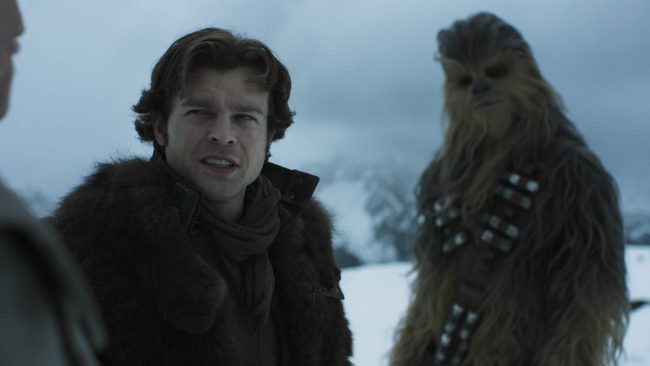 What do you expect when you bring on the likes of Ron Howard as a director? He has always been a notorious vanilla filmmaker.

Similar to what happened in the making of Rogue One, Lucasfilm president Kathleen Kennedy fired comedic directors Phil Lord and Christopher Miller (Lego Movies, 21 Jump Street) at the 11th hour of the Solo production due to “creative differences.”

Throughout the movie, I was waiting for something creative to happen.

A couple of years ago we had the dark and grim Rogue One and late last year we had the thought-provoking The Last Jedi, but Solo: A Star Wars Story’s primary goals are a little less lofty. This is a film that is entirely powered by pure nostalgia and warm fuzzy feelings. There is nothing wrong with that approach, and it’s probably necessary since this is a prequel involving established characters like Han Solo and Chewbacca.

A lot of the tension is sucked away from the story because the audience knows no matter what happens, the main characters will survive. That undercuts a lot of the action and drama as there is never any fear of genuine danger. Instead, the characters are given copious amounts of personality, which goes a long way in a fluffy summertime popcorn flick such as this. 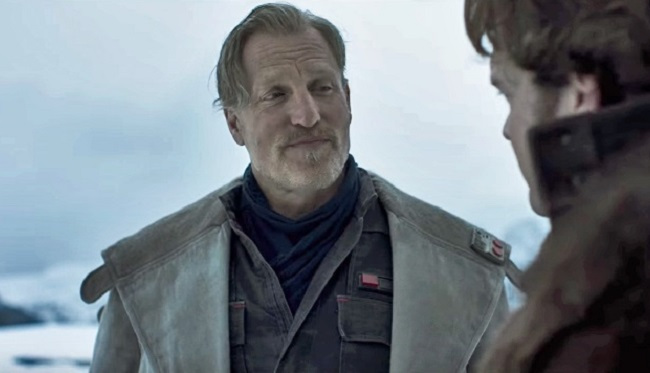 Unfortunately, I just couldn’t believe I was seeing Han Solo on screen.

Alden Ehrenreich is a good actor who was put into the uncomfortable and challenging position of having to remind you of Harrison Ford. Han Solo is such an iconic role, and Ehrenreich may possess the charm, but he didn’t have the same energy that is needed for the part. It’s not like he was terrible, but at no point was I convinced he was playing the same character as his predecessor.

On the other hand, Donald Glover does find his inner Billy Dee Williams as Lando. His cadence and overall swagger is a nod to how the character was originally portrayed, but Glover is able to put his personal touch on the role to make it his own, even when the plot takes a backseat to his conman shenanigans.

Both Woody Harrelson and Emilia Clarke benefit from playing original parts, and they bring some intrigue to the film. But it’s Phoebe Waller-Bridge (Fleabag), as Lando’s amorous droid, who steals every scene she’s in. What’s ironic is that over the last few years it seems like the droids bring more humanity to these Star Wars films than the actual human do. 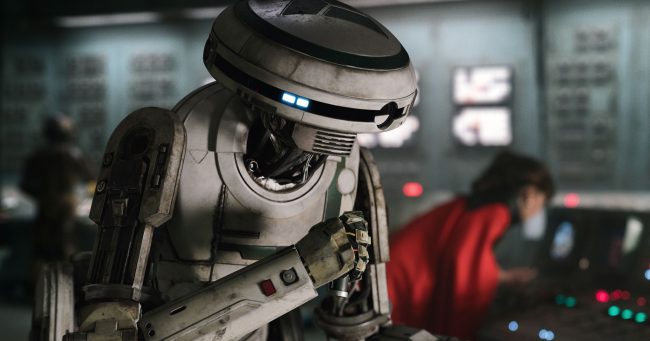 Phoebe Waller-Bridge as the droid L3-37 steals every scene she is in. Image: Disney Pictures

Overall Solo brings nothing new to the universe. It ticks a lot of the backstory boxes and answers questions you didn’t know you needed answered, with everything feeling like forced fan service. I wish the studio took a risk and allowed the original directors to do something a bit more quirky and fun with the characters and story.

At the end of the day, Solo: A Star Wars Story plays it safe and is engineered to be cute and charming. Sure there are some nice moments throughout, but they all add up to a mountain of mostly nothing. The action sequences alone were uncreative and uneventful and who would have ever thought I would say that about a Star Wars movie?

Solo: A Star Wars Story is a serviceable action film that won’t wow fans, but it’s also not god awful. As I said, go into it with extremely low expectations, and you might come out the other side with, “that was okay.”

Playing at a theatre near you. Rated: PG-13 (for sequences of sci-fi action/violence). 135 minutes long.