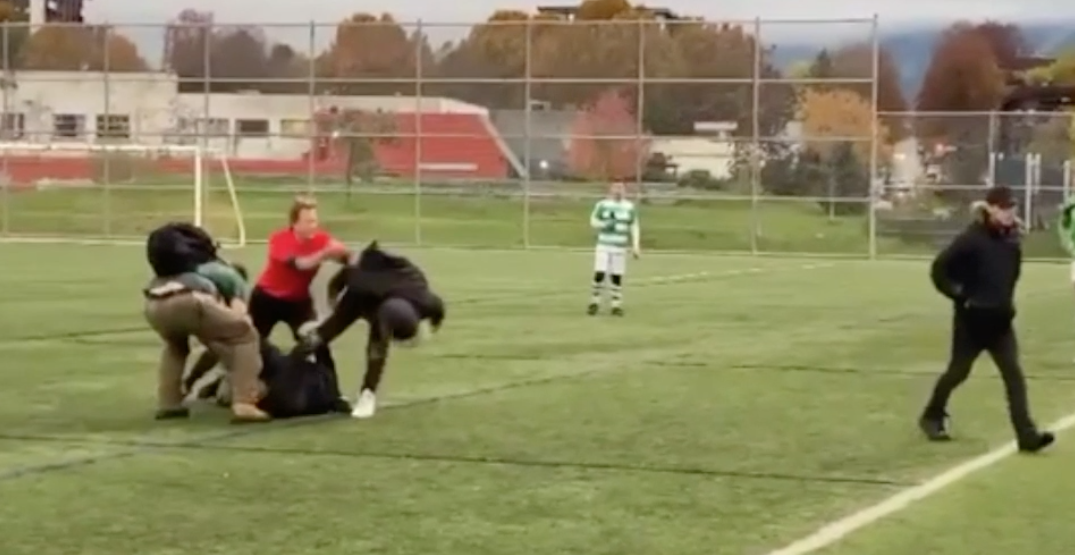 The referee who pushed attackers off of a stabbing victim on a Strathcona soccer field Saturday said his heroic actions came as an instinct help the man in trouble.

Dieter Trenkel was officiating a 4 pm match between the Vancouver Harps and the United Lions at the Trillium West field when a man hopped the fence and jogged onto the turf.

Three other men chased after him, pushed him to the ground, stomped on him, punched him, and stabbed him.

That’s when Trenkel sprinted over and tackled one of the assailants, knocking him away from the victim.

“I had a look around, realized no one’s helping this gentleman, and I charged over,” Trenkel told Daily Hive. “I just reacted. I don’t know why. Maybe I was the closest guy.”

Initially Trenkel thought just one man had a knife, but after seeing video footage he thinks a second man may be folding something up and walking away. He was shocked at the brazen violence, and said several 10 to 12-year-old youth players gathered for the next game witnessed what happened.

“What did these people think, they were actually going to get away with this?”

The victim approached Trenkel before the game started asking for help, and Trenkel assumed it was a drug or mental health-related issue. He told the man he was about to referee a game, and that he couldn’t help.

He also saw one of the knife-wielding men beforehand, and advised him to put it away because the soccer game would begin soon. He told the players about the knife, and suggested they film or keep an eye on the man.

But Trenkel didn’t think about the danger of the knife when he ran into the fray.

“I had five brothers, so fighting was never frightening for me,” he said. “I did it. I can’t take it back. Some people are happy that I saved a life, some people are sort of concerned that should look out for myself.”

The commotion apparently started when two girls, who are not seen in the video, started yelling at the victim. Trenkel also said they yelled across the field when he stopped the fighting — allegedly saying the victim needed to die.

Team manager Babak Shahbazi, who performed first aid on the victim, said Trenkel was the hero of the afternoon.

“Dieter, he’s a brave man. He even knew he had a knife… such a good man. Kudos to him.”

Shahbazi tended to the victim until he was picked up by paramedics.

Vancouver Police Department spokesperson Sgt. Steve Addison said it’s not known what sparked the violence, and the incident is still under investigation. No arrests have been made.

“This is obviously a very concerning incident to have happen in the middle of a soccer field,” Addison said.