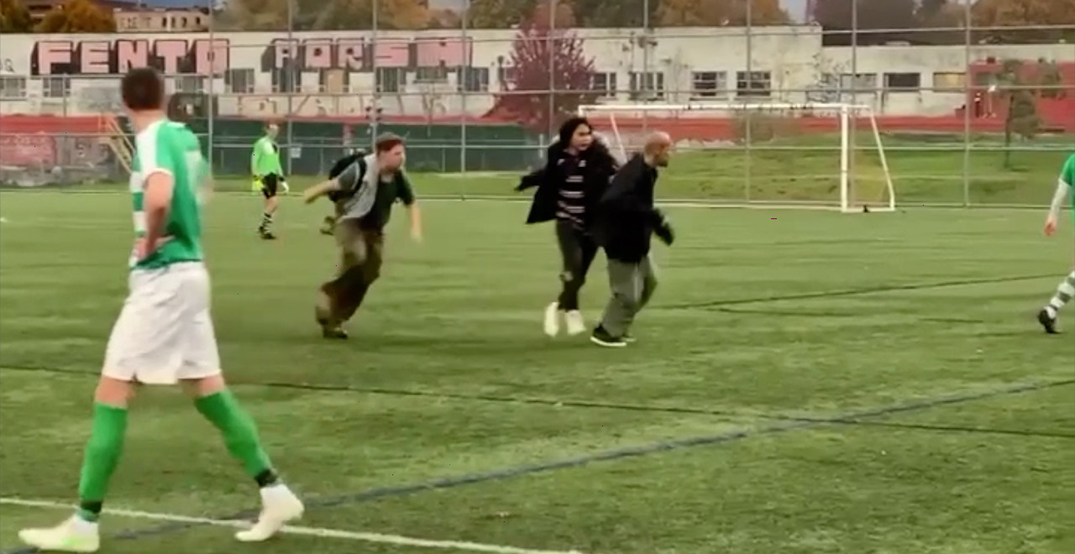 The stabbing occurred at Trillium Park in Strathcona (Submitted)

Editor’s note: This story contains descriptions and images of violence

A man was stabbed on a Vancouver soccer field in the middle of a game Saturday after three other men chased and knocked him down on the grass.

Video from the incident at Trillium East Field in Strathcona shows a man in a black hoodie and green shorts jog onto the pitch, with two men in black jackets following behind him.

“Get off the [expletive] pitch, will you,” one player yells at the men.

A fourth man, wearing a backpack, runs onto the field from the other side and the first man runs away from him.

But the men catch up, and knock him to the ground. One of the men kicks him while he’s lying on the ground, and another stabs him.

That’s when the game’s referee, wearing a red jacket, sprints over and pushes the assailant off.

“It was like a football tackle … I’ve known that ref for years. He’s such a good man, kudos to him,” Shaheen Football Club manager Babak Shahbazi, who witnessed the incident, told Daily hive.

The man with the knife pointed it at the referee after being tackled, Shahbazi said, but the soccer official told the group to leave and the attacker apparently calmed down.

Shahbazi said the commotion started when a girl who was with the attackers started yelling. Attention turned away from the game to the disturbance, and play stopped when the first man hopped over the fence.

“It didn’t seem normal behaviour from these kids,” he said. “Nobody stabs someone in front of 100 spectators thinking normally.”

Nobody was expecting the incident to turn violent, Shahbazi said. When it did, he ran to get a first aid kit from his car to help the victim.

“The poor guy was so distressed, he wouldn’t let us touch him,” Shahbazi told Daily Hive.

He couldn’t see any blood coming from the stab wound, and tended to the cuts on the man’s face until paramedics arrived.

“That was the craziest thing I’ve seen in my life,” he said. “I was sad more than anything else … All these guys, big guys, all athletes. In front of all of us this guy gets stabbed and none of us could do anything.”

Vancouver Police Department spokesperson Sgt. Steve Addison said it’s not known what sparked the violence, and the incident is still under investigation. No arrests have been made.

“This is obviously a very concerning incident to have happen in the middle of a soccer field,” Addison said.