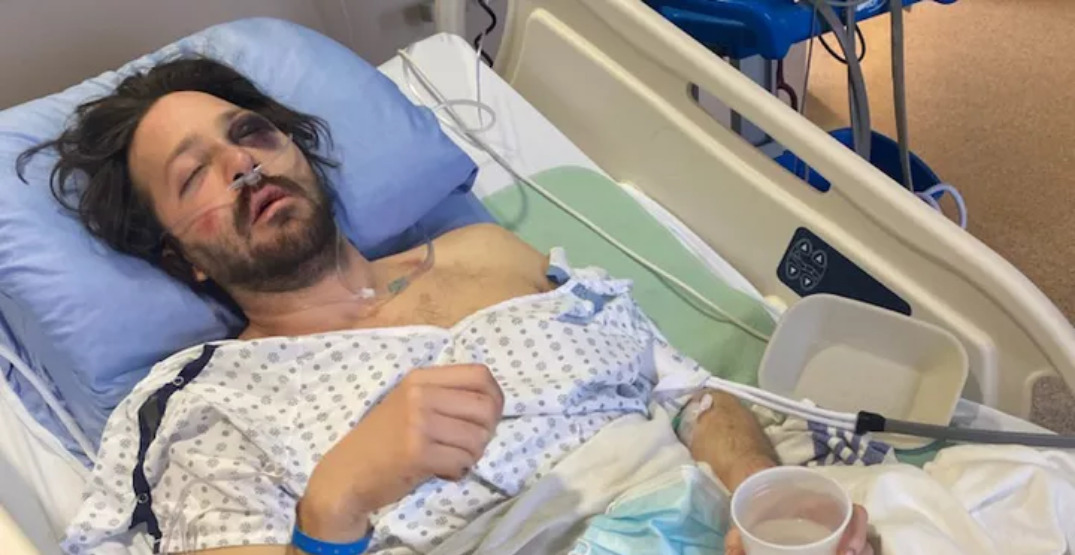 A devastating accident that took place on Highway 99 between Whistler and Squamish will require one man to spend the holidays in hospital.

According to witnesses, a car hit Adam Haubrich head-on at highway speed on the Sea-to-Sky Highway. He was then T-boned on the driver’s side by another vehicle and got pushed into the guard rail.

Haubrich has now undergone a series of surgeries, including one to fix his femur which has multiple screws and a rod holding it in place. He has also had facial reconstruction surgery, which involved 10 metal plates being placed in his face.

Daily Hive spoke with Jessie Morden, the organizer of an GoFundMe fundraiser who is also a friend of Haubrich and his fiance, helping to relay the message about Haubrich’s condition.

“He will be in the hospital for about a month, maybe more. He is still in a fragile state so we don’t know the full prognosis,” she said.

“He still has another surgery and more scans. We do know that the brain bleed has stopped and there doesn’t seem to be any residual damage from that. The fractures to his spine haven’t affected his mobility. The femur is a huge hurdle but we are taking it day by day.”

Morden says that Haubrich is one of the funniest and nicest people, “and wants the best for everyone around him. He brings smile to every single person he crosses paths with. Even through all this he hasn’t lost that touch.”

Before this accident, Haubrich, a Squamish resident, was working in Whistler for a painting company. His passion is snowboarding, and his loved ones fear that he may never be able to do that again.

“In the summer we enjoyed swimming and hiking. The possibility that all of his enjoyments in life will be affected is very grim reality.”

Haubrich is supposed to get married in the spring.

Daily Hive also asked how the public could help aside from donating to the GoFundMe page, which has exceed its goal and has raised more than $50,000 at the time of publication.

“Drive safe! We are terrified to drive on that highway now. This is the second accident he has been in in a month that wasn’t his fault. I was also in a terrible accident in 2016 that broke my back. People need to slow down, pay attention and pull over if they’re tired. It’s not fair that a life is so hugely affected because of someone’s negligence.”

The crash occurred somewhere between Whistler and Squamish, just south of the salt shed.

Daily Hive has reached out to BC Highway Patrol to see if they can offer any specifics on the Highway 99 accident.