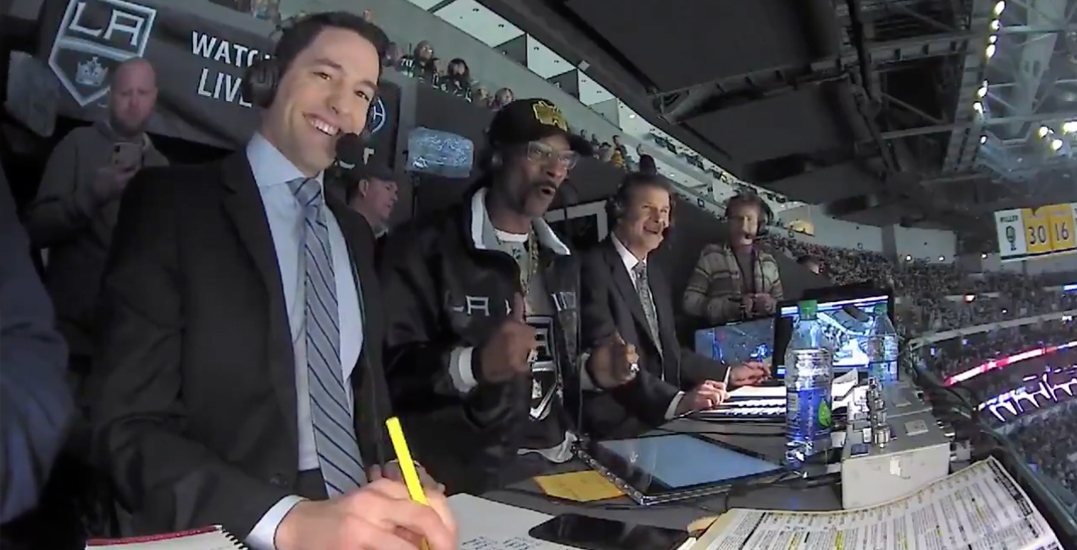 Could hockey analyst be the next episode for The Doggfather?

Snoop Dogg tried his hand in the world of hockey broadcasting during a clash between the Pittsburgh Penguins and Los Angeles Kings at Staples Center on Saturday night.

The hip hop artist was invited by the Kings as a “celebrity guest of honour” for Hockey Night in LA and luckily for all of us, we got to see Snoop drop it like it’s hot in more ways than one.

The evening began with Snoop Dogg spinning tracks during warmup as a guest DJ, followed by him participating in a ceremonial puck drop with captains Anze Kopitar and Sidney Crosby.

After he literally dropped the puck as if it were sizzling, Snoop Dogg jumped behind the mic in the LA Kings broadcast booth as an analyst and dropped gold.

Clearly a fan of the physical side of the game, Snoop had everyone laughing as he reacted to a scrum after a whistle.

The LA Kings had Snoop Dogg in the booth doing play-by-play tonight and it was amazing pic.twitter.com/SbyFc8U4LF

“Hold on now, get it crackin’ then, let’s go—Snoop Dogg in the house let me see something! Drop the sticks man let’s get crackin’ man, to the middle of the rink let’s go!”

Snoop took it up a notch when he was given the play-by-play reigns for an entire Kings power play toward the end of the first period.

Clearly this was unlike any other broadcast in the history of the sport.

The rapper’s night didn’t end in the booth as he stole the show during the post-game press conference, jokingly claiming he believes he could be a hockey analyst and telling media he was the new owner of the Kings.

“I think I could be a hockey analyst”@SnoopDogg brought ALL the goods to Hockey Night in LA 👏 pic.twitter.com/wi9tN4r4Cn

After his media scrum, Snoop Dogg went to the Kings podium in the room where he was. Jokingly said he was the new owner of the Kings and that the team would be getting a stripper pole and a DJ in the locker room … “We’re going to be changing some shit around here”

The Kings walked away with a 4-2 victory and NHL fans were left hoping that they’d see more of Snoop Dogg around the league in the future.