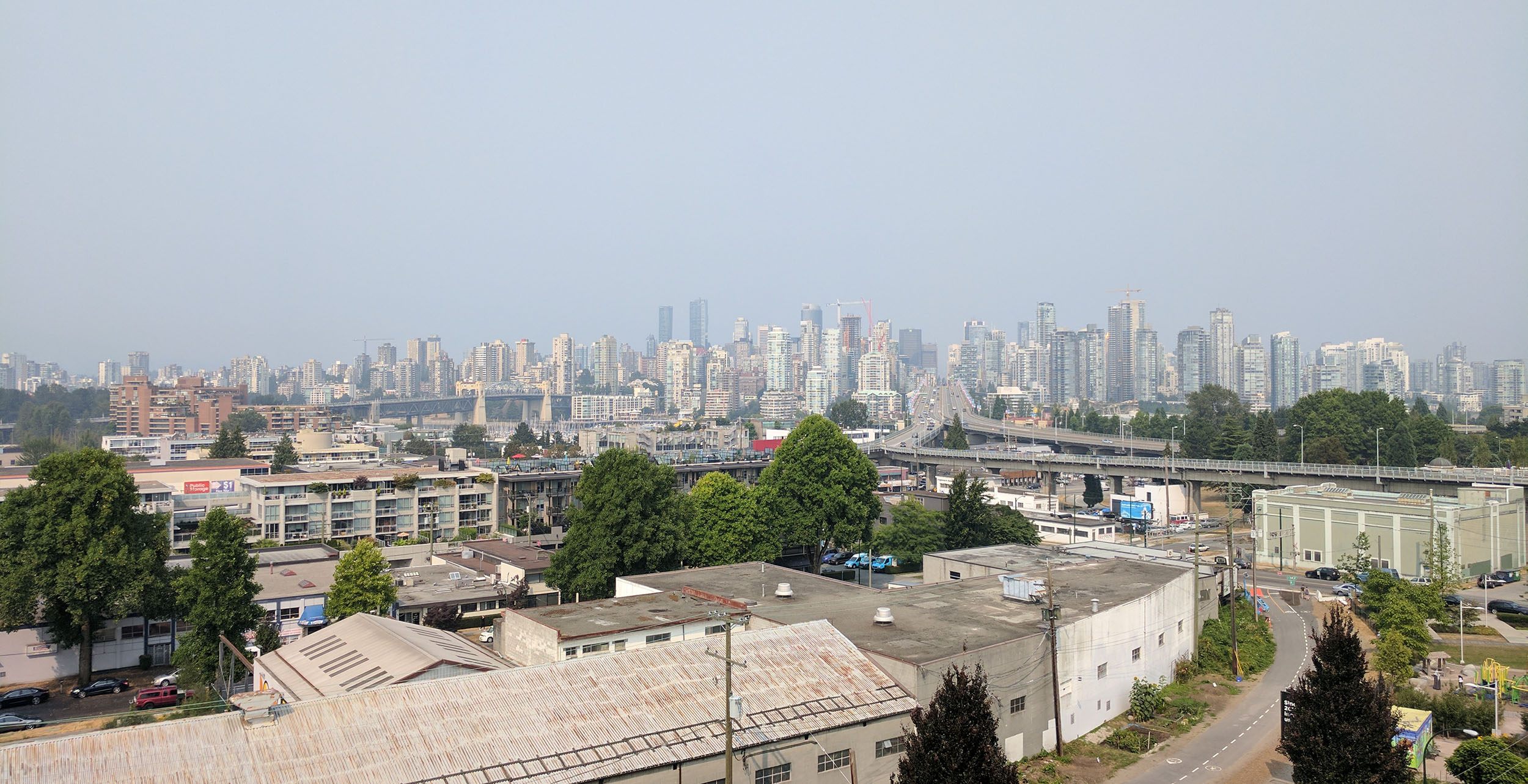 The smoky haze engulfing Vancouver, blown over from the wildfires raging in the Interior, could become a normal occurrence, according to one expert.

The haze is caused by a stable weather pattern over the BC Coast, allowing the winds to carry harmful fine particulate matter in the smoke over here.

The resulting Air Quality Advisory issued by Metro Vancouver some 10 days ago is still ongoing, making it the longest such advisory in the region’s history.

More recently, there was also a five-day air quality advisory issued in 2015, he said. Both in 2009 and 2015, the advisories were prompted by wildfire smoke.

“This is very much an anomalous situation, it’s an extreme event,” said Quan.

“Having said that, it does give us food for thought in terms of how to prepare for similar events going forward. They could become the new normal.”

“We’ve had two pretty significant wildfire summers in three years. This tells us we need to make sure our programs are ready to respond to them.”

‘The air mass is stagnant’

Although there’s not much that can be done to prevent smoke blowing into the region, Quan said they can try to make sure local pollution does not make it worse.

He says it would have been hard to predict such a ferocious wildfire season, given the flood risks, large snowpacks, and heavy rain seen in spring this year.

“But everything has dried out very, very quickly,” he said.

According to Cindy Uyu, a meterologist at Environment Canada, this kind of widespread smoke is very unusual, and is due to a ridge of high pressure.

‘We’re all looking for a change’

Uyu said the end of the smoky haze may be in sight with a trough of low pressure forecast to hit the BC coast later this week.

“Heading into this weekend, the wind will change… essentially working against the smoke and where the smoke comes from.”

“As early as Friday we’ll see that southwesterly wind push into the Lower Mainland and potentially drift some of that smoke back into the Interior.”

Uyu said the trough of low pressure may even bring rain, which will help push the fine particulates out of the air and down to the ground.

Quan says he’s hopeful of a “gradual” change over Friday and Saturday, but he doesn’t want to speculate on when the air quality advisory may be lifted.

“We don’t want to lift the advisory then go right back into it,” he said.

“We’ll be very, very cautious in terms of when to lift the advisory. We’ve got to make sure the air quality conditions are returning to normal levels.”

Uyu said she knows it is abnormal for Vancouverites to have hazy skies.

“We’re all looking for a change. There is some change on the way, so I guess just be patient.”

The smoky haze is made up of fine particulate matter, also known as PM2.5, that is airborne solid or liquid droplets with a diameter of 2.5 micrometres or less.

Exposure to this kind of matter is particularly a concern for infants, the elderly and those who have diabetes, and lung or heart disease.

However, at the time of writing, Canada’s Air Quality Health Index put Vancouver’s air quality at 7 – a high health risk that can affect everyone.

Vancouverites are therefore advised to avoid strenuous outdoor activities. Note that due to its small size, fine particulate matter can also easily get indoors.

If you do stay indoors to avoid the haze, make sure to keep cool with a fan or seek out air conditioned buildings, like the movie theatre or coffee shops.

If you are experiencing symptoms such as chest discomfort, shortness of breath, coughing or wheezing, follow the advice of your healthcare provider, says Environment Canada.