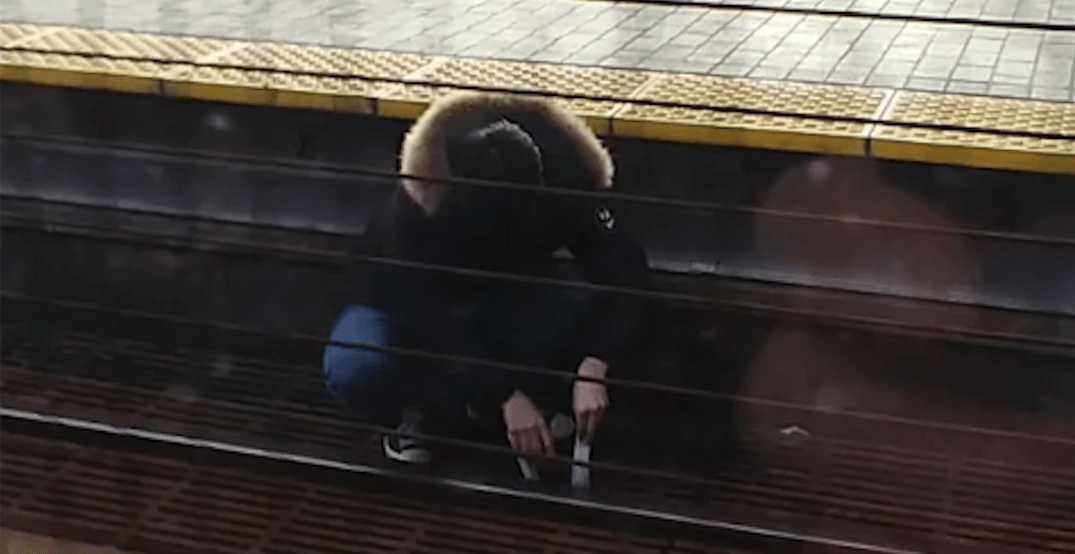 A photo that has recently surfaced online has also prompted a warning from Transit Police when it comes to unsafe behaviour around SkyTrain guideways.

The photo, posted to Reddit, shows a person who has entered the train guideway and appears to be looking for something, with the caption “Ever wonder why your sky train is held up.”

According to Transit Police spokesperson Clint Hampton, this is a bad idea for a number of reasons.

“That’s the line for the train to run through, so you have a train coming in at a high rate of speed,” he told Daily Hive.

Additionally, “there are live power rails, so if anybody was to get into the guideway and touch one of those power rails, there’s enough power going through those that [if] they weren’t killed, they would be seriously injured.”

The consequence of this action – besides the obvious — he added, is an $86 fine that can be levied against the person as well, if they are caught.

But for Hampton, “the real issue here is that people are putting themselves at extreme risk entering the guideway.”

Hampton said that if someone drops something into the guideway, the last thing they should do is try to retrieve it themselves.

Rather, the best plan is to use the emergency phone at the stations to let SkyTrain control of the situation, or if there’s an attendant, or transit officer nearby, to  let them of the situation.

“Just notify somebody and then that person can make sure that the power is shut off properly,” he said. At that point, the authorized transit official can enter the guideway safely and retrieve the item.