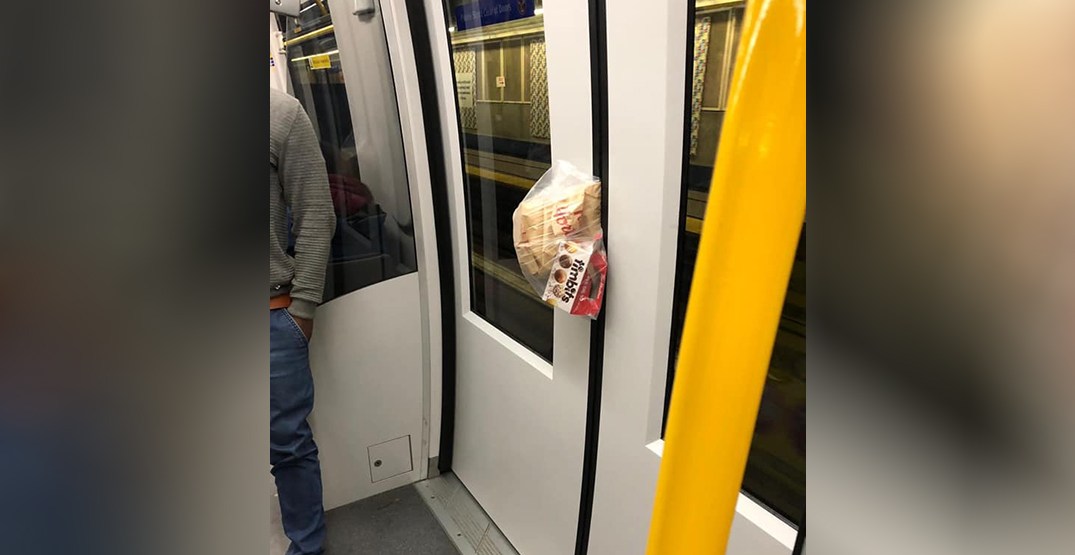 Who knew you would need a public service announcement for this scenario while riding SkyTrain?

TransLink posted a photo this afternoon onto its Facebook of a Tim Hortons bag, containing TimBits and other treats, stuck between the closed doors of a SkyTrain car.

According to the public transit authority, at 6:50 pm Thursday on the platform of Granville Station in downtown Vancouver, someone tried to keep the doors of a departing train open by throwing their bag of Tim Hortons at the doors.

Their bag of food made it through, although barely. The individual did not.

Needless to say they failed, with TransLink’s social media gurus highlighting the fact that the train doors do not work like an elevator.

“A reminder to both Tim’s and non-Tim’s carrying customers: We want you to have a safe and pleasant journey. That means take it slow, don’t run for the train (another is coming soon!), hold on, and follow transit etiquette because safety is fundamental — and it starts with you,” TransLink staff wrote on their lighthearted post.

The virality of photo makes for the perfect PSA, albeit certainly unplanned, coinciding with TransLink’s recently-launched public safety campaign of reducing preventable passenger injuries from slips and falls while riding public transit, such as from running to catch a bus or train, and not holding on while in a moving vehicle.