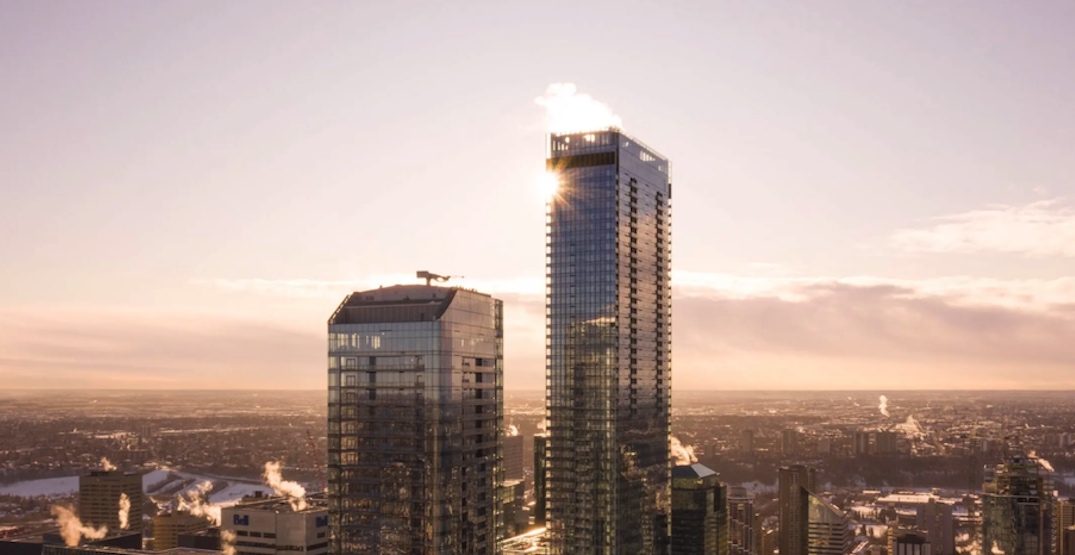 A total of 168 luxury condominium homes within the new ICE District in downtown Edmonton have been converted into rental housing, reflecting the shifting housing market conditions exacerbated by COVID-19.

Floors 31 to 42 of the Sky Residences within the condominium levels of the Stantec Tower are now the Sky Signature Suites.

Due to poor sales before the pandemic, the 12 floors that have become Sky Signature Suites were previously announced in November 2019 to become the ICE District’s second hotel. At the time, those who already purchased a condominium within one of the 12 floors were moved to a unit within the upper floors of the tower at no additional cost.

“We have been monitoring the downtown real estate market closely as we develop the ICE District. COVID-19 has had an impact on consumer trends and consumer habits,” Tim Shipton, the spokesperson for ICE District, told Daily Hive Urbanized.

“We saw increasing demand for rental space and felt we could convert some of our SKY condominiums to rental units. The rental strategy is a longer term path to purchase strategy and provides us the ability to show people the great amenities of SKY and ICE District.” 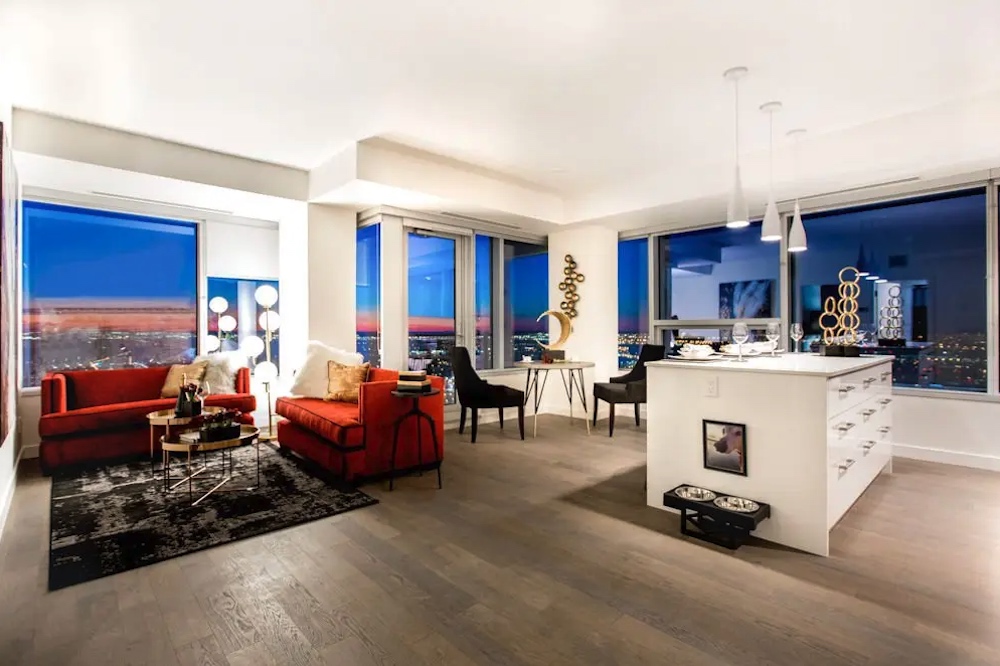 This mixed-use tower, reaching a height of 823 ft with its 66 storeys, is the pinnacle of not only Edmonton but also the tallest building in Western Canada.

The rental homes carry the same luxurious features as the ownership homes, and renters will have the same access to the building’s amenities.

The building has 20,000 sq. ft. of amenities, including a rooftop terrace, infrared sauna, fitness facilities, and Edmonton’s first golf simulator within a condominium property. Residents will also have access to services from the JW Marriott Edmonton hotel.

Shipton says while the tower’s homes were not used for Edmonton’s recent NHL hub city role, the property manager is looking to offer the rental homes for the Edmonton Oilers’ upcoming season. 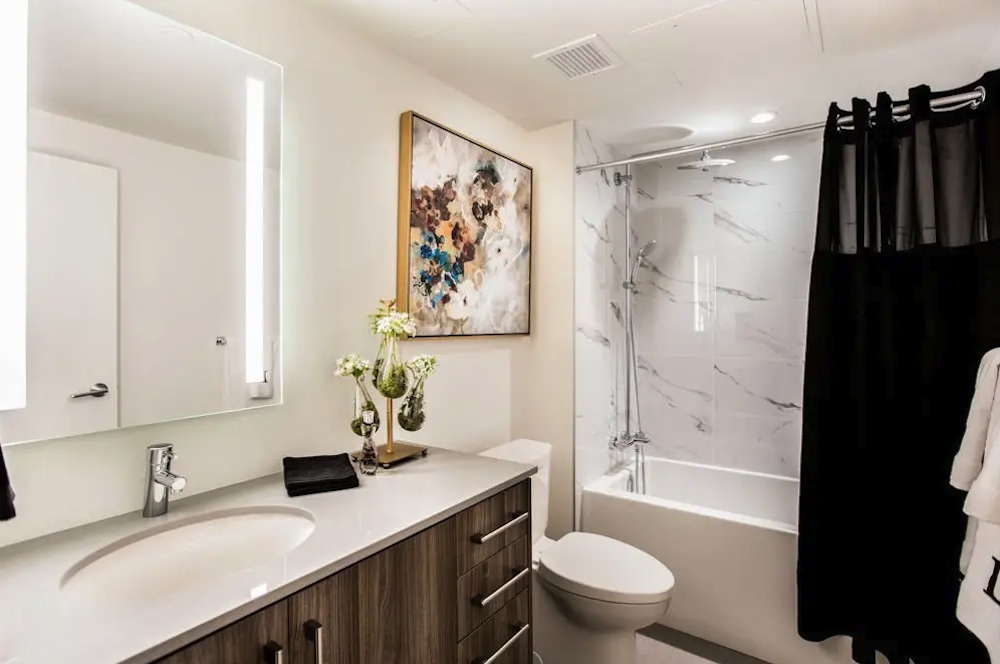 Stantec Tower reached completion in 2019, and it contains about 650,000 sq. ft. of office  and 62,000 sq. ft. of retail within the lower levels, below the residential floors. The tower’s total floor area is 1.3 million sq. ft., and it has earned the LEED Gold green building rating.

The tower is designed by Stantec Architecture, which has its headquarters occupying a portion of the office space, and jointly developed by ONE Properties and Katz Group Properties.

But the centrepiece of the ICE District is, of course, Rogers Place — the 2016-built indoor arena that is the new home of the Edmonton Oilers. The 45,000-sq-ft indoor Ford Hall public space and 1,000-seat community arena are attached to the stadium.

This new entertainment and sports district development for Edmonton also includes the Grand Villa Casino Edmonton, which has 600 slot machines, 28 table games, and three restaurants within its 60,000 sq. ft. space., as well as a future 22,000-sq-ft Loblaws CityMarket grocery store. 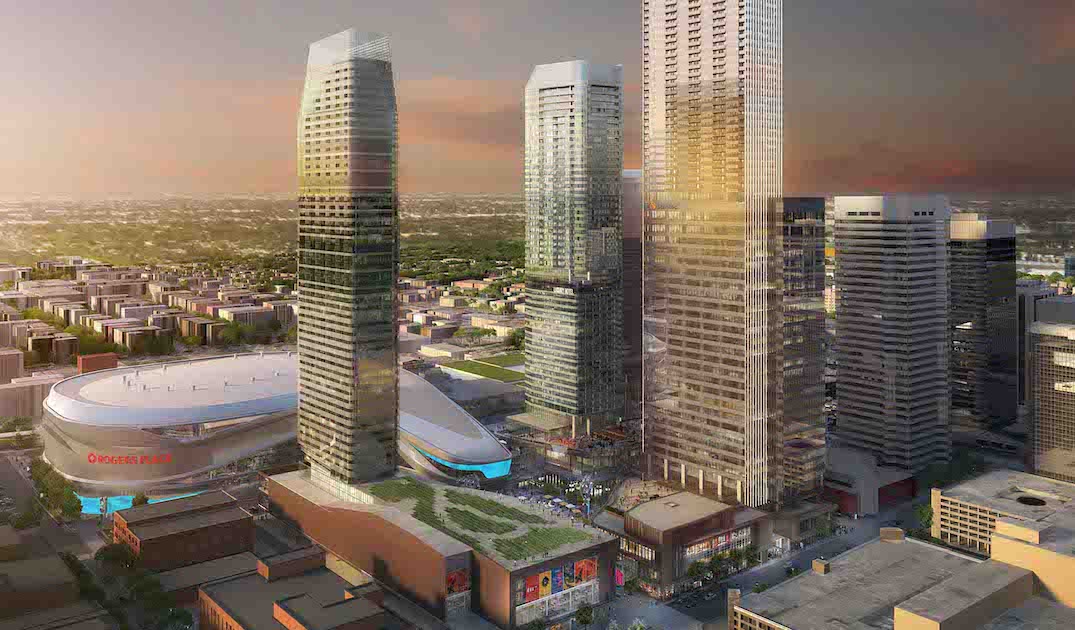 A large 50,000-sq-ft public plaza doubles as an outdoor public ice skating rink during the winter.