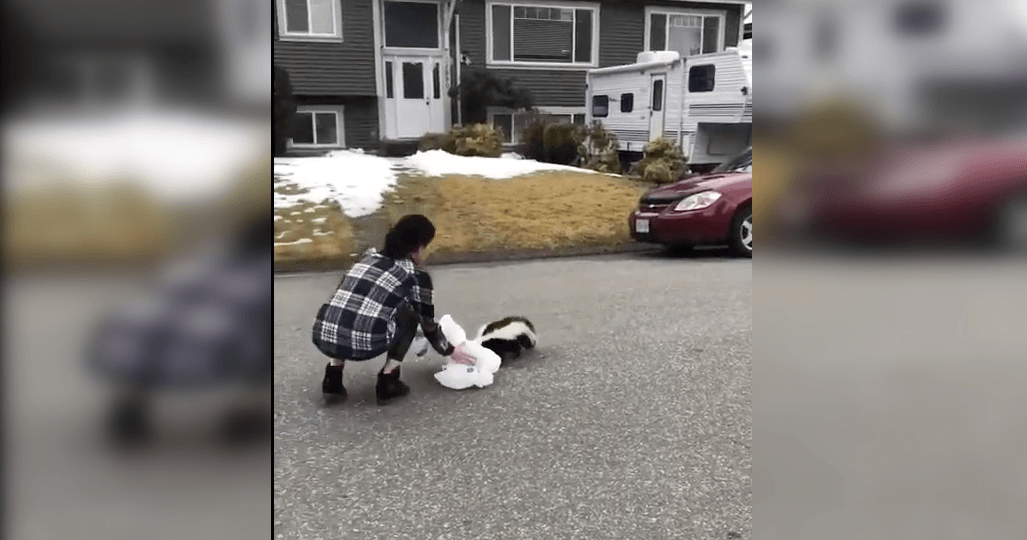 An extremely brave woman who sprang into action when she spotted a skunk with its head stuck inside a tiny cup is being honoured for her kind deed.

Mission, BC resident Tanya Krasuin rushed to help the frantic animal outside her home, after it somehow managed to get its noggin lodged inside a take-out plastic Burger King cup.

The entire ordeal was captured on video.

Using a plastic bag on her hand to protect herself from potential spray, Krasuin tugged at the cup multiple times until the skunk was able to pull free and run to safety.

She says that since the incident, which happened last March, many people have asked her if she was afraid of being blasted with its noxious-smelling oil.

“No! I did what I had to do to save an animal from suffocating,” she said, in a statement.

“I think any person would do the same.”

Colleen O’Brien, vice president of the animal welfare activism agency, says that if she hadn’t intervened, the skunk “could have easily experienced a miserable death by starvation, dehydration, or being hit by a car.”

It is hoped the story will inspire people to always come to the aid of animals in need — and always crush cups and cans before throwing them in the garbage.

Krasuin has just been given a Compassionate Action Award by PETA, and will receive a framed certificate and a box of cookies (vegan, naturally).

Former recipients of the award include a waitress at a waterfront restaurant who saved a dog who was thrown off a bridge into the water, and several NFL players who made the decision to donate their brains to science to study head trauma — with the end result being those tests would no longer be done on primates.