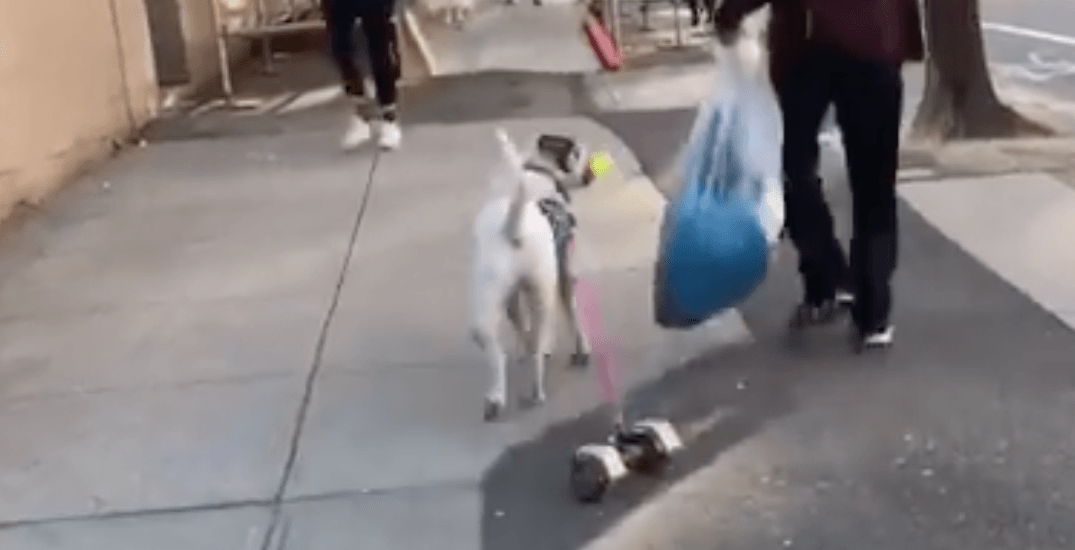 A Vancouver police investigation into a dog dragging a heavy dumbbell down the street in Gastown has concluded with the determination the owner is not breaking the law.

A video posted on social media on Monday showed the large breed dog walking down the road with a large weight tied to the end of its leash.

“This is abuse,” wrote Lisa Rossington. The Twitter message was shared widely, with many people chiming in that they felt the animal was being mistreated.

Sgt. Jason Robillard said investigating officers spoke with the dog’s owner and determined the pup was “in good spirits and healthy and there were no obvious signs of abuse.”

They did, however, seize the dumbbell before the owner was “allowed to go on his way with his dog.”

BC SPCA senior protection officer Eileen Drever viewed the video and sought the opinion of their expert in behaviour and welfare.

Dr. Karen van Haaften noted that “the harness is not padded or fitted properly and the dog appears to be pulling the weight from the side,” however she stated “the dog did not appear to be in distress.”

Guy at Abbott & Pender #Vancouver forcing his dog to drag a dumbbell down the street. This is abuse. Thank you to the ⁦@VancouverPD⁩ and Const. Courtney for handling this in such a professional and patient manner ⁦@ChiefPalmer⁩ ⁦@BC_SPCA⁩ ⁦@CityNewsVAN⁩ pic.twitter.com/3hpLpJC8E2