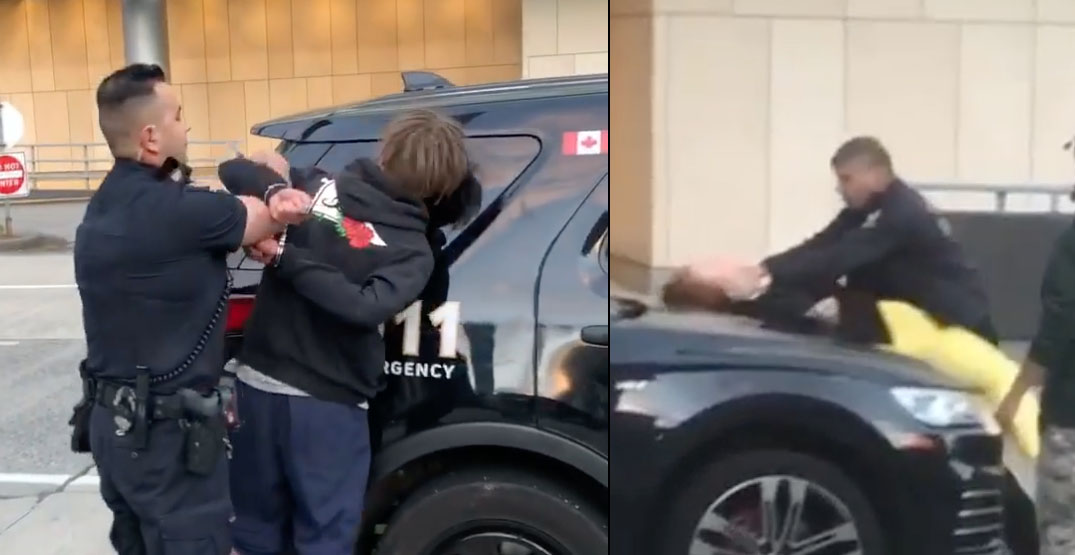 VPD officers restrained three people and took one of them to jail at Robson Square on May 22, 2020. (Serenity Lovita/Facebook and courtesy of Brandon Kautzman)

Vancouver police officers restrained three young people in front of the Vancouver Art Gallery Friday evening, and video that emerged from the altercation had some people questioning the use of force.

Police say a group of people were drinking in public around 8:30 pm in Robson Square, and became confrontational when officers asked them to dispose of the alcohol.

“This then led to the a member of the group physically fighting with police,” Vancouver Police Department spokesperson Const. Tania Visintin told Daily Hive.

One person was taken to jail because he was in possession of a knife, which a court order forbids him from having, Visintin said.

In video shared by Serenity Lovita on Facebook, an officer is shown handcuffing a boy in a black hoodie and then lifting his shoulder while his arms are behind his back — a motion that’s painful for him, the boy cries out several times.

The videos of the heated exchange may be disturbing for some to watch.

Visintin would not say whether the arrested individual was a minor, saying she could not “give out personal information until Crown Counsel approves charges.”

A group of people gathered around the officers as they arrested the boy, and several became confrontational, demanding to know why police were arresting him. In a video captured a few moments later by witness Brandon Kautzman, officers restrain a second boy in a blue sweater after he spits in the officer’s direction.

After the second boy is restrained, a girl becomes upset and shoves a police officer. Kautzman’s video shows the officer responding by grabbing her hair and throwing her to the ground. Next, the officer slams her against the hood of a cop car, and holds her there by her neck.

It appears the girl was eventually released since police said only one male from the scene was taken to jail.

Several skateboards were visible in the videos as the officers restrained the people, and some on social media wondered if the youth were arrested for skateboarding while the city’s skate parks are closed due to the pandemic. Kautzman said the skateboards didn’t have anything to do with the altercation.

“This incident wasn’t cops versus skaters,” he told Daily Hive. “They were trying to crack down on the drinking and let us continue skating after.”

He added the group appeared to provoke the officers by yelling and spitting at them.

Kautzman was skateboarding with friends in Robson Square at the same time the larger group of about 15 people were sitting on the stairs drinking.

Kautzman and his friends had a few beers on them as well, and he said officers told them to put the cans away. He thought it was generous of the officers not to give them a ticket or make them pour the beer out.