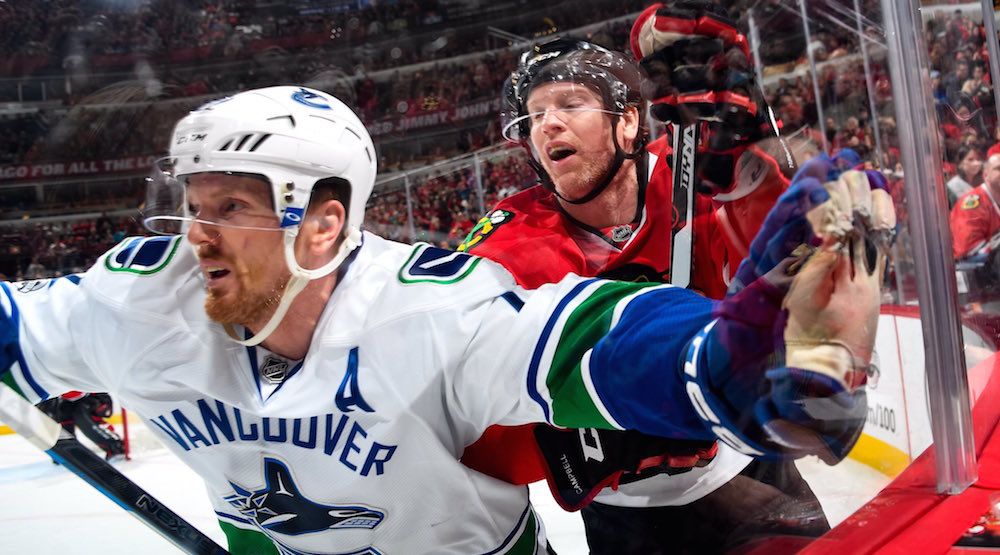 This game could be a microcosm of Vancouver’s season.

They were in the hunt for a brief stretch.

Then they went away.

That’s what happened in the game – Chicago took a 2-0 lead in the first, Vancouver tied it up with 2 goals in a 39-second stretch in the third, then Chicago scored the game winner with a minute and a half left.

Who knows, maybe the Canucks make the playoffs and this whole microcosm thing is a figment of my imagination.

At least half of you hope that’s true, right? Right??

It had its moments, though, and we’ll get into those now. The Blackhawks won the game 4-2. Here is your SixPack.

1. Not a great start

Shot attempts were 23-16 Chicago in the first period, but those numbers flattered the Canucks. Vancouver looked slower and sloppier, and they had trouble creating chances while the Blackhawks had no trouble at all.

Speaking of sloppy, this is the play that led to Chicago’s second goal.

No doubt Sbisa’s come a long way this year and with his constantly positive attitude it’s hard to rag on him as much, but this was a bad play.

Need to clear the puck? Maybe don’t whack it towards both Toews and Kane, when the other way is clear? I’ve heard they’re pretty good at hockey (and by that I mean I’ve watched them terrorize this team for years and years).

Oh well. For the most part, he’s been more confident and made better decisions with the puck this season… but you’ll never get the pizza delivery man out of Sbisa. It’s just who he is.

Here are the two goals that Chicago scored for the 2-0 lead. First, Panik.

Then Kane (after Sbisa gave him the puck).

2. Keep your chin up

Even strength shot attempts through the second and third periods were 22-17 Vancouver, and although that can be chalked up to score effects, it was a good effort from a team that was nowhere near as good as the one on the other side.

If you’re feeling down because they lost despite giving it everything they had, watch this Horvat goal that tied up the game.

The SixPack wouldn’t seem right without a section on Vancouver’s power play, right?

But I have to warn you, this one isn’t like the others. Why? They scored and they had some good chances. Seriously.

Before I get to those, did you catch Jim Benning on the radio Thursday talking about Vancouver’s power play?

“That’s an area we talk about every day…

I think Willie’s talking about making some changes in the personnel on the different units and he’s doing everything he can to try to figure it out.”

Just last week Willie told the media he’s going to stick with the personnel on the power play because they’ve scored in the past and he trusts they’ll score again.

Now for Sunday’s power play personnel update: it didn’t change at all.

Let’s give a little credit where it’s due, though. As discussed extensively in the SixPack, Sutter’s move away from the net-front position was long overdue. It’s already helping too, as they had this chance on a first period power play.

In the third period, Vancouver’s power play actually scored too.

It wasn’t exactly a cannon of a shot, but who knows, perhaps the threat of the left-side shot had Chicago’s PK not expecting Stecher to shoot every time he has the puck.

4. The nail in the coffin

Here’s the goal that ended Vancouver’s hopes of another one-point game.

What do you think of the goal, Miller?

#Canucks Miller on bad bounce “first flat puck all night. This ice is the worst ice I’ve seen in my career.” Not thrilled with United Center

Was it a bad bounce, though? Could Panik have meant to shoot wide? If so, it was a hell of a play.

You’ve probably noticed the Canucks have been snagging points from many of their recent games, and they’re now in the hunt for a playoff spot.

And boy, it sure doesn’t take much to get fans thinking a Cup run is possible.

@_MeanCanuck @omarcanuck If the Canucks ride their goalie (Miller/Markstrom/Demko) and their defense to a Cup, I will die a happy man…

Remember that microcosm I warned you about?

This one from the photoshap contest Friday night made me laugh.

First, hopefully this is no cause for concern, but Edler fell on his wrist and stayed down for longer than normal on this play.

Second, I bring you Stecher being Stecher. He fans on the shot at the start of this gif – it happens. The great thing is how he straps on his short-track speed skates, gets back, and eventually strips Hinostroza of the puck, nullifying any threat his missed shot could’ve caused.

Third, I didn’t get to do Friday’s SixPack and sing the praises of the Sedins as Hank notched his 1000th point – and I don’t mind because Wyatt did an incredible job. There will be more milestones and chances to write about how amazing the Sedins have been.

For now, this Mark Crawford quote from Ed Willes’ article in the Province just popped out at me.

“I’ve been around all (the Canucks’ great captains): Steamer (Stan Smyl), Trevor (Linden), Markus (Naslund). I think Henrik is the greatest leader.”

Note: Thanks to Ryan Biech for always helping with the gifs in the SixPack