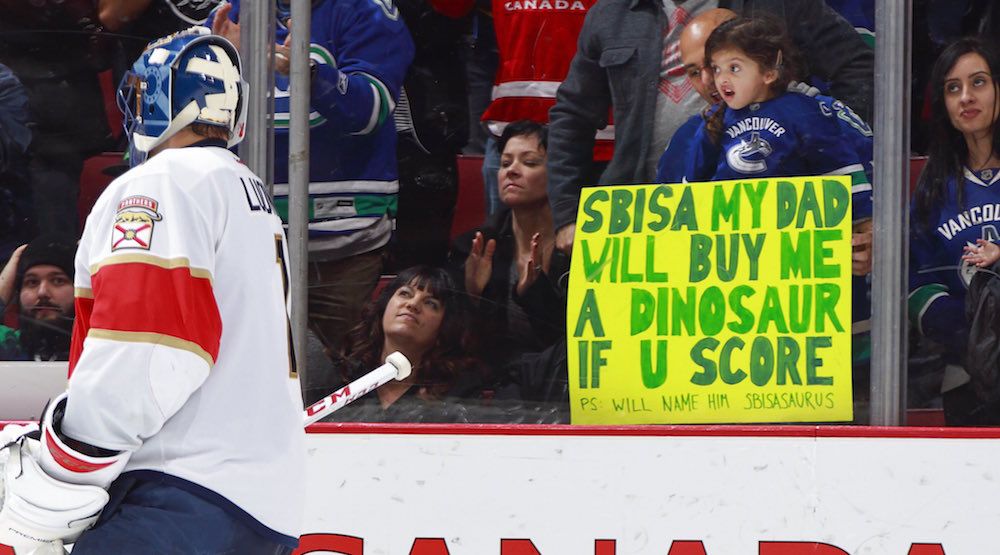 Time to pay up, dad.

Sixteen days after Bo Horvat scored a wiener dog for six-year-old Canucks fan Adley, another youngster is waiting for a new pet.

Robby thought he was safe arriving to Rogers Arena with his two-year-old daughter Arya and a sign that read “SBISA MY DAD WILL BUY ME A DINOSAUR IF U SCORE PS WILL NAME HIM SBISASAURUS.”

After all, Canucks defenceman Luca Sbisa doesn’t score a lot of goals. In 429 games, Sbisa had just 15. He notched just two goals last year and had just one this season.

“I told Arya that she would get a dinosaur if Sbisa scored,” Robby told Daily Hive. “Dinosaurs are hard to come by so I figured I’d be safe choosing Sbisa.”

Well of course, as luck would have it, Sbisa stepped up in the third period and ripped home the game winning goal past Florida Panthers goalie Roberto Luongo.

“We were sitting right behind Luongo in row 1 so when Sbisa picked up the puck, I was like no way this happens,” Robby said. “There was room above Luongo’s glove and that’s where Sbisa went. I pulled out my phone as soon as the puck went to Sbisa and was able to grab a picture.”

Here’s the picture he snapped: 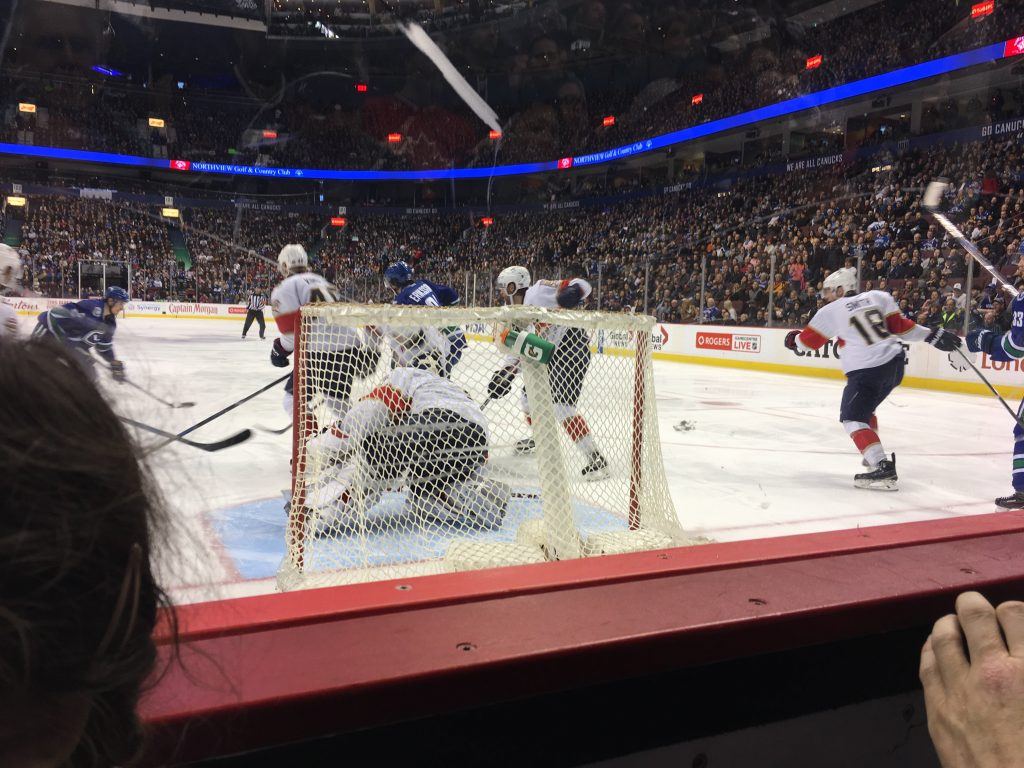 Arya turns just three years-old next month, so you’d have to wonder if there a chance she’d forget about the deal by Saturday. Well…

“She said ‘dadda, dinosaur’ and I was lost for words. I figured she would forget, but first thing she says when she wakes up the following day was ‘dadda where’s my dinosaur.'”

Arya’s become a bit of a good luck charm for the Canucks. Not only did Sbisa score on Friday, but the Canucks won and Henrik Sedin scored his 1000th point. The last game she went to was last year when Radim Vrbata scored a hat trick. After the game, Vrbata gave her his stick.

“Now she believes going to a Canucks game comes with a neat prize. A Vrbata hat trick stick was a nice get, but a dinosaur surely trumps that.”

Dinosaurs are extinct so…

“My only hope I guess is if Jacob Markstrom is willing to suit up in that dinosaur costume and drop her a visit. I don’t know how much he would like living in our backyard though.”

Find out which Canuck wore a 7ft inflatable dinosaur costume for #HockeyHalloween to try and scare the pants of his teammates. pic.twitter.com/Kdq2YJC4fI