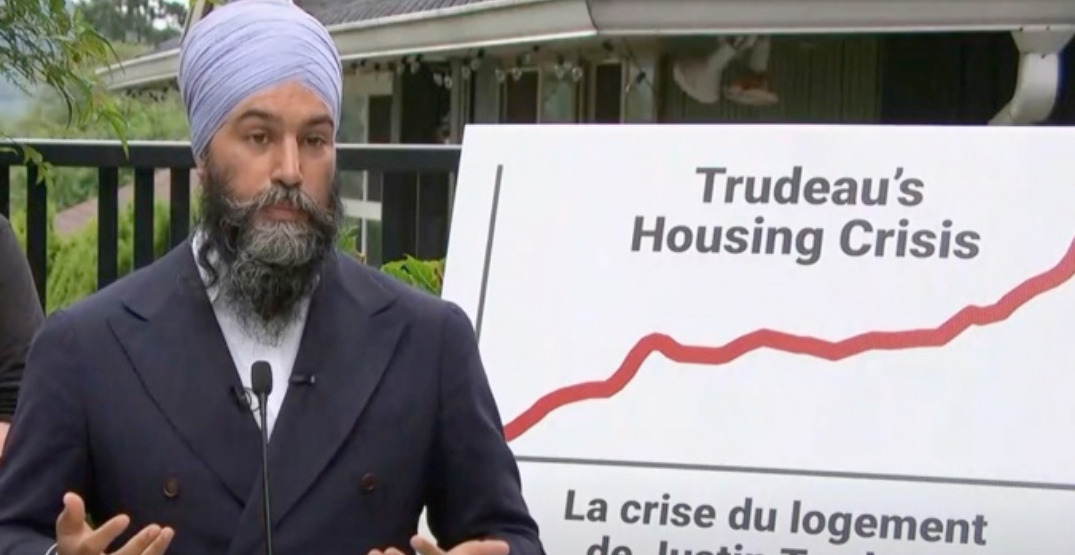 NDP Leader Jagmeet Singh is pitching a 20% foreign homebuyers’ tax in a bid to capture votes in Metro Vancouver ridings where the cost of housing has skyrocketed beyond the reach of many middle-income families.

Speaking in Burnaby, BC, on Wednesday, Singh said the tax would apply to the sale of homes to individuals who are not Canadian citizens or permanent residents.

The promise mirrors one he made in the 2019 election and comes after the Liberal government proposed a one-per-cent annual tax on the value of homes owned by non-residents in its spring budget.

British Columbia already has a 20% tax on the purchase of homes by foreigners in several parts of the province. Though it had a short-term cooling effect when first introduced at 15% on Metro Vancouver homes in 2016, prices have continued to climb.

Singh also promised an NDP government would build 500,000 affordable homes in 10 years and would target money laundering and organized crime in the housing sector by making it harder to hide behind nameless companies and giving regulators more teeth.

The NDP leader placed the blame for housing prices squarely on Justin Trudeau, who also campaigned in BC on Wednesday. Singh accused the Liberal leader of allowing rents to rise and housing prices to balloon by more than 20% in less than a year in Vancouver.

“Over the past six years, things have just gotten so much worse. People cannot find a home that’s in their budget,” said Singh, who was joined by a young couple who have struggled to find housing.

“One of the big reasons why this is happening is because Justin Trudeau has let this happen.”

He framed the election as a choice between the Liberals allowing “rich investors” to be the priority and New Democrats who are going to take “big money” out of housing, so people aren’t competing with corporations.

The Liberal government kicked off a 10-year, multibillion-dollar national housing strategy in 2018-19. The parliamentary budget officer recently found program delays at the Canada Mortgage and Housing Corporation, expired community housing deals with the provinces and a shift toward more expensive affordable homes have limited the impact of the strategy.

Singh, the incumbent candidate in Burnaby South, sidestepped questions about the location he chose for Wednesday’s announcement. He stood in front of a house valued at about $2 million, with a sign behind him that said, “Trudeau’s housing crisis.”

Asked why he was pitching a one-time tax on the purchase of foreign homes rather than an annual tax on the value of homes, as the Liberals have proposed, Singh said the goal wasn’t to create a revenue stream but rather to discourage foreign investors from buying Canadian housing.