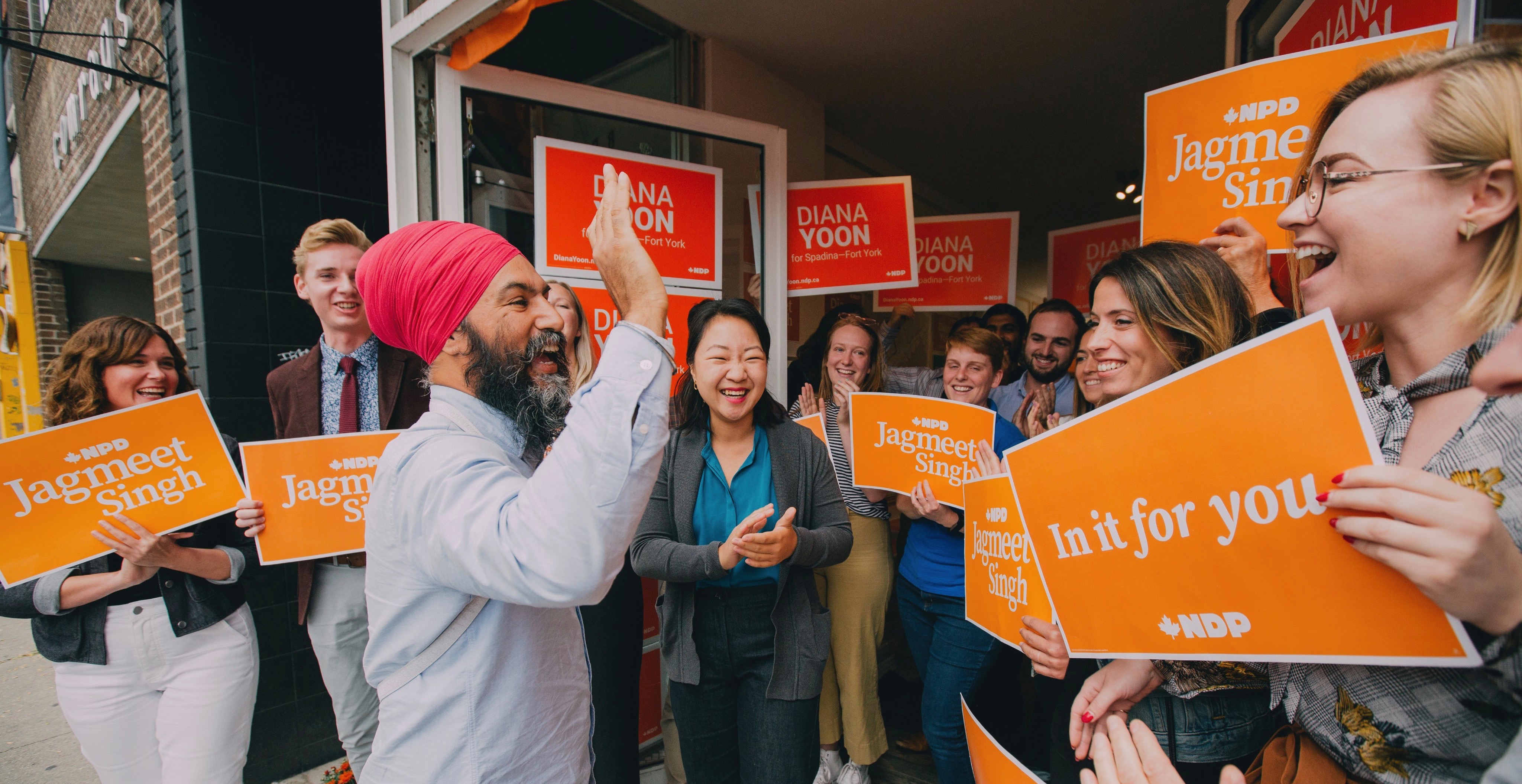 Written for The Canadian Press by By Teresa Wright.

Jagmeet Singh won’t be the Canada’s next prime minister but he might have earned himself and his fellow New Democrats the next best thing: a key role in shaping the direction of Justin Trudeau’s Liberal minority.

The NDP leader led a loose, largely error-free campaign that received a surge of momentum late in the 40-day race, although the party couldn’t turn it into seat gains.

But Singh is vowing his party will play a constructive role in the new Parliament that Canadians have chosen, a message he also delivered to Liberal Leader Justin Trudeau in a phone call Monday night.

“Throughout this campaign we heard a lot of stories from Canadians and about Canadians who are struggling, and just want to build a good life but are finding it harder and harder to do so,” he said.

“To those Canadians I want to say this to you tonight: New Democrats are going to Ottawa to fight for you.”

In a speech that touched on many of the issues and promises he raised during the campaign, Singh highlighted Grassy Narrows First Nation as an example of the work the federal government still must do on Indigenous issues.

His party won 24 seats in the election, as the count stood early Tuesday, fewer than the 39 the NDP had going into the election and falling to fourth place in the House of Commons behind the Liberals, Conservatives, and Bloc Quebecois.

Singh acknowledged the results were not what the party wanted in Quebec, with the NDP keeping only one seat in the province as 2011’s orange wave finally went out, but Singh promised not to abandon the province or its people.

But no matter what, the real winner in this election “will be the people,” he said.

The mood at the NDP leader’s results-watching party began was tense early in the evening, with supporters trickling in and staying anxiously silent as television screens declared a Liberal minority.

But things became highly celebratory by the end of the evening. Party insiders explained that although the party has been reduced to fourth-party status, the NDP now wields more power than it did before.

Just how the NDP plans to work with the Liberals remains unclear, but Singh laid out his early priorities in his speech Monday night: a national, universal, single-payer pharmacare system; greater access to affordable housing; lower cell phone bills; and a plan to make higher-income earners “pay their fair share.”

The crowd in Burnaby erupted over this, chanting “tax the rich” in rhythm.

Singh — who took over the party in 2017 after a devastating defeat two years earlier, its fortunes looking as grim as they ever have — has given the party a base from which to grow, re-elected BC NDP MP Jenny Kwan said to cheers.

“He has laid a fresh foundation for the NDP and that foundation is young and engaged, so the future is looking very bright.”

Singh had begun the day in high spirits, visiting his Burnaby campaign office to thank volunteers and deliver boxes of doughnuts and a bag of oranges — a nod to the party’s team colours.

He said he has no regrets about the race because he feels he ran a campaign that was true to who he is as a person, one that relayed a message of hope.

The NDP began the race in a distant third place, but began gaining traction as the campaign unfolded, drawing crowds of more than 1,500 people to Singh’s rallies in the final days of the race.

Nonetheless, organizers were still claiming victory, celebrating Singh’s emergence as a popular leader who was able to draw huge crowds by the end of the campaign.

The NDP leader spent the week leading up to election night focused on trying to shore up votes in three provinces the party believed would offer the best potential for a breakthrough: Quebec, Ontario and British Columbia.

As a result, he had to fend off questions about whether he was ignoring parts of the country.

Singh said he was sorry he couldn’t visit all parts of the country — notably Newfoundland and Labrador, PEI and the North. He tried to make the argument he would represent all voters in Canada, no matter where they live, even if he didn’t have a chance to shake hands with them or pose for photos.

It didn’t appear to have hurt the party’s fortunes in Newfoundland, where Jack Harris, who held the seat of St. John’s East for the NDP from 2008 to 2015, made a comeback Monday, defeating Liberal incumbent Nick Whalen.

But all the extra time Singh and his team spent appealing for votes in the 905 region outside of Toronto did not translate into any electoral gains for the New Democrats in those ridings.

Marie Della Mattia, Singh’s campaign co-chair and top political adviser on the tour, said the party’s strategy was simple: build on strengths like incumbent candidates and the NDP brand, then identify and appeal to people open to voting NDP.

Della Mattia said Singh didn’t change anything about the way he was campaigning, but rather it was the focused attention of the national media that shifted things for the NDP leader. The real tipping point came with Singh’s reaction to the bombshell release of Liberal Leader Justin Trudeau’s blackface photos, Della Mattia said.

“My perception of this campaign is that we did all we could. We did everything that we could to position ourselves well, to show off the leader with his biggest strengths,” Della Mattia said.

“From the events that we picked and the places that we went and the stories that we told we saw opportunities and we were able to find those moments where he could really shine.”

As for what will happen next, Singh is to hold a press conference on Tuesday at 9 a.m. in B.C. where he is expected to provide some more details.