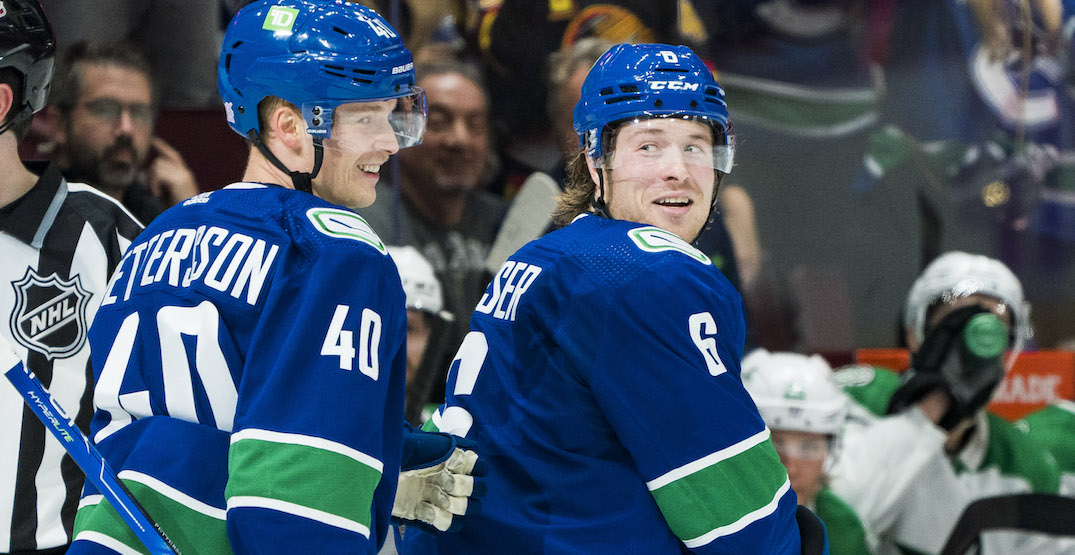 On too many nights this season, special teams has killed the Vancouver Canucks’ chances of winning hockey games.

That was certainly true on Friday, when the Canucks went 0-for-5 and generated very little in terms of chances on the power play while giving up two goals on three chances to the Nashville Predators on the penalty kill.

While the PK is still a big problem, on Sunday night, all their power play problems seemed to wash away. The Canucks went 3-for-6 with the man advantage against the Dallas Stars.

The Canucks scored at least three power play goals in one game just once last season and four times in 2019-20.

With an 18.4% rate, Vancouver now ranks 20th in the NHL on the power play. To make the playoffs, the Canucks will likely need a top 10 power play — especially if their league-worst penalty kill (63.9%) continues to sputter.

So what did they do to fix things? Well, hockey is not rocket science, and it turns out, that includes the power play.

Here are four simple things the Canucks did to fix the power play.

1. Getting the right players on the ice

The definition of insanity is doing the same thing over and over and expecting different results.

With that in mind, you can understand why Canucks coaches shook up both of their power play units recently.

Friday’s top power unit didn’t feature Bo Horvat or Quinn Hughes, and it had J.T. Miller moved to the net front and Brock Boeser in the bumper spot.

The changes made things worse.

Hughes is tied for the most power play points among NHL defenceman over the last three seasons. Dropping him to the second unit, I’ll suggest, was not the answer.

The problem with the Canucks power play was never their personnel. It was their approach, which is why Travis Green and Jason King have been under fire of late.

On Sunday, the Canucks went back to the formation that’s been successful for them in the past, using their five best players — Hughes, Boeser, Horvat, Miller, and Elias Pettersson.

Something did need to change though.

The Canucks showed much more urgency with the man advantage, choosing to shoot sooner than they have in the past. On too many nights, Vancouver’s power play has looked for the perfect shot, forcing low-percentage passes rather than putting pucks on net.

That’s what Miller did on his first goal, scoring seven seconds into the power play from his familiar spot on the left flank.

Miller said after the game that he decided that he was going to shoot the puck right away prior to the start of the power play opportunity.

He told you at morning media special teams would get it done tonight 😉 pic.twitter.com/E2bQExn1r0

After the game, Pettersson admitted that teams had figured them out, so something needed to change.

“We had a good talk this morning, that everybody’s gotta be a shooter, simplify,” Pettersson said. “I think we just got to continue having that mentality, snapping it around quick, change positions. Be shooters.”

"I think today we flipped it and everybody was a shooter, we switched positions, and made it harder for their PK to read us – it gave us different looks."

The biggest problem the Canucks have had on the power play this season is their inability to throw different looks at their opponent. The scouting report is well known: Hughes passing to Pettersson for the one-timer from the right flank, and Miller or Boeser setting up Horvat for the one-timer from the bumper. Those have been effective set plays, but they’re not nearly as deadly when the other team knows it’s coming.

So the Canucks did something fans and media have been clamouring for. They moved around.

Pettersson scored a goal from Hughes’ spot on the point, and Miller scored from Pettersson’s spot on the right flank. That’s not where they started their shift, but it’s where they ended it.

Can we get a heck ya in the chat?! pic.twitter.com/aNrkbIPclz

“We didn’t want to be stagnant and robotic. We had to start throwing something in there. decided to throw a little more movement,” said Miller.

One of the reasons why the Canucks signed Alex Chiasson was for his work as a net-front presence on the power play. The Canucks talked themselves into this idea so much so that they were willing to bump Boeser to the second unit to make room for him.

On Sunday, Boeser staked his claim to that spot.

“Brock did a hell of a job on both first two goals screening,” said Miller.

“I just remember releasing the puck and all I saw was Brock, which is a good thing. He got out of the way and it was a textbook screen. I’m releasing it but if he doesn’t do that it’s a routine save for the goalie. He’s a big part of the first two goals.”

Pettersson’s goal was a wrist shot from the point that was perfectly placed, going post and in. It was a good shot, but that’s an easy save for the goalie if he can see it.

Anton Khudobin didn’t see it, of course, as Horvat and Boeser set up a double screen.

We’ll see if Sunday’s outburst is a sign of good things to come, or merely a blip on the radar. The Canucks can get back to a .500 record with a win at home on Tuesday against the Anaheim Ducks.