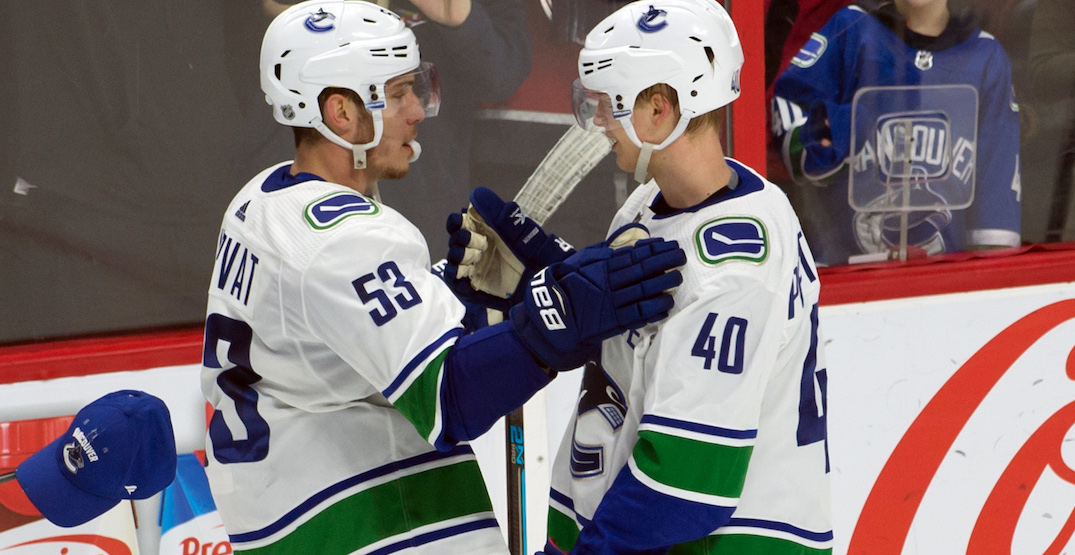 The Vancouver Canucks witnessed the competitive landscape of their division change on Thursday when the Vegas Golden Knights acquired Eichel from the Buffalo Sabres.

The disgruntled star’s move to the division should make Canucks fans wonder: where do Elias Pettersson and Bo Horvat fit among top centres in the Pacific?

Even though Pettersson’s struggles are well-documented, this ranking of Pacific Division centres will take into account the last three seasons, dating back to the beginning of 2019-20.

Sean Monahan’s stock has fallen drastically over the past three seasons. He posted 34 goals 82 points in 78 games back in 2018-19, but since then he’s failed to match that total over his last 129 games.

At 36 years old, Ryan Getzlaf’s best days are behind him, but he’s still got some gas left in the tank. The Anaheim Ducks captain only produced 17 points in 48 games last season, but is on a tear in the last month, posting 10 points in 11 games.

Unlike Monahan, Chandler Stephenson’s stock has been moving in the opposite direction. He leads the Vegas Golden Knights with 10 points. No other player on Vegas has more than six.

The 32-year-old has been a model of consistency for the Flames. Mikael Backlund is still a two-way force, and he’s had six straight seasons where he’s registered better than a half point per game.

Jared McCann has blossomed into a legitimate top-six centre. His 0.74 points-per-game last season (32 points in 43 games) was the best mark of his career. The former Canuck was leading the Kraken in points before being placed in COVID-19 protocol.

After starring for the Montreal Canadiens during their Stanley Cup Final run, Philip Danault has found a new home in Los Angeles. Despite mainly considered to be a defensive centre, his 2.13 points-per-60 at even strength since the beginning of 2019-20 is a bonafide first-line rate.

That’s the narrative behind Yanni Gourde’s career. He’s now Seattle’s first line pivot, where his 21:09 in average ice time per game is top-10 in the NHL among centremen.

It’s been a tough start to the season for “Wild Bill” William Karlsson. After posting just a goal and three points in his first eight games, the team announced this he will miss approximately six weeks with a broken foot.

Logan Couture’s point-per-game totals have dipped as talent on San Jose’s roster has been depleted in recent years. However, he’s off to a hot start this season with 10 points in nine games.

Bo Horvat is the Canucks’ version of “Mr. Consistency.” He’s a solid two-way centre who’s also blossomed into a scoring threat on the power play. Since the beginning of 2019-20, Horvat has averaged 26 goals and 59 points per season over a full 82 games.

Calgary’s issues with Monahan slipping have somewhat been masked by continued improvement from Elias Lindholm.

The 26-year-old has quietly blossomed into a star, and he’s off to a hot start this season with seven goals in his first 10 games.

Amidst all the recent losing in San Jose, burly Czech-centre Tomas Hertl has remained a model of consistency. He’s quietly averaged nearly a point per game since the beginning of 2019-20.

Although Anze Kopitar is in his 16th NHL season, he’s showing no signs of slowing down.

The 34-year-old is still one of the best two-way centres in hockey, and he continues to produce at a first line rate. As of writing, his 13 points are tied for third in the league, only trailing Connor McDavid and Leon Draisaitl.

Despite slow starts in each of the last two seasons, there should be little doubt in Elias Pettersson’s ability to be one of the best players in the league.

He’s earned the benefit of the doubt with his electric play since busting into the NHL with 10 goals in his first 10 games back in 2018-19. Pettersson also showed off his brilliance during the 2020 playoffs with 18 points in 17 contests.

The news about Eichel joining Vegas was good for nobody in the Pacific Division.

From the Canucks perspective, this will be another strong test in the years to come for someone like Pettersson. Can he be better than Eichel? The Canucks should hope so. During regular season action, the Canucks are 2-7-1 against Vegas with just one regulation win.

There’s no doubt that the next two guys on this list are miles ahead of everyone else.

In the race against McDavid for the Art Ross Trophy, Draisaitl has an early lead with 20 points in nine games.

Since the beginning of 2019-20, both McDavid and Draisaitl have registered more than 200 points.

The next closest player on the list? Brad Marchand, who has 168 points.

Edmonton is currently blessed with two of the best players in the NHL, although it hasn’t yet translated to playoff success.

Not included because they primarily play the wing: