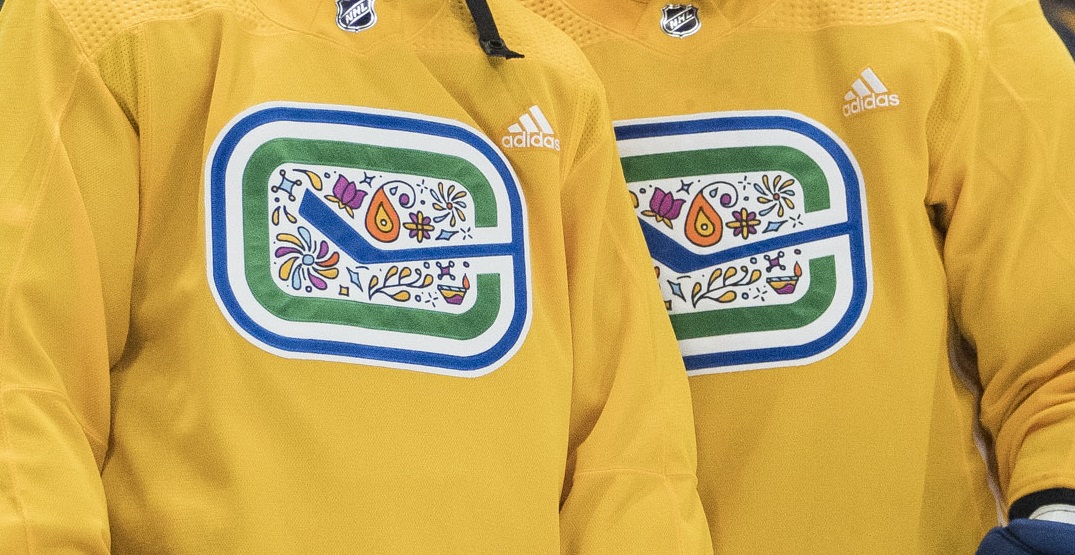 If you wanted to get your hands on a Vancouver Canucks Diwali jersey, well, let’s hope you were prepared to cough up a small fortune for it.

Prior to Friday’s Diwali night game against the Nashville Predators, the team rocked a special yellow jersey featuring the designs of local artist Jag Nagra.

“The main crest has been transformed into a special Diwali icon that incorporates the Canucks Stick in Rink logo stylized with iconography familiar with Diwali festivities including a diya (clay lamp), fireworks, lotus flower, stylized mustard plant and other South Asian motifs. The colours are reminiscent of the twinkling hues at dusk during these festivities and celebrations,” the Canucks explained in a media release.

The jerseys aren’t publicly available in stores, but the team was offering an auction through its Vanbase store until just past midnight for the actual uniforms worn by the players, which were then autographed. Limited quantities of the jerseys were available at Rogers Arena for purchase, with cresting available for player names in English, Punjabi, or Hindi.

Even Vancouver actor Seth Rogen wanted to get his hands on one.

Elias Pettersson’s Diwali jersey fetched the most, per the auction website, being sold off for a price of $4,925.  Thatcher Demko ($2,925), Quinn Hughes ($2,900), Bo Horvat ($2,853), and Brock Boeser ($2,525) were some of the other top earners. Partial proceeds from the auction were being donated to the Punjabi Market Regeneration Collective (PMRC).

For those looking for Diwali-themed merch, Vanbase does have a few options available for order and pre-order, including hoodies, t-shirts, mugs, lanyards, keychains, and pins.

Despite looking great in warmup, however, the Canucks were on the wrong side of the scoreboard on Friday, falling 3-2 to the Predators.