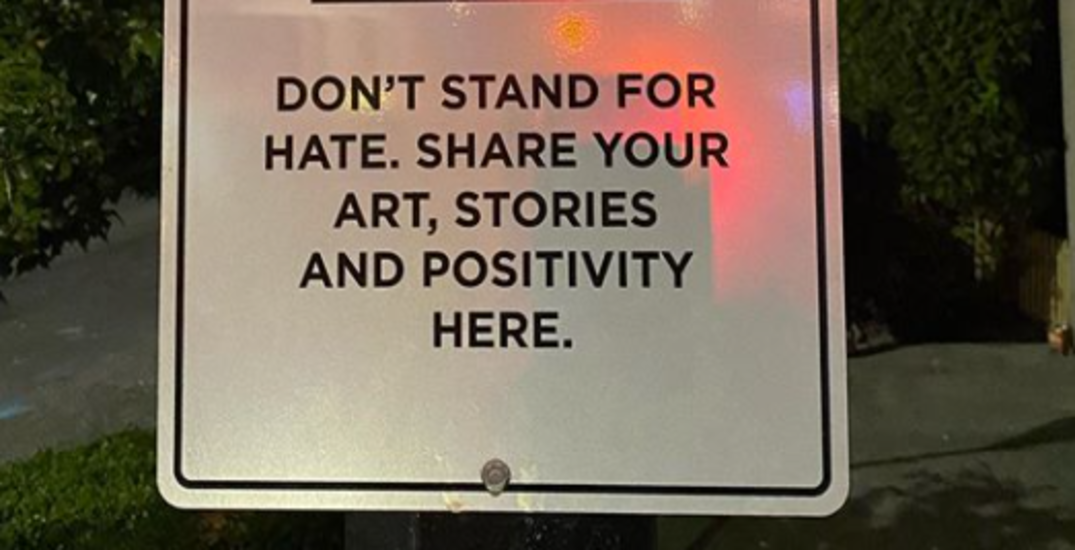 A new sign erected in Vancouver’s Davie Village asks people to “do better” and urges them to not “stand for hate.”

The installation comes just over a month after local radio producer Justin Morissette had his leg broken when he confronted a group broadcasting homophobic remarks through the city’s gay village. In November 2019, a man was left with life-altering brain injuries following an assault in the same area.

The sign at the corner of Davie Street and Thurlow Street resembles those placed by the city, and reads, “Violence to our friends, family, and neighbours happens here too. Don’t stand for hate. Share your art, stories and positivity here.”

The City of Vancouver emblem has been replaced by “Do Better Vancouver,” and a logo says it’s courtesy of the “Vancouver Department of Being a Decent Human Being.”

Here’s an installation we created to point out several terrible incidents that have happened in the Davie Village area of Vancouver. Over the past several years violent assaults have ruined the lives of our friends, families and neighbours. This is a monument to those tragedies and a call to people to share their positivity, art and stories. Most importantly, we want people to look out for each other. Thank you to @seensigns for helping us turn this weird idea into a real thing and to the various artists who have and will be placing art in the area. Please donate to the go fund me in our bio for Andrew Kurra who was assaulted and is now recovering. Please add your art to the pole. Artists featured here are @wkndsnack and @sasquatch_army #vancouver #streetart

The sign was installed by the Day0lds, a group that supports BIPOC & LGBTQ+ artists through the sale of T-shirts and stickers. The Day0lds created the sign with the help of Seen Signs in an effort to raise awareness of injustices that have taken place in the area.

“Over the past several years violent assaults have ruined the lives of our friends, families and neighbours. This is a monument to those tragedies,” the group wrote in an Instagram post.

The Day0lds want people to share their art and stories on the pole holding the sign, bringing positivity back to the neighbourhood in the process.

“Most importantly, we want people to look out for each other,” they say.