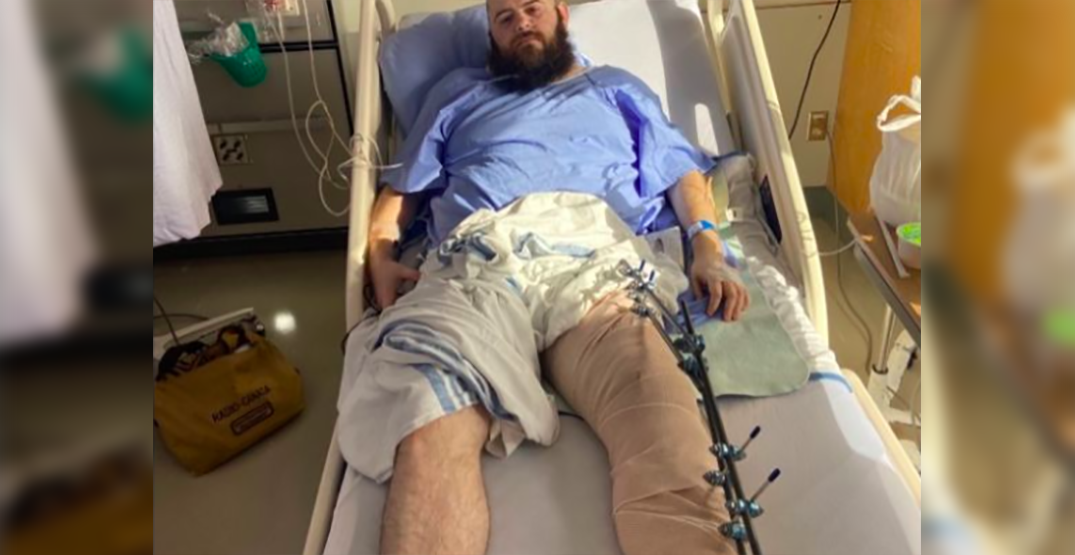 A Vancouver man is in the hospital after he says he was assaulted by a group associated with homophobic street demonstrations in his neighbourhood.

Justin Morissette, a producer with a local radio station, took to Twitter after he says a group of “anti-gay evangelical bullies” broke his leg in the city’s West End. By his account, he confronted the group that was broadcasting a message of intolerance over a loudspeaker.

In a GoFundMe set up by Morissette’s brother, it is alleged that this is the second time the demonstrations have set up a loudspeaker in the area this summer.

Vancouver police said they have been called to the area for four previous incidents of the group’s religious preaching. Officers reportedly did stay in the area to “keep the peace.”

“The group was asked to pack up their belongings and leave. At each incident they did do that,” a spokesperson told Daily Hive.

I’m only tweeting about this because there have been too many instances of unchecked racism and during the pandemic, videos of people spewing hate while everyone just sits there and ignores it. Do not allow yourself to do that. That behavior is not welcome in our communities.

According to Morrissette, when he took the microphone from a man he identifies as Dorre Love, he was pushed to the ground and says that the group of demonstrators “purposefully broke my leg for the trouble.”

In another tweet, he names Dorre as the attacker.

“A disturbance ensued and the individual is suspected to have been thrown to the ground, where they, unfortunately, broke their leg,” police said.

Two men, both members of the religious demonstrations, were arrested for aggravated assault and mischief. Both of these men were transported to the VPD Jail. They were later released under conditions to stay away from the area and have no contact with the victim. Charges have been recommended but not filed at this time, according to the police.

VPD hate crime investigators have also been called in to investigate if hate was a motivating factor in the assault. They are asking any witnesses they haven’t spoken to to come forward.

The section is also investigating the previous four incidents to see if there is “any criminal element in those investigations.”

Love, who did not identify Morrissette by name, streamed a video to his supporters after he says he was released from jail. He claims he was the victim of assault and is seeking legal advice.

Donations can be made to Morrissette’s recovery fund online.