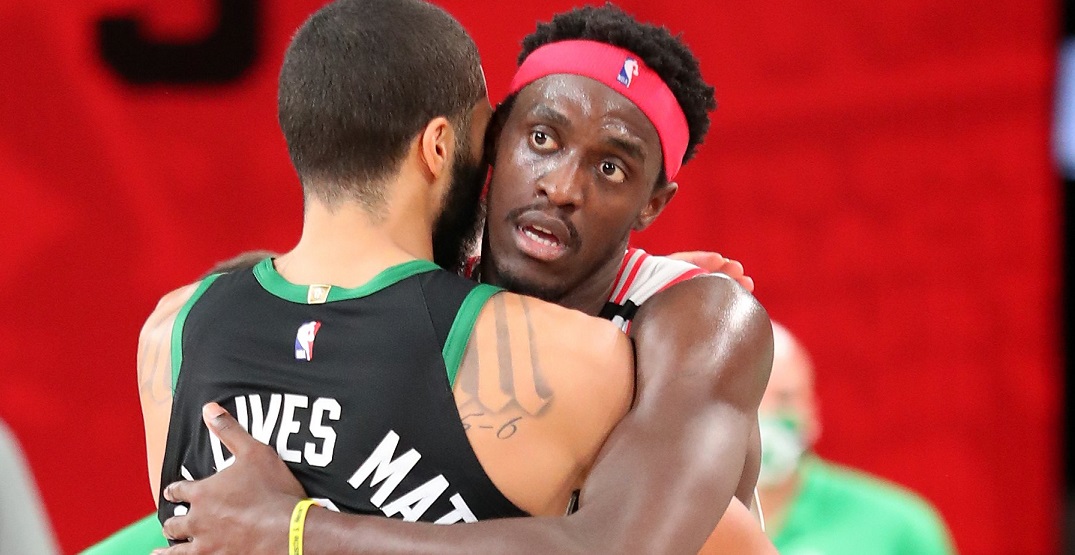 The Toronto Raptors are exiting the NBA’s Orlando bubble.

Following a 92-87 Game 7 loss on Friday night to the Boston Celtics, there are many questions to be asked and fingers to be pointed.

But more so than any other player on the team, power forward Pascal Siakam’s struggles have taken centre stage.

The Raptors’ leading scorer in the regular season fell flat in the series against the Celtics, dropping to a 14.8 point per game average over the seven-game set, a far reach from his career-high 22.3 mark during the regular season.

Siakam himself didn’t shy away from the criticism.

“At the end of the day, I have to be better. Definitely a low moment for me, a learning experience,” Siakam said at the press conference following Game 7. “I wasn’t able to really help my teammates.

During the regular season, the 26-year-old forward was as consistent a scorer as almost anyone league-wide, hitting 15 or more points in 55 of his 60 regular season games.

But Siakam’s final three games in the series against Boston totalled 10, 12, and 13 points respectively, with missed open shots and unforced turnovers combining for an ultimately ugly stat line. A stingy Boston defence had Siakam unable to find open looks and drive to the lane night in and night out. He topped 20 points just once in the series.

There will be plenty of “what-ifs” to point to from Friday’s contest: clock management in the closing minutes, disorganized play-calling on key possessions, and point guard Kyle Lowry uncharacteristically fouling out with under two minutes to play.

More than any of these moments being put under the microscope, it’s not hard to believe a stronger performance from Siakam both in the deciding game and throughout the Eastern Conference semi-finals could have been a difference maker in a tight match up where five games were decided by seven points or less, including all three Toronto wins.

“We had great chances, we tried to hang in there and find ways to win the games,” Siakam said. “As a team, we played well, we fought. We always did it, all season. Even when things weren’t going well, we always fought to the end.”

“Obviously, I didn’t really give what was expected from me,” he said.

It isn’t all doom and gloom for Siakam, though. The team’s longtime leader in Lowry offered words of advice to Siakam following the loss.

Lowry’s own postseason struggles include a pair of Game 7 losses (one with each Toronto and Houston) and being on the wrong end of three sweeps.

Raptors’ Kyle Lowry said he immersed himself in criticism after playoff struggles early in career & recommends Pascal Siakam does the same now: “The advice I would give him: Look at everything. Find out who is saying what. You’re going to use it as fuel.” pic.twitter.com/HnYg7Lt4tp

“He’ll be able to call me whenever. I don’t think he did anything wrong,” Lowry said. “It’s a learning experience, it’s only going to make him a better basketball player.”

It’s hard to believe it was just two years ago when Siakam was averaging 7.8 points per game off the bench, a far cry into the future NBA All-Star he would develop into. The 2018-19 recipient of the NBA’s Most Improved Player Award, Siakam’s time in Toronto has ultimately been a success story.

In last season’s championship run, Siakam emerged as a real star league-wide, which he continued by earning his first starting spot as an All-Star this past season.

On the league’s biggest stage, Siakam has delivered for these Raptors before, with a Game 6 for the ages to close out last year’s Finals.

“I would not be surprised to see him come back more hungry and be destroying people,” Lowry added.

Siakam’s biggest career successes last postseason ultimately came alongside an all-time performance from Kawhi Leonard, a luxury he was obviously without this year. But as a #1 option on the offence he performed admirably for much of the season, as one of the key Raptors as they picked up the second-best record in the NBA.

For now, the next steps are relatively unclear for how Siakam bounces back, as his four-year, $130 million contract extension kicks in next season.

It’s not set what the next NBA season will look like, where the Raptors will play, or even exactly when it will start. But Siakam said the uncertainty and uniqueness around this year’s playoffs weren’t contributing to his struggles.

“At the end of the day, there’s no excuses.” he said. “We’re all pros and we have to be ready. I don’t think it was anything pressure-wise. I just wasn’t at my best.”

While you’ll ultimately be tested against how you perform against the best, one sign of optimism might be that for whatever reason, Boston specifically provided Siakam with more issues than any other top team in the league this season. During a regular season game in the bubble on August 7, Siakam was only able to chip in 11 points in Toronto’s only regular season loss in Orlando during the NBA restart.

And though Boston is shaping up to be a contender in the Eastern Conference for the foreseeable future, Siakam has been able to dominate nearly every other opponent in the league.