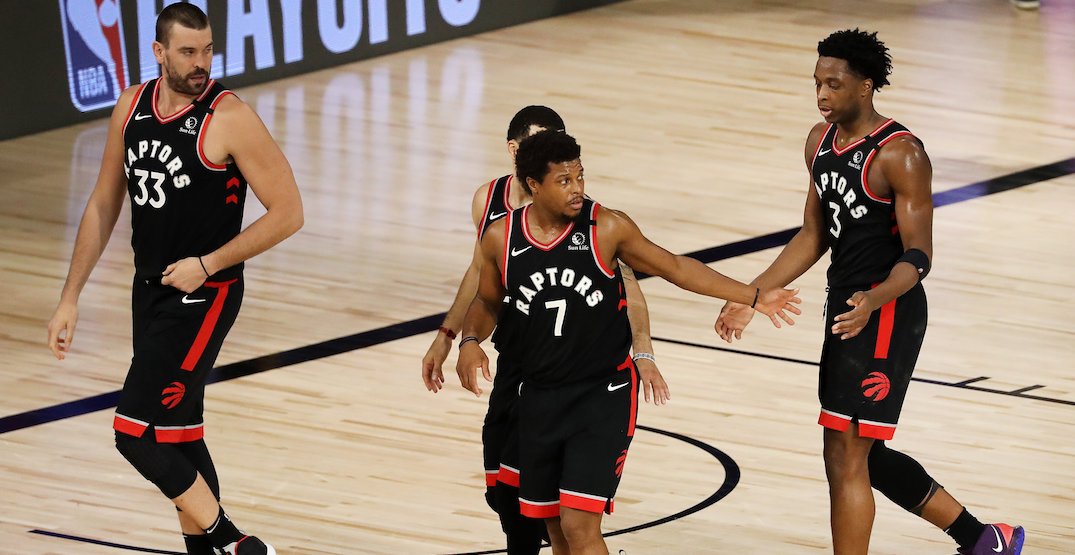 Game 6 of the Eastern Conference semi-finals provided the latest entry in the gospels of Kyle Lowry.

Toronto’s on and off-court leader delivered with a performance for the ages on Wednesday, as the Raptors evened up their second round series 3-3 against the Boston Celtics in a 125-122 double OT win.

In 53 minutes of action, Lowry put up 33 points, six assists, eight rebounds, and two steals. He also made six three-pointers, one off his career playoff high.

Capping off his night in style, Lowry hit a turnaround, one-footed fade-away jump shot from the elbow in the game’s closing stages of double overtime that looked straight out of the Dirk Nowitzki playbook.

The shot all but sealed Toronto’s victory, forcing a crucial Game 7 on Friday night for the chance to advance to the Eastern Conference Finals for the second year in a row, against the Miami Heat.

It’s hard to properly describe how much Lowry has meant to the Raptors, both this season and throughout his career since coming over from Houston in 2012.

The truth is Lowry’s latest performance should just be the expectation, rather than a surprise at this point. There is no one else who’s ever put on a Raptors uniform that’s been able to have such a consistently effective career when the moment counts.

And yet it still feels improbable that the Raptors have the chance to advance to their third Eastern Conference Final in the last five seasons with Lowry once again leading the way. Toronto’s had its fair share of star players come through over the years, but none of them have been as intertwined with so many crucial moments like Lowry has.

Whether it’s the steal and assist in last year’s Game 6 win against Milwaukee to set up Kawhi Leonard’s world famous dunk over Giannis Antetokounmpo, his inbounds pass over 7-foot-5 Tacko Fall to OG Anunoby for his Game 3 buzzer beater in this series, or his 35 points in Game 7 of the 2016 series against Miami to earn Toronto their first trip to the Conference Finals, Lowry’s name is etched everywhere you look when in comes to the Raptors’ lore.

But it’s not been without its troubles, either. There’s been Lowry not getting a decent shot off in the final moments of Game 7 against Brooklyn in 2014, getting his shot deflected with a chance to win the NBA Championship on home court in Game 5 last season against Golden State, and don’t forget being swept out of the postseason in consecutive years in 2017 and 2018 by the Cleveland Cavaliers, (though he was hurt for the final two games of the 2017 series).

Lowry’s been a Raptor long enough to experience the highest of highs, and lowest of lows.

Against Boston, despite losing, having rarely held a large lead in any game in the series and not had all their pieces coming together at once, a gutty Game 6 double OT victory on Wednesday gives head coach Nick Nurse’s team a chance at knocking off the Boston Celtics.

And though they’re an underdog by the betting markets in their own “home” game on Friday night, it’s hard to count out a group of scrappy players with as much experience in high-pressure situations as any team left.

It would be hard to argue that any player in the league emphasizes the ability to be tough as well as Lowry— he’s once again leading the playoffs with seven charging fouls drawn.

When they build Lowry's statue in front of the Raptors arena they shouldn't even put it on a podium. Put it ground level so it really sinks in with folks that this 6 foot flat dude did more for that franchise than anyone else who ever wore that Raptors uniform

From Boston’s perspective, the playoff demons from the 2018 Eastern Conference Finals Game 7 have to be in the back of their heads. It was just two years ago where an upstart Celtics team took a 3-2 lead over Cleveland and were one game away from advancing to the NBA Finals, before LeBron James’ 81 points in the next two games quickly wiped that dream away.

If the rest of the series is any indication, the Raptors won’t be able to blow out Boston. If they’re going to win Game 7, the game will likely once again be tight well into the fourth quarter, and hey, they’re going to need some big plays from the guy who’s been there longer than anyone.

Cliches about who’s clutch and who isn’t largely fall flat in a league where there’s 29 teams that end up unhappy at the end of the season. Whether Toronto wins or loses one game, and whether their 34-year-old point guard delivers shouldn’t change anything about how fans and the league should feel about the organization or Lowry’s career.

Kyle Lowry is not appreciated as he should be #Winner

But, maybe, take the advice from one of Kyle Lowry’s fiercest rivals in Joel Embiid and bet on the #Winner coming through once again.