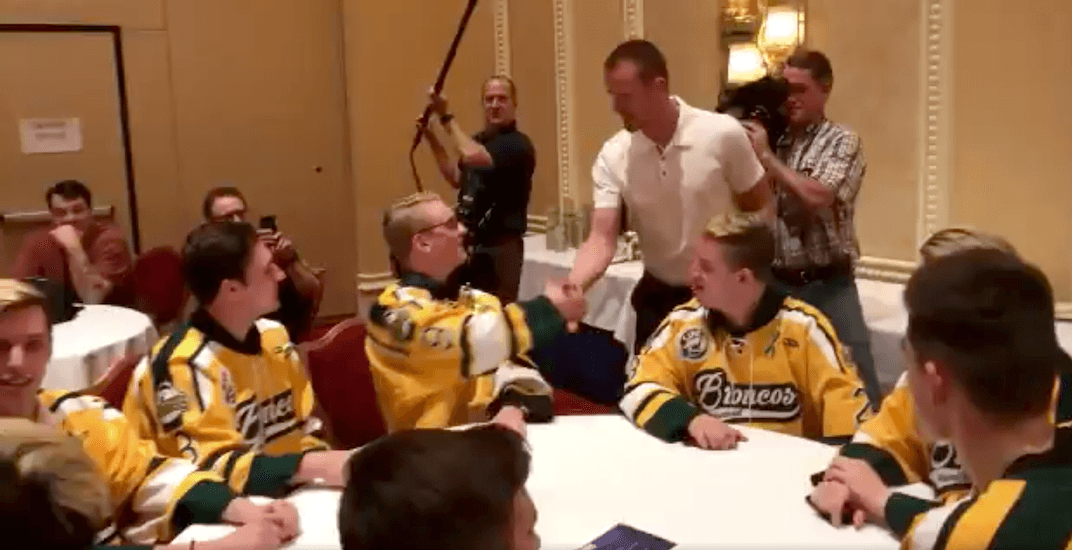 Survivors from the Humboldt Broncos bus crash are getting the thrill of a lifetime at the NHL Awards this week.

Broncos survivors (9 of 13) have reunited for a trip to the NHL Awards in Vegas on Wednesday night. #humboldtstrong #nhlawards pic.twitter.com/xlMmHTaQ5L

Ten members, along with their families, boarded a plane to Las Vegas, where they’re now getting to rub shoulders with the game’s elite – including future Hall of Famers Henrik and Daniel Sedin.

Brock Boeser and Connor McDavid were also seen in the video above, as players are in town for Wednesday’s awards show. The Sedins are up for the King Clancy Award, while Boeser is a finalist for the Calder Trophy.

“It’s an honour to be here and especially to be nominated with my brother. I brought Harry, my son, along and he’s loving this more than I am I think!” – Henrik Sedin pic.twitter.com/6zk6c1Jvtu

The Broncos team will be honoured at the NHL Awards, and their late coach Darcy Haugan has been nominated for the Willie O’Ree Community Hero Award.

More than two months after the tragedy that killed their teammates, 10 of the surviving members of the Humboldt Broncos were reunited for the first time in Las Vegas before the NHL Awards. pic.twitter.com/JfHycbG0nT

The Humboldt news doesn’t stop there, as Washington Capitals centre Chandler Stephenson – a Saskatchewan native – plans to bring the Stanley Cup to Humboldt this summer.

There will be an on-ice skills competition, among other things, between #NHL players in #Humboldt led by #stlblues forward @Bschenn_10

The NHL announced it will also be holding a special event in Humboldt, which will include an on-ice skills competition, led by Saskatoon-born Brayden Schenn.