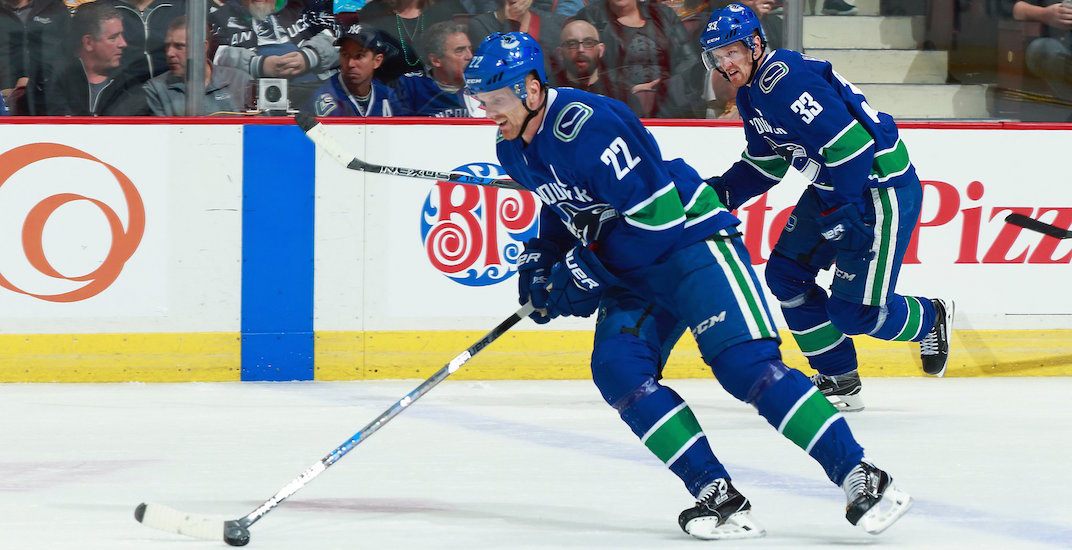 As the Canucks finish up another disappointing season – their third straight year missing the playoffs – tough decisions will need to be made.

Surely, this franchise can’t trot out the same lineup next October and expect better results.

That is, after all, the definition of insanity.

Canucks fans have been going insane watching this team in the second half of the season. The team is falling fast in the NHL standings, which is pleasing to ‘Tank Nation’ but also concerning for their chance of success next season.

Both goaltenders are under contract next year, as are six of eight defencemen – with Troy Stecher and Derrick Pouliot pending restricted free agents, likely to return.

Up front, Vancouver has five unrestricted free agents, and with all due respect to Darren Archibald, Nic Dowd, Jussi Jokinen – only two of them are difference-makers.

I’m of course talking about Henrik and Daniel Sedin, who are in the midst of the greatest Canucks careers of all-time.

Should Vancouver re-sign them? How much money do they deserve? Will they even want to come back?

Those are questions that have lingered all season, but will need to be answered in just over three month’s time.

With prospects like Elias Pettersson, Jonathan Dahlen, and Adam Gaudette on the horizon, there’s the potential for veterans to get pushed out of the way next season. Some may argue that’s a sign the Sedins need to step away, but the reality is there’s a long list of vets that should be moved out of town before two still very effective players.

Excellent for their age

It’s the reason why everyone craps on Alex Edler, and why Phil Kessel was blamed for the Leafs’ struggles in Toronto. Kessel now owns two Stanley Cup rings, by the way.

The Sedins are slowing down, no doubt, but they’ve actually been two of the bright spots with the team.

Sure Henrik has stopped shooting the puck and has just two goals, but he also leads the team in assists.

With 48 points, Daniel leads all NHL players over the age of 33 in scoring this season. His brother isn’t far behind, with 43 points.

They’ve been a big part of the team’s resurgent power play, which has been excellent since November and currently ranks seventh-best in the NHL. They’re each tied for second and third on the team in overall points, even strength points, and power play points.

Henrik and Daniel have done it all averaging just 15:23 and 15:05 of ice time, respectively.

They lead all regulars on the team in even strength Corsi-For percentage, as they usually do. That’s an indication that they’re not the defensive liabilities that some might lead you to believe, because they have the puck more often than not.

And through it all, they’ve managed to stay relatively healthy.

The real issue with bringing back the Sedins is that it could limit opportunities for younger players.

As a rebuilding team, GM Jim Benning needs to make changes this offseason. You can only have so many veterans in your lineup before they prevent younger players from flourishing.

Particularly if rookies push for roster spots, Vancouver will need to clear out some of the veterans on their roster. But should that start with two franchise legends who continue to produce more than most?

The problem is that the rest of their veteran forwards are signed to contracts that will make them difficult to move.

Loui Eriksson has four more years left paying him $6 million per season. He’ll turn 33 this summer and has just 21 goals in his last 115 games.

Brandon Sutter makes $4.375 million, and has three years left on his contract. He has six goals this season.

Sam Gagner – he of seven goals and 27 points – has two more years left on a deal that pays him $3.15 million per season.

If Henrik Sedin doesn’t return, who is the team’s No. 2 centre? Is is Sutter or Gagner? If so, that’s terrifying.

Maybe it’s Pettersson, but that’s a tall ask for a player who has played primarily on the wing in Sweden this year.

Eriksson, Sutter, and Gagner can be traded, but likely not without Vancouver eating salary. It’s something they should consider.

Another very real concern for the Canucks is father time. It catches up with everyone eventually.

The Sedins turn 38 in September, so expecting them to match this year’s production might be too much to ask. Joe Thornton and Patrick Marleau, who are each 38, have managed to do it this year though.

What are they worth?

The big question is what Henrik and Daniel’s next contract will look like.

One-year deals are a virtual certainty, but the dollar figure is up in the air.

They won’t get close to the $7 million deals they’re on now, certainly.

The Sedins are second line players at this stage of their careers, and carry some risk of their games dropping off. They should be paid accordingly, acting as leaders and mentors for the team going forward.

Surely they won’t get more money than Bo Horvat ($5.5 million), but they could slot in near Brandon Sutter at $4.375 million.