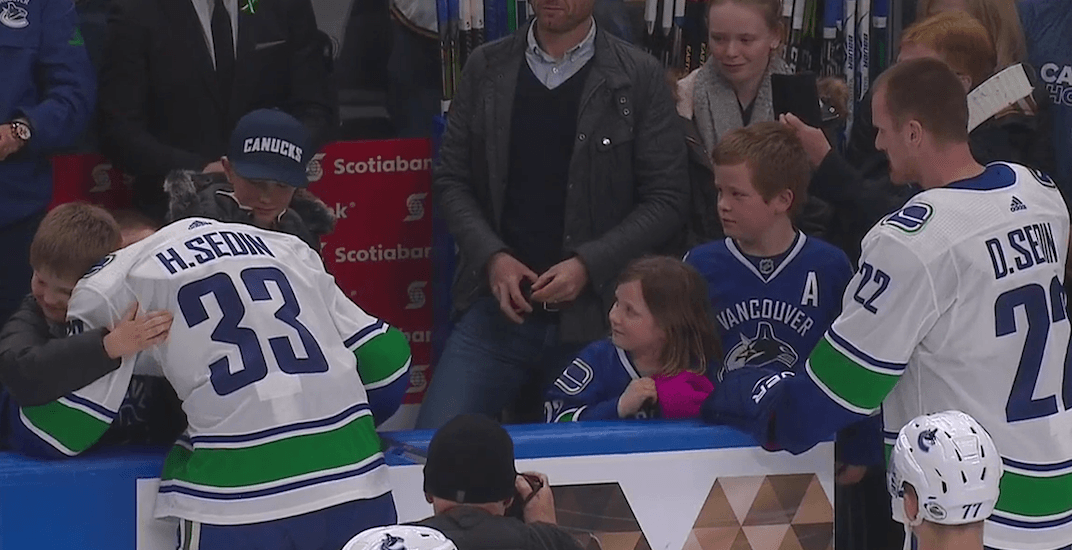 With time ticking down on their NHL careers, Henrik and Daniel Sedin got to share a unique moment with their families.

After moving down to the tunnel during overtime, the Sedins’ families watched from the Canucks’ bench during the shootout in the final game in Edmonton. It was as heartwarming as it gets.

It wouldn't be the final game for the Sedins without their family. #ThankYouSedins pic.twitter.com/Xv2dDnglVF

“That was a big surprise, I was happy to see that,” said Daniel, in reference to the plan to bring their families on the bench. “I think they had a lot of fun and that’s something that they’ll remember for a long time. And us too.”

Henrik and Daniel, along with head coach Travis Green, appeared to be soliciting advice for their final on-ice contributions for the Canucks.

Maybe the Sedin kids’ advice was to keep it simple.

Daniel came in with speed and picked the corner with a wrist shot to open the scoring. Henrik countered by trying a slap shot.

Not known as shootout specialists during their careers, Daniel’s goal was just his fifth in 31 attempts. Henrik finished his career 0-for-7 in shootouts.

Still, it was another great moment in a week filled with great moments, as we watched Henrik and Daniel have fun with their children on the bench.

Daniel Sedin scores in the shootout and the Sedin kids are stoked#Canucks pic.twitter.com/RYhMHQLtLj

The Canucks didn’t get the dream finish like they did on Thursday, losing the game 3-2. But despite ending their careers on the road, Henrik and Daniel received a great sendoff from the fans in Edmonton – and not just from the Canucks fans in attendance.

“Unbelievable. I’ve always enjoyed playing here. I think we’ve had some good battles and a lot of success here,” Henrik said. “To get this here in a rival arena, we did not expect that.”

Saluting the Sedins. There was a great show of respect from the fans and Oilers organization in Edmonton. #ThankYouSedins pic.twitter.com/8akGqVGdzC