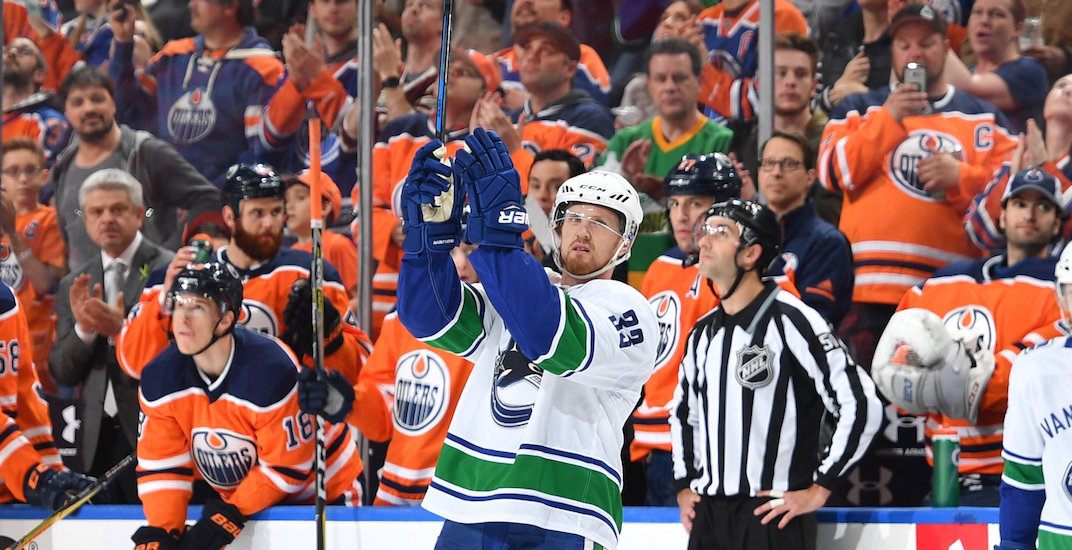 Henrik and Daniel Sedin have been tormenting the Edmonton Oilers for a long time. So Edmontonians, as much as anyone, know how great they are.

Perhaps it should come as no surprise then that Oilers fans gave the Sedins the sendoff they deserved on Saturday.

It was never going to match Thursday’s final game in Vancouver, but Henrik and Daniel’s last NHL game was still special. During a TV timeout in the first period, fans in Edmonton gave the Sedins a standing ovation.

Daniel and Henrik get a standing ovation in Edmonton. #Canucks @Canucks pic.twitter.com/1kGnY7CD9p

It wasn’t all Oilers fans too. There’s always a lot of Canucks fans at games in Edmonton, and probably a few extra for this one.

Check out the Rogers Place concourse during the second intermission:

The Sedins didn’t factor into the scoring in the game, though Henrik Sedin came close to being the overtime hero.

The game went to a shootout, where the Sedins got to share a nice moment with their kids on the bench.

The baby Sedins are by the bench to cheer on their dads! #ThankYouSedins #Canucks pic.twitter.com/5WOEhK4Ali

It wouldn't be the final game for the Sedins without their family. #ThankYouSedins pic.twitter.com/Xv2dDnglVF

Daniel scored in the shootout, while Henrik’s slap shot attempt was stopped. The Canucks ended up losing 3-2.

The Sedins were given another standing ovation after the game. What a great career from two of the classiest players to ever lace up skates.

“We didn’t know our kids were coming to the bench. What a great surprise.” #ThankYouSedins pic.twitter.com/tAbxtL0u3J

To the surprise of nobody, they were class acts until the end.

The final game puck of their careers goes to Derek Dorsett. 😢 #ThankYouSedins pic.twitter.com/9jcLYmeqz9