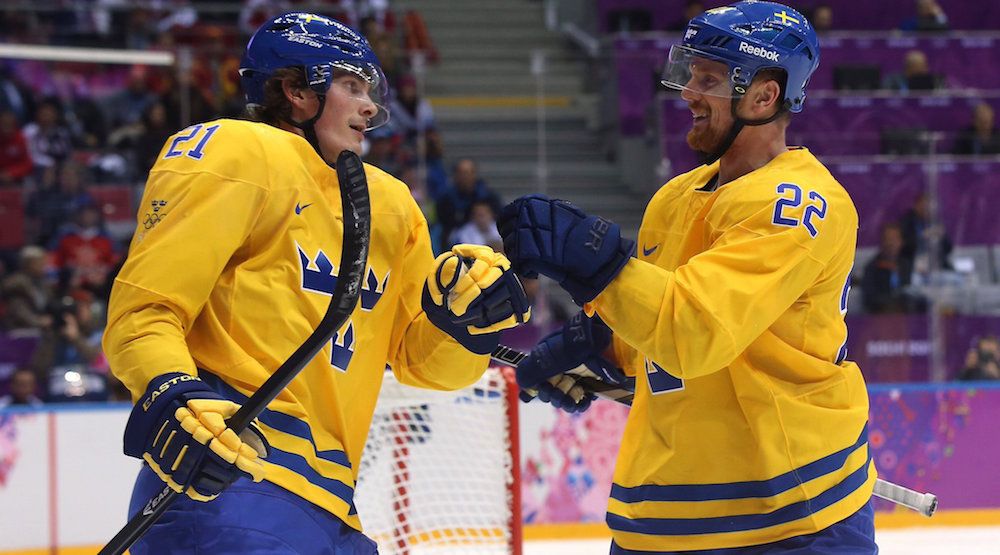 Loui Eriksson will be very familiar with some of his teammates before he steps foot onto the ice at Rogers Arena in October.

The 31-year-old Swede, who signed a six-year, $36 million deal with the Vancouver Canucks this summer, has already played with Henrik and Daniel Sedin with Team Sweden before.

The last time we saw the Sedins and Eriksson together, they were ripping it up at the World Championships in 2013. Sweden, hosts of the tournament, were not playing well with a 4-2 record which included a loss to Switzerland and narrow wins over Belarus (2-1) and Slovenia (2-0).

That’s until the Sedins parachuted in to save the day, helping Sweden to capture the gold medal.

The Canucks, you might remember, were ousted rather quickly from the Stanley Cup Playoffs that spring, being swept in the first round by the San Jose Sharks. Henrik and Daniel joined Team Sweden for the final four games of the tournament.

The result? Eriksson, who up to that point had just one goal and two assists through six games, took off with the twins. He scored seven points (4-3-7) in the final four games. All of his goals were assisted by Henrik, Daniel, or both.

The twins were outstanding as well in those four games, with Henrik scoring nine points (4-5-9) and Daniel scoring six (1-5-6).

Sweden rolled through on the backs of those three players, winning their last preliminary game, as well as beating Canada in the quarters, Finland in the semis, and Switzerland in the final. The Sedins and Eriksson were responsible for 10 of their team’s final 15 goals.

The Canucks trio, along with goaltender Jacob Markstrom, are now members of Team Sweden’s entry at the World Cup of Hockey.

If practice lines are any indication (they are), Sweden will ice an all-Canucks first line when they play their first exhibition game on Thursday against Finland (9 am PT / 12 pm ET on Sportsnet).

Given the age of the three players (Eriksson is 31 and the Sedins turn 36 this month), there should be cause for concern about fatigue. Given the lockout that followed the last World Cup of Hockey in 2004, we haven’t seen the effects of playing a preseason tournament since 1996.

For what it’s worth, the Stanley Cup finalists in the season following the 1996 World Cup were the Detroit Red Wings and the Philadelphia Flyers, who each had seven players on their playoff roster that participated in the tournament.

As long as Sweden keeps the Sedins and Eriksson together, they’re going to get a nice run of games to find chemistry together in a way they wouldn’t during the NHL preseason, where veterans traditionally sleepwalk through games.

More good news, the Sedins and Eriksson (we really need to come up with a catchy nickname for this line) will get time to work together on the power play. Erik Karlsson and Oliver Ekman-Larsson are also on the unit, which will provide everyone with a terrific opportunity to see what the Sedins can do with elite shooters from the point, something they have never had to work with in Vancouver.

The knock against putting Eriksson on the power play with the Sedins is the fact that they’re all left-handed, which doesn’t facilitate one-timers. Again, if the World Championships is any indication, they should be able to get around that disadvantage. Eriksson scored three power play goals in four games with the twins.

If the Canucks’ coaching staff gets creative, perhaps they can get around this left-handedness disadvantage.

First, a bank shot off Eriksson’s leg while creating havoc in front of Finland’s goalie:

Second, finding open ice and finishing off a great pass from Henrik:

Willie Desjardins should have a keen eye on how his players perform. If he’s impressed, bet on them starting the season together. If they don’t, then perhaps Jannik Hansen gets another shot with the twins sooner rather than later.

The World Cup of Hockey begins September 17, while the Canucks begin their first preseason game on September 27.